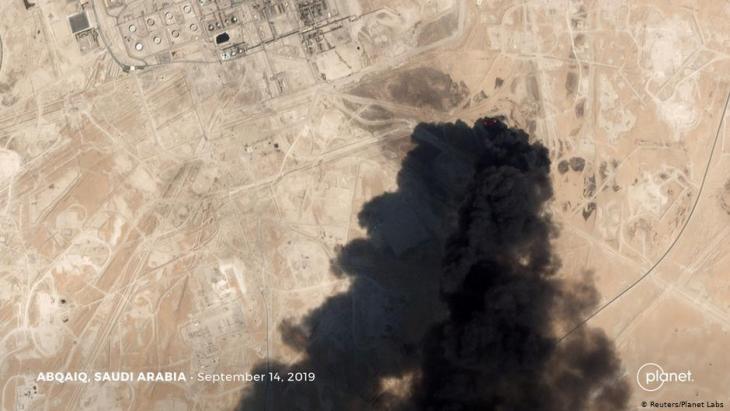 Hitting Saudi Arabia where it hurts

After the drone attacks on two oil plants in Saudi Arabia, U.S. President Trump warned that the USA was ready with a "loaded" weapon to react to the attacks. But against whom is his warning directed? By Karim El-Gawhary

If proof were needed of how vulnerable the Saudi oil industry is – and by extension the global oil market – the world was presented with it this weekend. Drone attacks on two Saudi oil plants belonging to the state-owned Aramco Group in Abqaiq and Khurais hit a neuralgic point in the world economy that until recently had barely featured in the news and of which little is known outside the oil industry.

Having played down the whole matter from the Saudi side with the statement that the resulting fires had been quickly brought under control and that there were neither fatalities nor injuries, it fell to the country's Energy Minister on Saturday evening to reveal the true extent of the effects of the attack.

Striking the heart of the oil industry

The resulting damage to the oil facilities had forced Saudi Arabia to cut its oil production by 5.7 million tonnes a day, he said. This effectively means a reduction in Saudi oil production of 50 percent.  Given that Saudi Arabia produces ten percent of the world's marketed oil, the drone attacks have deprived the global oil market of five percent of its black gold supply at a stroke.

Even more significantly for the markets: Saudi Arabia is by far the most important country in the world with "extra capacity", i.e. a buffer in oil production. This enables the kingdom both to turn on the oil tap overnight to shape the oil price and to compensate for crises in oil supplies in other parts of the world.

Now the global crisis oil buffer has itself been hit. It is still unclear how long it will take to repair the damage and re-start Saudi oil production. At the moment there is talk of the repairs lasting several days. Meanwhile, an oil price shock has set in on the financial markets: in reaction to the drone attacks in Saudi Arabia, oil prices have risen more sharply than at any time in decades. 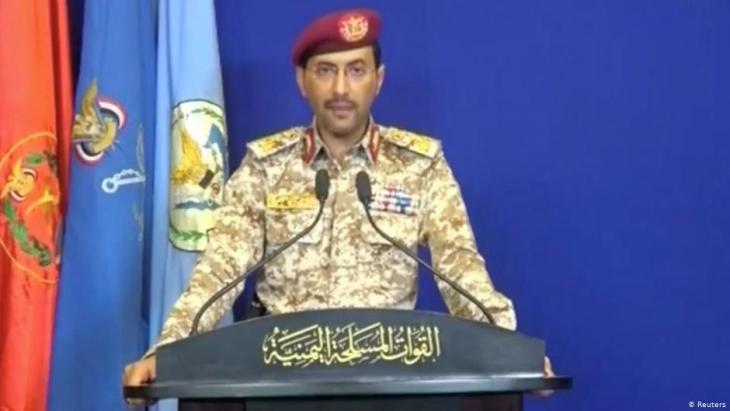 Threatening escalation: following the bombing of Saudi oil facilities, Yemen's Houthi rebels threatened the neighbouring country with further attacks. "We assure the Saudi regime that our long arm can reach any place we want at any time," said Houthi spokesman Jihja Sari

Houthi rebels on a war footing

Who exactly was responsible for the co-ordinated attack? Yemen's Shia Houthi rebels, supported by Iran, claim to have sent ten drones in what would be their biggest operation against Saudi Arabia to date. If that's true, then the Houthis have proven once again that they can strike hundreds of kilometres deep in Saudi territory and in the most strategically sensitive places. In the past, the Houthis have repeatedly attacked airports and oil pipelines with rockets and threats.

They announced further military strikes within Saudi Arabia via their television channel al-Masirah TV. The Saudi royal family would do well to sit up and take notice of another addition that was reported on the Houthi television station. Operations will be carried out with the help of "honourable people" within Saudi Arabia, it was said.

Almost all oil production takes place in eastern Saudi Arabia, which is where the country's Shia minority lives. Already viewed with suspicion by the Saudi Sunni autocracy, they are regarded as second-class citizens. In the past, they have experienced massive human rights violations at the hands of the Saudi security forces. Military and intelligence co-operation between them, the Houthis and Iran itself would constitute a nightmare for the Saudi security apparatus. 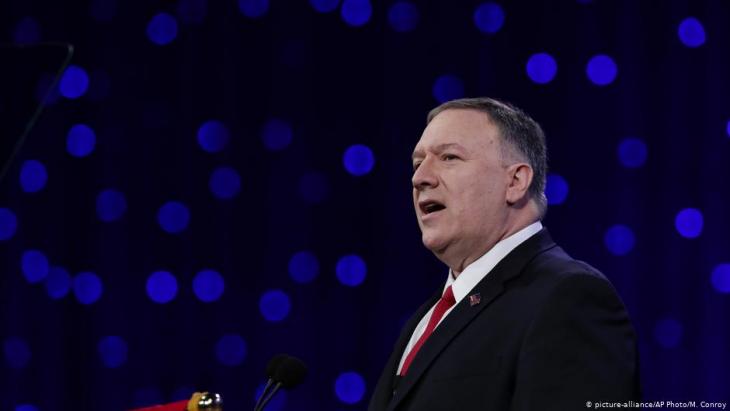 Written on Twitter on Saturday: "Amid calls for de-escalation, Iran has now launched an unprecedented attack on the world's energy supply. There is no evidence that the attacks came from Yemen"

Where did the drones come from?

In a tweet, however, U.S. Secretary of State Mike Pompeo cast doubt on the Houthis' version. He described the attack as an unprecedented attack on the world's energy supply. There is no evidence that the drones came from Yemen, he tweeted. Experts are currently investigating the possibility of the attacks coming from the north, possibly from Iran or its allied Shia militias in Iraq, and whether or not drones or maybe even missiles were used, reported the Wall Street Journal.

Whoever is behind the attacks, the latter are a military embarrassment for the USA and its Saudi allies. Neither the USA as Saudi Arabia's protecting military power, nor the weapons that Saudi Arabia has bought in deals worth billions, especially from the USA, were able to prevent these attacks, which used relatively simple technology.

Whether the attacks were carried out by Houthi rebels allied with Iran, Shia militias, Shias in Saudi Arabia or Iran itself, one thing is for sure: Saudi Arabia and the USA will point the finger at Tehran, as they did when oil tankers were attacked in the Gulf a couple of months ago.

What is also certain is that these attacks will increase tensions with Iran in the region and worldwide, without necessarily triggering a retaliation. The strike against the Saudi oil plants could also be read as a message of deterrence, demonstrating the scope of Iran's own ability to respond to military attack.

Turkey's parliamentary and presidential elections are scheduled for June 2023. But they are already casting a shadow. While the opposition is calling for early elections, ... END_OF_DOCUMENT_TOKEN_TO_BE_REPLACED

Despite promises to the contrary, the social and economic situation in Iran deteriorated under President Rouhani, prompting two nationwide revolts in recent years. Yet the social ... END_OF_DOCUMENT_TOKEN_TO_BE_REPLACED

Starting 29 May, the "Epic Iran" show at London's Victoria & Albert Museum delves into 5,000 years of art, design and culture of the country. ... END_OF_DOCUMENT_TOKEN_TO_BE_REPLACED

By stage-managing his re-election in a poll widely dismissed as a farce, Syria's President Bashar al-Assad has killed two birds with one stone: he has forced his compatriots to ... END_OF_DOCUMENT_TOKEN_TO_BE_REPLACED

On the face of it, the Iran of 2021 still bears considerable resemblance to the Islamic theocracy that was established following the overthrow of the Shah in 1979. Yet, although ... END_OF_DOCUMENT_TOKEN_TO_BE_REPLACED

Among the authors writing in German who are not native speakers of the language, SAID, who was born in 1947, was among the most successful and the most unconventional. Highly ... END_OF_DOCUMENT_TOKEN_TO_BE_REPLACED
Author:
Karim El-Gawhary
Date:
Mail:
Send via mail

END_OF_DOCUMENT_TOKEN_TO_BE_REPLACED
Social media
and networks
Subscribe to our
newsletter