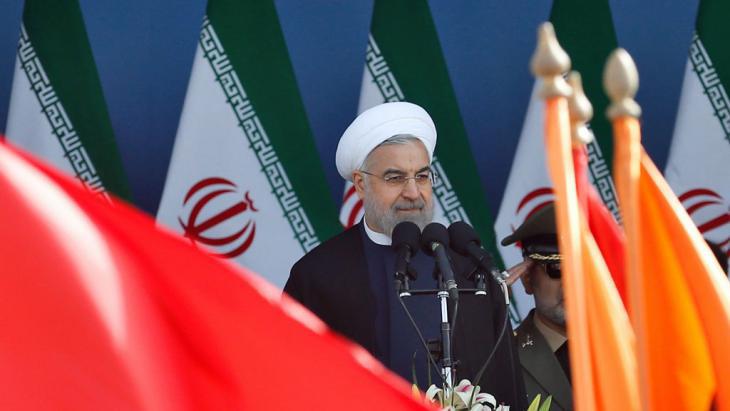 How the West views Iran's leaders

A sober and critical eye is needed

Has Iran really undergone fundamental change since President Hassan Rouhani took office? Observers shouldn't allow themselves to be deceived by the current trend towards rosy political analyses, warns Ali Fathollah-Nejad, a German–Iranian political scientist, who points out that developments in the Islamic Republic are characterised by continuity

When it comes to reporting on Iran, a glance at the majority of political analyses reveals a noticeable reversal in attitudes in recent times. Since the pragmatist Hassan Rouhani became president two years ago, the policies of Tehran have been presented in an almost glowing positive light. By contrast, the policies pursued during the presidency of hardliner Mahmoud Ahmadinejad were portrayed as the incarnation of evil.

Yet both then and now, such narratives are ill-suited to capturing the complex realities of the Islamic Republic. It almost seems as if observers would like to support international negotiations with their well-meaning reports.

For example, many analyses suggest that the Islamic Republic has undergone fundamental changes under Rouhani, when in fact it is more true to say that every change – and there have indeed been some – takes place within a continuity.

There is no denying the rivalries between factions of the exclusively Islamist spectrum. However, this rivalry obscures the fact that across the spectrum, the political elite shares a common denominator: its absolute priority is the survival of the regime.

On the other hand, those interpretations of events that ignore all the changes that have taken place in Iranian politics are in no way convincing. They tend to be dogmatic, especially those that run like a mantra through the commentaries on Iran produced by neo-conservative circles in Israel and the West.

It is true to say that the new foreign policy school of thought represented by the new Iranian government is a standard bearer for reconciliation with the West. At the same time, however, the ominous policies being pursued by the Revolutionary Guard in both Iraq and Syria are hardly ever mentioned. 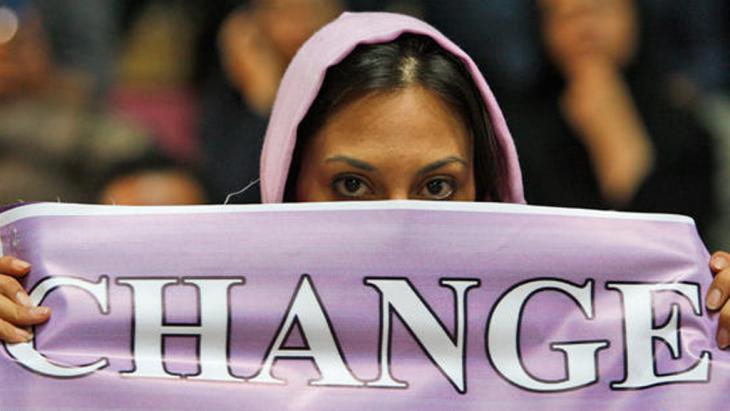 "Well-meaning experts fail to recognise the extreme severity of the problems in Iran. The vast majority of the population remains systematically excluded from participating in the political and economic decision-making process. The sanctions imposed by the West have not weakened the authoritarian state, but instead have increased its power over society," writes Ali Fathollah-Nejad. Pictured here: a woman demonstrates for change in Iran

In addition, well-meaning experts fail to recognise the extreme severity of the problems in Iran. The majority of the population remains systematically excluded from access to political and economic participation. The sanctions imposed by the West have not weakened the authoritarian state, but have instead increased its power over society.

There can be no positive development in the country as long as the rates of unemployment and poverty remain alarmingly high, as long as the exodus of trained specialists remains at record level internationally, as long as there is repression of dissidents, minorities, women, students, workers and their social movements, and as long as press censorship exists and cultural and academic freedoms are limited. The tragic reality of Iran also includes the fact that the country has the highest execution rate in the world and faces calamitous environmental problems.

Some commentators lead us to believe that the Rouhani government intends to tackle all these problems. Yet, the budget plan for the current year indicates the exact opposite: he is cutting social spending, while at the same time stocking up funding for the security and military apparatus. In other words, it doesn't look as if Rouhani intends to alleviate the suffering of the half of the country's population that lives below the poverty line or to weaken Iran's authoritarian structures.

Without a doubt, the process of negotiation and rapprochement between Iran and the West is long overdue and should be continued. However, it would be preferable – and perhaps even necessary – for observers to refrain from engaging in an evident display of "political support" for this process, and instead offer a sober and critical account of the situation surrounding Iran.

After all, only independent analyses are useful for policy guidance or academic research. The independence of these analyses can be measured by the way they identify power structures and gauge the interests on all sides.

By contrast, those analyses that exclusively limit themselves to the viewpoints of the elite tend to cloud our view of socio-economic and socio-political fault lines. And, as the "Arab rebellions" so clearly demonstrated, these fault lines could be of decisive importance for future developments.

Drawing on the history of Tehran's Shahr-e No red light district, Nasrin Bassiri describes how prostitution functioned in Iran before the Islamic Revolution. The neighbourhood ... END_OF_DOCUMENT_TOKEN_TO_BE_REPLACED

International relations are shifting across the Middle East as regional powers adapt to America's retrenchment and China's growing influence. Although the region could become the ... END_OF_DOCUMENT_TOKEN_TO_BE_REPLACED

Tea is a mainstay of popular culture across the Middle East, from Morocco to Qatar. Tucked away in Tehran's Grand Bazaar is arguably the world's tiniest tea shop. The owner's ... END_OF_DOCUMENT_TOKEN_TO_BE_REPLACED

No other Western poet was arguably so well-versed in the Koran or so fascinated by Islam as Germany's national hero, Goethe. In a new publication that examines all Goethe's ... END_OF_DOCUMENT_TOKEN_TO_BE_REPLACED

A deluge of books, movies, series and cover stories: ever since the events of 9/11, the West has seemed almost manically preoccupied with Islam. Yet this has rarely led to deeper ... END_OF_DOCUMENT_TOKEN_TO_BE_REPLACED
Author:
Ali Fathollah-Nejad
Date:
Mail:
Send via mail

END_OF_DOCUMENT_TOKEN_TO_BE_REPLACED
Social media
and networks
Subscribe to our
newsletter