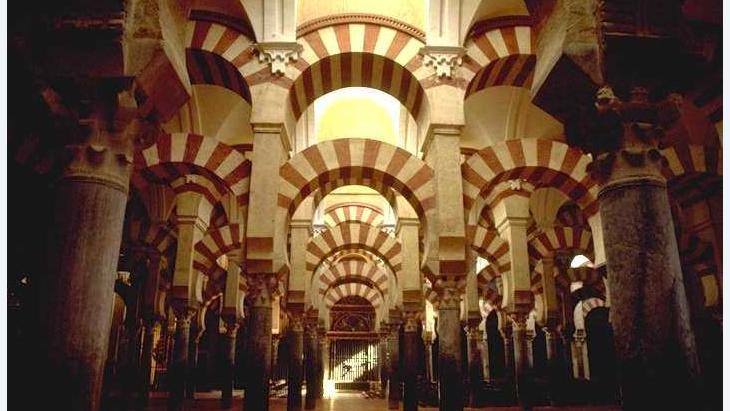 Lewis Gropp reviews a documentary that shines the spotlight on two 12th century philosophers – one Muslim, one Jewish – whose messages of positive coexistence resonate very strongly even today, refuting the "Clash of Civilizations" theory

Out of Córdoba is a documentary film about the greatest but least known chapter in European history: Muslim Spain. For almost 800 years, vast swathes of the Iberian Peninsula were under Muslim control.

Al-Andalus, as Moorish Spain was known, is to this day viewed as an era marked by tolerance, with Jews, Christians and Muslims living for the most part peacefully together under the banner of convivencia (coexistence). Córdoba was the capital in a region that represented a leading cultural and economic centre – of both the Mediterranean and the Muslim world as a whole.

​​In Out of Córdoba, which was released last year, Jewish-American filmmaker Jacob Bender counters the idea of the clash of civilisations by invoking the tolerant spirit of Córdoba and tracing the life stories of two 12th century philosophers: the Jewish Maimonides and the Muslim Ibn Rushd.

As Bender explains at the start of his film, following the terror attacks on his home city of New York, he felt the need to discover new hope and idealism as a way of refuting the clash theory.

Retracing history in the spirit of Ibn Rushd and Maimonides and, to a certain extent, Bender's own pilgrimage of hope, shows that tolerance and free thought – historically and today – can help bridge even the most entrenched divides.

Maimonides and Ibn Rushd were philosophers, legal scholars and doctors who were proponents of Aristotelian ideas and advocates of logical and free thought. In modern day Córdoba, the film follows Bender as he meets people who are inspired by the spirits of both men, among them an imam that reads out a fatwa, a religious opinion, against Osama bin Laden, branding him an infidel owing to his violent crimes. 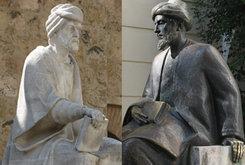 Advocates of logical and free thought who pioneered in critically examining their own religious traditions: the statues of of Ibn Rushd and Maimonides in Córdoba

​​Bender also speaks to the Spanish Foreign Minister Miguel Ángel Moratinos, who says that Maimonides and Ibn Rushd are an expression of his work as a diplomat. The two figures are historical examples, Moratinos explains, that the coexistence of Judaism, Christianity and Islam does not inevitably lead to conflict and confrontation, but that it can be a mutual inspiration to aspire to extraordinary cultural achievements.

The film's audience accompanies Bender as he retraces the historical journeys of Maimonides and Ibn Rushd across the Mediterranean region. He heads to Morocco where he meets André Azoulay, a Jewish citizen and senior adviser to the Moroccan king.

Azoulay speaks of cultural dialogue and emphasises how urgently we need to listen to the message of tolerance of both these men from Córdoba. "Maimonides taught us Jews to make our Judaism an instrument of reconciliation, not a dogmatic tool where fundamentalism finds refuge," he says. "In the Muslim world, Ibn Rushd represents the same rationalism." 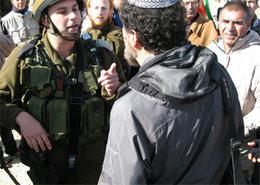 "We must find a way to see God's image in our Muslim brothers and sisters": Rabbi Arik Ascherman in an argument with an Israeli soldier

​​One of the film's most moving moments is Bender's encounter with Rabbi Arik Ascherman in Jerusalem. Bender says that he could initially see no scope to include contemporary politics in a film about Maimonides. Efforts by Ascherman to secure Jewish-Muslim reconciliation – with recourse to Jewish religious traditions and Maimonides – seemed to suggest otherwise.

"One thing that Maimonides taught us is that you can't hide your head in the sand; you can't avoid tough issues," says Ascherman. "You have to grapple with them head on. We must resolve the conflicts we're confronted with. And so we must find a way to see God's image in our Muslim brothers and sisters."

Ascherman's view is that the status quo should be turned on its head and religion made a part of the solution in the Israeli-Palestinian conflict. In a voice quivering with outrage, the Rabbi describes the injustices and the violence that have befallen many Palestinians as bulldozers destroyed their houses in East Jerusalem.

Ascherman describes his organisation, Rabbis for Human Rights, as the "conscience of Israel", a place where rabbis campaign for the rights of their compatriots, Israeli Palestinians and Palestinians in the Occupied Territories. 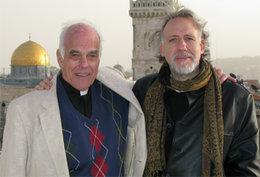 "A pilgrimage of hope": Jacob Bender (right) with Rev. David Burrell, Professor of Philosophy, Notre Dame Universitiy, in the Old City of Jerusalem

​​The film's last word goes to David Burrell, a Christian professor of theology, who stresses that Ibn Rushd and Maimonides were pioneers in critically examining their own religious traditions, and who engaged with traditions that were not initially theirs.

In the end, after following in the footsteps of Ibn Rushd and Maimonides and seeing today those who are still very much inspired by these figures, Bender looks at the silhouette of Jerusalem, a city which has become a synonym for human discord, and he says that at the end of his journey, he cannot but help be inspired to believe in the possibility of alternatives to the clash of civilisations and the power of interfaith reconciliation.

Turkish author and journalist Mustafa Akyol is one of the foremost pioneers of an Islam reconciled with modernity. Musa Bagrac spoke with Akyol for Qantara.de about his new book " ... END_OF_DOCUMENT_TOKEN_TO_BE_REPLACED

A bird's eye view of eight hundred years of history: Brian A. Catlos tells the story of Al-Andalus in the style of a streaming series and deconstructs the myths of the Reconquista ... END_OF_DOCUMENT_TOKEN_TO_BE_REPLACED

Known to Jews, Muslims, and Christians by three different names – Sefarad, al-Andalus, and Hispania, respectively – the Iberian Peninsula has been a centre of fertile intellectual ... END_OF_DOCUMENT_TOKEN_TO_BE_REPLACED

A heated debate is raging in the Islamic world about whether the religious and political spheres in Islam are one and the same. Before this matter can be settled, the terms " ... END_OF_DOCUMENT_TOKEN_TO_BE_REPLACED

On their fourth CD "Irade" (willpower), Masaa has left its piano sound behind, yet continues with its new guitarist to pursue a path that bridges jazz improvisation and Arabic ... END_OF_DOCUMENT_TOKEN_TO_BE_REPLACED

Muhyiddin Ibn Arabi (1165-1240) is one of the most influential Arab philosophers and mystics. James Morris, Professor of Islamic Theology at Boston College, explains why his ... END_OF_DOCUMENT_TOKEN_TO_BE_REPLACED

Comments for this article: The Muslim-Jewish Heritage of Islamic Spain

When Jerusalem was conquered by the Crusaders during the middle ages, Arab Muslims, Christains and Jews were massacred. They spared no body. After 100 years when Jerusalem was reoccupied by the Muslims, not a single Christian and a Jew was slaughtered. Saladin should be taught in European and American schools.Saladin should be included in European curricula, says Thorvald Steen.

Leading Norwegian writer has criticized the education given to children in European schools, saying it is misleading and arguing that a Kurdish-Muslim commander “who opened Jerusalem to all religions” after conquering it over 800 years ago should be presented as a childhood hero for them.

“He was an enormously important figure, and he is not mentioned in our books,” said Thorvald Steen about Salah ad-Din Yusuf ibn Ayyub -- better known as Saladin in the West -- who defeated and took Jerusalem back from the Crusaders in the battle of Hattin in 118. He did not seek revenge though his generals wanted it greatly after 87 years of oppression and depression at the hands of Crusaders. He could easily smash the entire city, but he did not do that and took a rather tolerant and peaceful approach, Saladin, a devout Sunni Muslim, united Muslims against the Crusaders in Jerusalem and formed a huge army famous for its chivalry which was also supported by minority Christians and Jews at the time.

Richard the Lionheart was profoundly affected by Saladin’s pluralist and tolerant personality. Following a direct order from Pope Gregory VIII, Richard the Lionheart led the third crusader army against Saladin in 1191 after he’d conquered Jerusalem four years earlier. “The real provocation for the pope was that Saladin opened Jerusalem to all religions,” Steen said, arguing that the “pope’s teaching at the time was ‘You crusaders must bring Saladin’s head to Rome, and the more non-Christians you kill the faster you rise to paradise.

Though he managed to defeat Saladin’s army in the battle of Arsuf, Richard the Lionheart failed to retake Jerusalem from him, eventually returning home after coming to an agreement with the Muslim commander for Jerusalem to stay under Muslim control but be open for Christian pilgrims. “Richard was a cruel fundamentalist, but he became a confused fundamentalist after discovering that the world is much different than what he thought,” Steen noted, adding, “Richard was shocked about Saladin, who he thought the devil’s man being at such a high level.” The Norwegian author argued, however, that intense propaganda was carried out in Europe to exalt the Richard the Lionheart after his death. Steen stressed that the reason William Shakespeare did not write about Richard the Lionheart is because “he is too perfect to write about in Shakespeare’s style where characters are represented with their good and bad sides together.” The way he presented Saladin has been admired, especially among Muslims.

UNO has taken a right decision to hand over Jerusalam to Muslims because they are going to do justice and tolerate and respoect those who are differnt. Still one of the shrine of Jesus(peace be upon him) is under the control of Muslims who give it full respect and honour.
IA
http://www.londonschoolofislamics.org.uk

END_OF_DOCUMENT_TOKEN_TO_BE_REPLACED
Social media
and networks
Subscribe to our
newsletter