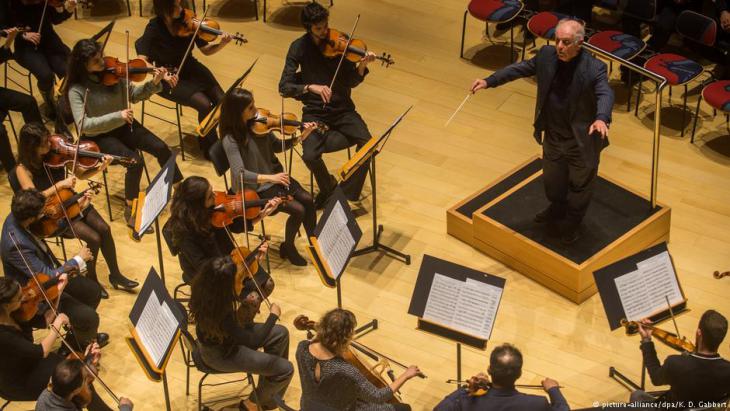 The Pierre Boulez Hall of the new Barenboim-Said Akademie celebrated its grand opening in early March in the centre of Berlin. Sonja Hegasy attended the opening concert

"Go there, habibi. Go there and meet with these people. You are part of the new generation." With this slogan, the Barenboim-Said Akademie (BSA) in Berlin has been advertising its current exhibition called "Music for the Thinking Ear," which details the history of the West-Eastern Divan Orchestra.

The exhibition spans the period from the founding of the orchestra in 1999 to the opening of the BSA late last year. Concurrent with the exhibition, the music academy opened in early March with a brilliant concert week and a 3½ hour concert in its new Pierre Boulez Hall, designed by the architect Frank O. Gehry.

The concert hall features two oval shaped tiers seating up to 680 visitors in a spacious and bright gallery. The interlocking ellipses of the tiers result in a hall that is both surprisingly open and accessible. A flexible seating arrangement allows for listeners and musicians to be separated by only a few metres. The Pierre Boulez Hall has succeed in realising the desire for a flexible concert hall that creates a real sense of intimacy between the public and musicians.

Just opposite the hall are rehearsal spaces for students and a physiotherapy room for the up-and-coming musicians. In 2012, the West-Eastern Divan Orchestra was given a 99 year lease on the building for a symbolic 99 euros. Reconstruction of the Neoclassical edifice, built in 1955 to serve as the set depot for the Berlin State Opera, cost some 34 million euros. Both the star architect Frank Gehry and acclaimed acoustician Yasuhisa Toyota, who was responsible for the acoustics of the Elbphilharmonie in Hamburg, donated their services to the Barenboim–Said Akademie.

A factory for young talent

The Barenboim-Said Akademie is a state-recognised, private music conservatory. It offers degrees in all orchestral instruments, piano, composition and conducting. The academy does not, however, offer any voice training. The academy only accepts exceptionally musically talented young people from the Middle East and North Africa.

Over the next four years, some ninety students will begin their studies here, having a choice of two degrees, either a Bachelor of Arts in music or a post-graduate Artist Diploma for those pursuing a career in music. Students in the four-year Bachelor programme receive a scholarship for the duration of their studies.

The German Foreign Office supports the music conservatory with an annual four million euros. The academy's 37 first-year students from the Arab world, Israel, Turkey and Iran have already begun their music studies. The goal is to train exemplary musicians and critical world citizens. Musical training is therefore linked to a studium generale in the humanities, overseen by programme director Dr. Roni Mann, with courses in history, literature and philosophy.

The musical programme of the Boulez Hall and the transnational music of the West-Eastern Divan Orchestra challenges both musicians and the public to reassess conventions. Daniel Barenboim is particularly interested in new compositions from the 20th and 21st centuries. Twice a year, the concert hall will feature premiere performances, with special focus on composers from the Middle East. 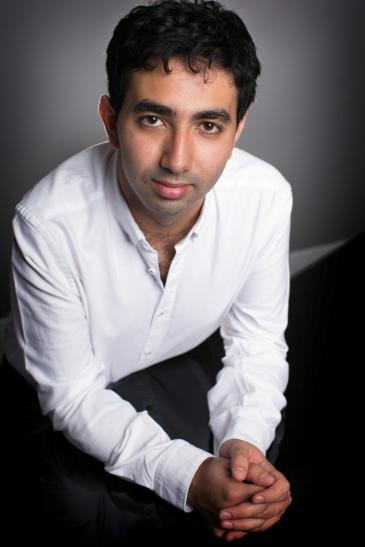 A born musician: Karim Said, who is related to Edward Said, was discovered by Daniel Barenboim at the age of 10. When he first heard the young Said in 1999, Barenboim commented, "What you can't learn, he already knows." Said subsequently studied piano, composition and conducting in Britain. He is now based in Berlin. The newly established Berlin Boulez Ensemble, of which Said is a member, is primarily made up of musicians from the West-Eastern Divan Orchestra and the Berlin Staatskapelle

Pierre Boulez (1925–2016), the namesake of the new chamber music hall, naturally featured prominently in the opening programme with his works Initiale for seven brass instruments and sur Incises for three pianos, three harps and three percussion. Also on offer were works by Franz Schubert, Wolfgang Amadeus Mozart and Alban Berg.

The German clarinettist Jorg Widmann, who is an Edward Said Professor at the BSA, played his own 1993 composition Fantasie fuer Klarinette solo. The 29-year-old Palestinian pianist Karim Said impressed the audience with his performance of Alban Berg's Chamber Concerto for piano, violin and 13 wind instruments from 1925.

"What you can't learn, he already knows"

Karim Said, who is related to Edward Said, was discovered by Daniel Barenboim at the age of 10. When he first heard the young Said in 1999, Barenboim commented, "What you can't learn, he already knows."

Said subsequently studied piano, composition and conducting in Britain. He is now based in Berlin. The newly established Berlin Boulez Ensemble, of which Said is a member, is primarily made up of musicians from the West-Eastern Divan Orchestra and the Berlin Staatskapelle.

Karim Said says that the musicians who play here are those for whom it is already logistically difficult to get together. First and foremost, he values the professional opportunities that are made possible through this cooperation: "As a professional musician, I do not need to agree politically with a colleague in order to work with them and I would certainly never let a colleague's race, religion or nationality be a determining factor in a collaborative performance. The West-Eastern Divan was founded on the principle that we can work with each other, even if we do not agree with each other. I do not share my political views in public."

This collaborative music making is based on the humanistic idea that musicians should have the opportunity to meet at any time or any place solely as individuals, without being burdened by ideological strait jackets or surrogate debates. The academy helps the young musicians to learn to listen to each other as well as to listen very precisely and also promotes the ability of letting others have their say.

The excellent acoustics of the new Pierre Boulez Hall certainly assist in this respect. The current concert programme focuses on European and Arabian classical and modern music. The first season features the world-renowned oud player Naseer Shamma, the Damascus Festival Chamber Players and the Trio Hiwar. And there will be new musical encounters, such as that between the two clarinettists Jorg Widmann and Kinan Azmeh.

Humanism is the final line of defence

Barenboim himself once said that Berlin wasn't the right location for the Akademie, but that it should rather be based in Ramallah, Tel Aviv, or Damascus. The location has also been criticised by those in the Middle East. Barenboim, however, defends the project: Berlin is the right alternative site – both for music and for the students.

At the same time as the start of the new programme of the Pierre Boulez Hall, the search has begun for a home in Berlin for the Naseer Shamma Oud House of classical Arabic string instruments.

Edward Said, who was trained in classical piano and enjoyed perfect pitch, recognised how music offered young people trapped by boundaries access to universal basic values. "Humanism is the only and, to be more precise, the final line of defence that we have to protect ourselves from inhuman excesses and injustices, which disfigure our collective human history."

Dalia Hatuqa is an experienced journalist who has reported on the Israeli-Palestinian conflict from Ramallah, Washington DC and Amman. A writer for Time Magazine, Foreign Affairs ... END_OF_DOCUMENT_TOKEN_TO_BE_REPLACED

Since President Abdul Fattah al-Sisi seized power in Egypt in 2013, he has ruled the country with an iron fist. Civil society, opposition and free press struggle to survive. Tens ... END_OF_DOCUMENT_TOKEN_TO_BE_REPLACED

Many Turks are dissatisfied with the international status of their country. At the same time, opinion polls reveal great scepticism among the Turkish population towards the USA. ... END_OF_DOCUMENT_TOKEN_TO_BE_REPLACED

The German government is planning to legalise cannabis before the end of this legislative period. So what does Islam have to say about its consumption? Will changing the law alter ... END_OF_DOCUMENT_TOKEN_TO_BE_REPLACED

In his latest book, Navid Kermani poses questions about God. It feels like no one could have done it better. His writing elicits smiles, doubt and wonder. By Melanie Christina Mohr END_OF_DOCUMENT_TOKEN_TO_BE_REPLACED
Author:
Sonja Hegasy
Date:
Mail:
Send via mail

END_OF_DOCUMENT_TOKEN_TO_BE_REPLACED
Social media
and networks
Subscribe to our
newsletter