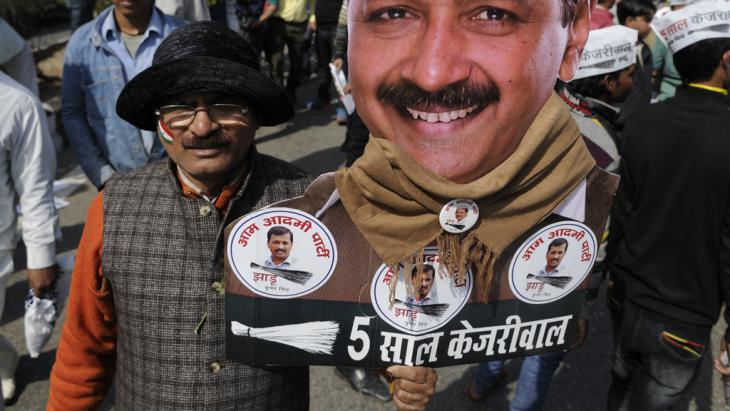 This is an epic comeback for Kejriwal, who is often referred to as the "Julian Assange of India". Kejriwal first entered politics in 2013 with the launch of his Aam Aadmi Party (AAP, which means "the Common Man's Party"). It has promised the voters "clean" politics, and its election symbol, a broom, symbolises the party's anti-corruption ideals.

The country's "common man", frustrated by inflation and the corrupt political environment, identifies with Kejriwal. His party offered the voters an alternative to India's two major political forces, the Hindu Nationalist BJP and the Congress party.

Prime Minister Modi has been touted as "a polarising politician" and his party is frequently accused of indulging in "communal politics". For its part, Congress suffered a setback when it came to light that many of its party members were involved in corruption scandals when the Commonwealth Games were held in India. 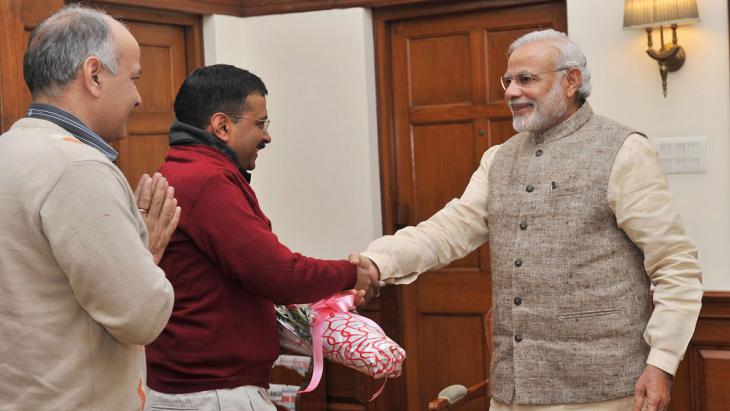 Arvind Kejriwal (centre) meets Indian PM Narendra Modi (right) in the presence of AAP leader Manish Sisodia (left) in New Delhi. Kejriwal's party, which ran on an anti-corruption platform, crushed India's ruling Bharatiya Janata Party (BJP) in an election for the Delhi assembly, smashing the aura of invincibility that has surrounded Modi since he swept to power in 2014

The BJP won the national elections last year with Modi as the face of its campaign. The Muslim community was sceptical about the future of the country under Modi. During his time as the chief minister of Gujarat in 2002, the country witnessed communal violence; hundreds of Muslims were killed in religious riots. For this reason, the Muslim community has always been a vote bank for Congress.

Fahim Shah, an IT Analyst in Delhi, voted for the AAP in this election because he is against communal politics and has been disappointed by Congress. "We as Muslims have always voted for Congress, but with the corruption scandals and the inflation, Congress has failed to deliver. The BJP, however, was ruled out as a choice. AAP is an up-and-coming party, and I wanted to give them a chance."

Shah went on to say that since Modi came to power, the country's Muslims have felt a difference. "I have to ask myself: is it a crime that I am a Muslim staying in India? Why then am I discriminated on the basis of my religion? Being a Hindu does not make someone more of an Indian."

Debates about sensitive issues like Love-Jihad, inter-faith marriage and religious conversions have resurfaced and plague the Muslim community. Shah told Qantara.de "There is an anti-Muslim wave, and the discrimination towards Muslims has increased. In my everyday life, people around me recklessly pass offensive religious comments. These feelings have been inculcated in the minds of the people by BJP."

The AAP, on the other hand, is a new party that did not play the communal card to attract voters. On the contrary, the party declined the support of Shahi Imam Syed Ahmed Bukhari of the Jama Masjid Mosque in Delhi. A few days before the election, Bukhari issued a statement urging the Muslim community to pledge their support to Kejriwal. The AAP promptly rejected the support in a press release, dubbing it "an attempt to communalise the atmosphere".

Ashis Nandy, a political expert based in Delhi, elaborated on the communalisation element in elections. He told Qantara.de: "It has become a trend in Indian politics for everybody to talk about protecting the minorities. Kejriwal, however, did not invoke the communal issue at all during his campaigning and, despite this, the minorities voted for him in huge numbers." 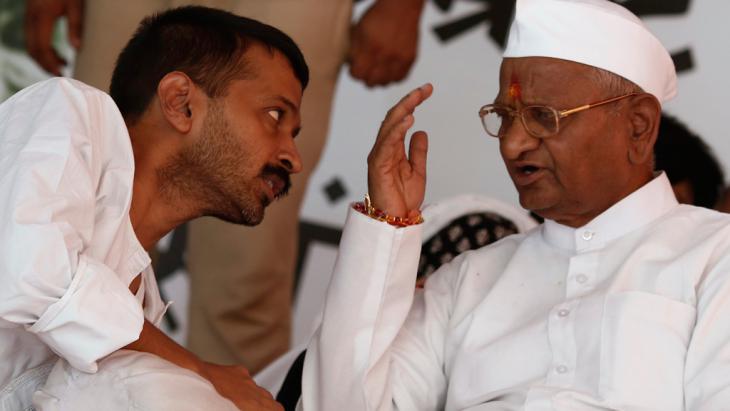 Anna Hazare (right) and Arvind Kejriwal in August 2012. Hazare and Kejriwal were close allies for many years, with Kejriwal acting as the veteran social activist's closest aide. However, the two went separate ways in 2012 over Kejrival's announcement that he intended to go into politics

Analysts believe that Kejriwal is seen as a symbol of change in a country marred by dirty politics. Nandy explains that Kejriwal has launched an onslaught on the dealings that went by the name of politics in the country. "The popular belief is that he will make an honest effort to deliver significant portions of what he has promised, and this will make people happy."

Kejriwal has earned himself a reputation as a man who stands by his principles. He first rose to fame in 2012 when he and social activist Anna Hazare launched a campaign to force the government to introduce new anti-corruption laws. A short time later, Kejriwal set up the AAP to "cleanse" the system from within.

Although the AAP did not win a majority in the 2013 State elections, Kejriwal was appointed chief minister of Delhi. However, his term was short, lasting only 49 days. He resigned his post when his demands to appoint an anti-corruption ombudsman were rejected by the opposition. The move shocked his supporters, and critics dismissed him as immature.

Kejriwal later apologised for his resignation. This was a first for an Indian politician, and the move helped him win back his supporters. This time, his party fought the campaign on the motto "Paanch saal Kejriwal" (which means "five years Kejriwal").

Rahma Khan, a schoolteacher in Delhi, told Qantara.de: "Kejriwal's promises seem sincere, and I hope that he introduces measures to improve security for women in the capital, an issue where the BJP failed to do much." Khan insists that she does not want special treatment as a Muslim. "I don't want special treatment, but nor do I want my community to be degraded."

Home
Print
Newsletter
More on this topic
Apprehension and hope: Indian Muslims' attitudes to the election of Narendra Modi"The BJP has to give up its obsession with Muslims": Interview with the political theorist Rajeev BhargavaMuslims to play key role: Elections in IndiaDivisive figure could become India's next PM: Narendra Modi and the Indian Muslims
Related Topics
Democracy and civil society, Muslim minorities, Narendra Modi
All Topics

In India and beyond, there has been great sadness at the loss of the renowned Reuters photographer Danish Siddiqui, whose images captured the human face of South Asian news. He ... END_OF_DOCUMENT_TOKEN_TO_BE_REPLACED

Many marriages to British Asian men are accompanied by false promises of improved finances. Later when the men abandon their wives to return to the UK, some brides' families find ... END_OF_DOCUMENT_TOKEN_TO_BE_REPLACED

India is not alone in feeling great sadness today over the death of renowned Reuters photojournalist Danish Siddiqui. He was killed in Afghanistan during clashes between Afghan ... END_OF_DOCUMENT_TOKEN_TO_BE_REPLACED

India's prime minister has an "edifice complex" that has given rise to grand new government buildings, including a planned new parliament. Sadly, the spirit of deliberation and ... END_OF_DOCUMENT_TOKEN_TO_BE_REPLACED

Despite over a thousand years of co-existence, India's Hindus and Muslims often know little about each other's religious traditions. In an effort to promote understanding and ... END_OF_DOCUMENT_TOKEN_TO_BE_REPLACED

Over the years, the relationship between arch-rivals India and Pakistan has been shaped by conflict and confrontation. For some time now, however, both countries have been singing ... END_OF_DOCUMENT_TOKEN_TO_BE_REPLACED
Author:
Roma Rajpal Weiß
Date:
Mail:
Send via mail

END_OF_DOCUMENT_TOKEN_TO_BE_REPLACED
Social media
and networks
Subscribe to our
newsletter