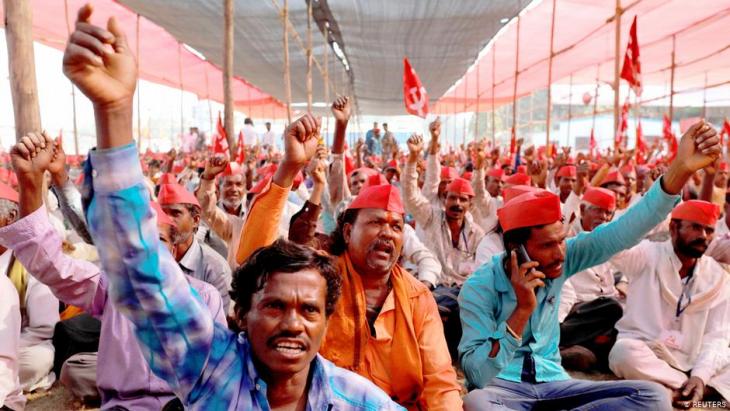 India's farmers vs. Narendra Modi
"Modi and the BJP are destroying the country"

In India, hundreds of thousands of farmers are fighting doggedly against laws passed by Narendra Modi’s government to liberalise agriculture. In a nationwide campaign, more than forty farmers’ organisations have called on Indian voters to deny the ruling BJP party their votes in future elections. Dominik Muller reports

The three laws on agrarian reform that were rushed through India’s lower and upper house during lockdown triggered first a wave of protests, and now this campaign. Modi’s Bharatiya Janata Party (BJP) insists that the laws are needed to modernise an outmoded system of agricultural production. But the farmers see the dismantling of regulations, price controls and the public purchasing and distribution system for basic foodstuffs as a threat to their livelihoods.

Since the end of November 2020, hundreds of thousands of farmers – mainly from Punjab, Haryana and the western state of Uttar Pradesh, have been camping on the outskirts of Delhi and blockading the main roads into the capital. They are demanding that the new agricultural laws are lifted. At present, the implementation of the controversial laws has only been temporarily suspended, following a verdict from India’s Supreme Court in January.

March saw the start of the "No vote to BJP" campaign. It was first introduced during the elections in the state of West Bengal, at the Press Club in Kolkata. "We have decided to visit the states where elections are taking place, and tell the farmers and the ordinary people that the policies of the Modi government are going to destroy this country," said Balbir Singh Rajewal from the Bhartiya Kisan Union, the largest farmers’ union in India.

"We are not here to support any political party. Our modest request is: vote for a party of your choice, but not the BJP; please teach the BJP a lesson." Rajewal also accuses the Modi government of taking inadequate measures to combat the coronavirus pandemic, and holds it responsible for the many deaths from COVID-19. 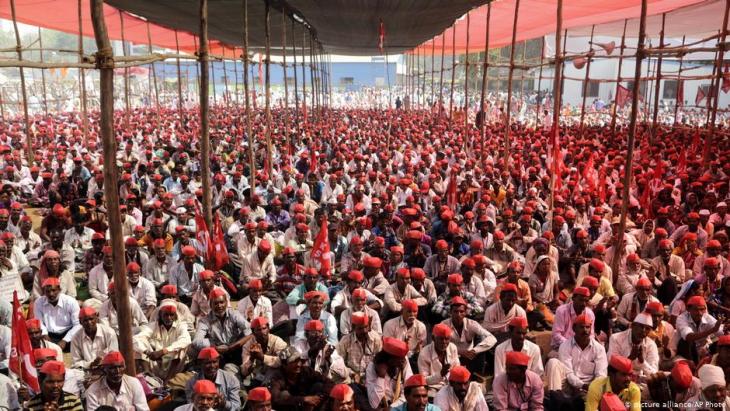 Demonstrating because their income is no longer enough to live on: hundreds of thousands of farmers are protesting in India against the Modi government's new laws to reform agriculture, which were whipped through India's lower and upper houses during the corona lockdown. Modi's Bharatiya Janata Party (BJP) insists the laws are necessary to modernise an outdated system of agricultural production. "Farmers, however, see the dismantling of regulations, price controls and the public purchase and distribution system of staple foods as a threat to their livelihoods," writes Dominik Muller

During the lockdown, of course, it has been impossible to mobilise the campaign in the way the farmers had imagined – in West Bengal there were fewer than ten public meetings, and the number of public appearances was similarly low in the states of Kerala and Tamil Nadu, where elections were also held this spring.

In West Bengal, the BJP even managed to increase the number of seats it holds in the state assembly from 3 to 77. But it was still defeated by the Trinamool Congress and the incumbent Chief Minister, Mamata Banerjee. In Kerala, the BJP lost its only seat, and in Tamil Nadu the opposition DMK alliance won a clear victory over the coalition of parties including the BJP, taking control of the state.

The next stage of the campaign: Uttar Pradesh

But now the campaign is moving up a gear. Elections are due to take place in Uttar Pradesh next spring. It’s the most important stage of this campaign before 2024: with 200 million inhabitants, India’s largest state is governed by Yogi Adityanath, a BJP hardliner who is tipped to be Modi’s successor. But the agricultural laws are at the centre of the campaign here, too, as is the sell-off of the public sector, the inadequate response to the coronavirus pandemic, and the poor state of the health system.

In May, the images of COVID-19 corpses floating in the Ganges in Uttar Pradesh were seen all around the world. Since then, the official number of infections may have decreased, but the figures are not regarded as particularly reliable: The Wire magazine has listed several cases in which the state’s government has significantly played these numbers down, especially those relating to deaths.

The same is true of the acute shortage of oxygen for seriously ill COVID patients: Adityanath didn’t just turn the people against him by flatly denying that there was any shortage. He even went so far as to threaten to arrest anyone who spoke about it under the National Security Act. "No one has died from a shortage of oxygen," he claimed in summary. He also refused to admit there were not enough hospital beds.

The state government’s approach to the new agricultural laws was also especially clumsy. In February this year, its minister Sanjeev Balyan visited a village in the western district of Shamli, where a large proportion of the population works in farming. The minister intended to "enlighten" the farmers there as to the advantages of the new laws. But the farmers protested against the visit, and ran the minister and his entourage out of town almost as soon as they arrived.

The BJP’s Sanjeev Balyan is also accused of having played an important role in the 2013 Muzaffarnagar riots. The unrest lasted for several weeks and left 62 people dead, including 20 Hindus. But it was Muslims who bore the brunt of the clashes, with more than 50,00 of them being driven out of the area. After this, Balyan’s popularity grew – but now it is waning, due to the farmers’ fury over the new laws. There has even been a reaction from the Jat community – high-caste, influential Hindus from the west of Uttar Pradesh – who were previously stalwart supporters of the BJP. According to The Wire, they are now predicted to vote for the opposition party, Rashtriya Lok Dal (RJD), because of the agricultural laws.

Hannan Mollah, secretary general of the All India Kisan Sabha (AIKS), another nationwide farmers’ organisation, has announced the extension of the "No vote to BJP" campaign to other Indian states that are due to hold elections in 2022: Uttarakhand, Punjab und Himachal Pradesh. But whether an India-wide coalition can be formed by 2024 to challenge Modi and his BJP in the elections to India’s lower house remains to be seen. Mamata Banerjee, the current chief minister of West Bengal, is being mooted by many in the Indian media as the potential architect of such an alliance.

Her nickname in India is "Didi", Bengali for "older sister": the 67-year-old politician Mamata Banerjee is the figurehead for the Trinamool Congress party, and a few weeks ago was voted in as chief minister of the Indian state of West Bengal for the third time in a row. On 2 May, her party won the regional elections in India’s third largest state with an absolute majority.

Mamata Banerjee, a member of the highest Hindu caste of Brahmins, is seen as fearless and not corrupt. She gained an international reputation in 2008, when she led protests against the appropriation of more than four square kilometres of farmland for a Tata corporation production facility, which was to manufacture the Nano – the world’s cheapest small car – in Singur, West Bengal.

The project met with huge resistance from farmers. Mamata Banerjee, who at the time was still the leader of the opposition in the state, started the "Save Farmland" movement. Banerjee even went on hunger strike for 25 days, which brought her a lot of attention from international human rights organisations. The protests were successful: although the Left Front government of the time in Kolkata combatted them very forcefully, the Nano factory was never built. Ratan Tata, the head of the mega corporation, announced at the end of 2008 that his Nano production facility would be relocated from West Bengal to Gujarat.

At the time, Gujarat’s chief minister was Narendra Modi, and he had offered generous conditions to Tata: free land and tax exemptions. As a result, the traditionally liberal Tatas then supported the Hindu nationalist Modi’s candidacy for the office of prime minister.

There are a few arguments in favour of Banerjee becoming a challenger to Modi: for one thing, there are no promising competitors for the role in India. And she has already succeeded in getting other parties who oppose the BJP round a table on numerous occasions. The Muslim minority in West Bengal – which makes up a quarter of the population – is largely well-disposed towards her, and Banerjee regularly appears alongside Muslim clerics at election campaign events.

But this might also count against her: the BJP has done a great deal to stoke hatred of Islam among the Hindu majority in India. Banerjee may be a big political fish in her home state – but other local politicians before her have failed when they have stood for the central government in New Delhi. And finally, there is also the difficult relationship with the proud Congress Party, which came out of the independence movement. It may now be in decline, but it is hardly likely to agree to a supporting role in any alliance of parties.

At the end of every year, the team at Qantara.de gives you a run-down of the ten most-read articles on the site over the past 12 months. Here is a quick overview of the stories ... END_OF_DOCUMENT_TOKEN_TO_BE_REPLACED

COP27 in Sharm el-Sheikh is turning into a PR disaster for Egypt’s military regime. Instead of praise for the host, the news is full of solidarity for imprisoned activist Alaa ... END_OF_DOCUMENT_TOKEN_TO_BE_REPLACED

India is projected to see an explosion in its urban population in the coming decades, but its cities already cannot cope and climate change will make living conditions harsher ... END_OF_DOCUMENT_TOKEN_TO_BE_REPLACED

Indian Americans from diverse faith backgrounds have peacefully co-existed stateside for several decades. But events in the U.S. – and violent confrontations between some Hindus ... END_OF_DOCUMENT_TOKEN_TO_BE_REPLACED
Author:
Dominik Müller
Date:
Mail:
Send via mail

END_OF_DOCUMENT_TOKEN_TO_BE_REPLACED
Social media
and networks
Subscribe to our
newsletter