"The Best Form of Lead Culture Is Called Democracy"

The Germans have many years of experience with integration that they could draw on – but it has vanished from their collective memory. This is one reason why German integration and immigration policy is driven more by fear and concerns about domestic security than by tolerance and respect. By Heribert Prantl

​​There was a time, a good 150 years ago, when the Germans – just like the Turks in today's Germany – were the new arrivals in the USA. At that time, New York was the city with the largest number of German speakers after Berlin and Vienna. The Germans kept themselves to themselves. They found it difficult to integrate. They stayed within their own neighbourhoods, built their own churches, appointed their own pastors, patronised German shops, socialised in German clubs, visited German theatres, wore German national dress, ate German food, drank German beer and enjoyed relaxing in beer gardens, even on Sundays.

Emigration has vanished from our collective memory

In Chicago in 1855, an ultra-conservative "Americans Only" party (an echo of the "Ausländer raus" [Foreigners Out!] slogans in modern Germany) successfully sowed the seeds of discord and their candidate, a Dr. Levi Boone, was elected mayor. He increased liquor licence fees by 600 per cent and banned the sale of alcohol on Sundays. On the first Sunday after the ban came into force, he sent police into the taverns to check that it was being observed. More than 200 German beer drinkers and barkeepers were arrested and jailed for breaching the ban.

This sparked a German uprising.

The archives call it the "Beer Riots", which were not as much fun as they sound: the police fired shots into the enraged mob, and the mob shot right back. The German immigrants learned their lesson: they started to take a more active role in politics as a way of defending their interests. Mayor Boone was voted out of office within a year and the ban was revoked. 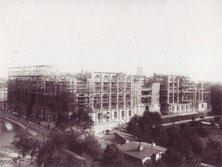 The Reichstag under construction, Berlin 1888: Germany's parliament building, the Berlin underground and the German rail network were built mainly by foreign labourers

​​These stories are largely unknown in Germany. There is no memory of them. Emigration does not feature in the Germans' collective memory and is not part of remembered national history. But if Germans were more aware of their own history of emigration, some of the problems associated with immigration and integration might not have been ignored for so long.

Had the Germans been mindful of their own migration history, they might not be so fearful of immigration. They might have faced up to reality, acknowledged Germany's status as an "immigration country" rather than wrangling over the meaning of the phrase for years, and they might have addressed the challenges that immigration brings with it. They might have been more relaxed and more sensitive to the demands of integration.

Immigration into Germany has been taking place for the last 120 years – and yet politicians still act as if they were the first to be confronted with it. The history of guest workers in Germany does not start in the late 1950s: it starts decades earlier. The Reichstag, the Berlin underground and the German rail network were built mainly by foreign labourers.

Due to the large numbers of Polish migrant workers at that time, "old Germans" ("Altdeutsche") warned about the "Polnisierung" – the spreading influence of Polish culture – in Germany. The tenor of these warnings was little different from the sounding of alarm bells nowadays over "Islamisation" in Germany. And yet the law-makers responsible for Germany's legislation on resident foreign nationals appear to have no memory of this past. 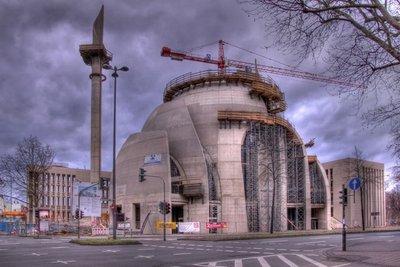 "In German integration and immigration policy, domestic security is the pivot around which almost everything else revolves. It is a policy in which immigrants are seen as disruptive," Prantl says. Pictured: The Cologne Central Mosque. When finished, it will be one of Europe's biggest mosques

​​In other areas, the law is continuously evolving. It builds on the past. It changes, it adapts, and it learns. Legislators make improvements to the law. Parliament, too, reacts to social change by bringing forward new legislation. As a consequence, there were major advances in criminal law and dramatic progress in the field of civil law, especially marital and family law, over the past century. When it comes to the legislation on resident foreign nationals, however, there has been very little progress.

The new Immigration and Integration Act of 2005 was, belatedly, the first small step. When it comes to the issue of immigration and the associated problems, politicians and legislators are always completely at a loss. But politicians with no memory make bad policy.

German politics' late entry into the integration and immigration society has therefore been a step into the unknown, with fear being one of the driving forces. This is still the case today. In German integration and immigration policy, domestic security is the pivot around which almost everything else revolves. It is a policy in which immigrants are seen as disruptive. It is a policy which increases the fear of multiculturalism rather than welcoming and capitalising on the added value that it creates.

A lead culture in the most positive sense

This trend has increased since 11 September 2001 and the subsequent attacks in Madrid and London. Since then, we have been quick to suspect Muslims of being dangerous Islamists. Islam is regarded as a culture that is incompatible with our own. The Koran is seen as a dangerous scripture, a handbook for terrorists. Here, those who invoke Allah as they plot and perpetrate terrorism have much to answer for. 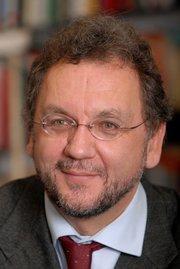 Leitkultur is rule of law and basic rights: Heribert Prantl, one of Germany's foremost journalists

​​Since 2001, something of the "certain anti-Koran rabidity" observed by Father Georges Anawati, one of the earliest advocates of reconciliation between Christians and Muslims, back in 1986 has become particularly virulent in Germany too. This became especially apparent in the debate sparked by Thilo Sarrazin in 2010. Sales of the book by this former SPD politician, which even casts doubt on Muslims' intellectual capacities, ran into millions.

One of the ideas which invariably still features in the German debate about integration is the concept of a Leitkultur – the prevailing culture that newcomers are supposed to adapt to. Of course, no one knows precisely what this entails. Is it food? Is it customs and lifestyle? What is Leitkultur? In my view, the best form of Leitkultur is one which promotes positive community relations. It's called democracy. It's called the rule of law. It's called basic rights.

It all sounds very simple, but we know from daily life that it's not as easy as it sounds. This form of Leitkultur makes many demands. It demands not only tolerance but also respect from all sides, from those who have always lived here and from the new arrivals. And it is this that will ultimately lead to integration.

It is better to talk of "respect" rather than "tolerance". Our Catholic citizens' attitude towards Protestants and vice versa is a model here: it is not just about tolerance, but about respect for each other's beliefs. That is genuine integration – and it is a task not only for Germany but for Europe as a whole.

Professor Heribert Prantl is a member of the editorial team and heads the Domestic Politics department at Süddeutsche Zeitung.

Interview with Friedrich Wilhelm Graf
"We Should Not Baptise the Basic Law"
In this interview with Johan Schloemann, Friedrich Wilhelm Graf, the Protestant theologian and one of the most eminent religious interpreters of our time, comments on the current debate about Muslims and the German system of values and explains why the neutral, liberal constitutional state must be defended so that it can recognise the differences between the religions

Debate on New Mosque Buildings
Too Weak to Bear outside Influence?
The frequent resistance against the construction of mosques in Germany derives from many sources: an instable German identity, cultural and religious insecurity, and fear of Islam, perceived as a threat. An essay by Salomon Korn