The Gardens of Others

The concept of "intercultural gardens" sounds auspicious: Fallow land is developed into community gardens where people from different cultural backgrounds can plant crops. However the example of the intercultural garden in Cologne, Germany, shows that integration work can also be counter-productive. Pouyeh Ansari reports 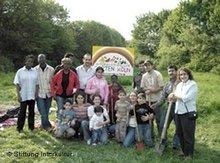 ​​ For the last three years a large piece of fallow land in Cologne-Niehl has been available to immigrants and Germans for ecological crop growing. Various herbs and vegetables are planted on small allotments.

The goal of the community gardens is not only the collective cultivation of fallow land, but much more a collective and social experience, which is supposed to facilitate Germans and immigrants coming closer together. Mutual garden parties and joint ventures not only improve the immigrants' German language skills but also allow Germans to become better acquainted with the various cultures and customs.

In the last ten years the number of these so-called community gardens has risen to about 100 Germany-wide. The first intercultural garden was founded in Göttingen in1996 by Bosnian refugee women together with other families of various backgrounds. Then in 2003 the Stiftung Interkultur was launched in Munich in order to support these intercultural garden projects, and to bolster communication between the gardens.

The intercultural garden in Cologne has existed since 2005. For three years everything worked extremely well in Cologne. "It was an ideal world," remembers Khosro Sarhang from Iran, who has been a member of the Intercultural Garden Cologne ever since the project started.

However the climate in recent months has changed so that now the integration project is hanging in the balance. Anton Auer, a member of the garden, even talks of a "counter-integration". What has happened?

In the last few months, out of the original idea of mutual acquaintanceship, support and exchange of knowledge, a downright conflict has formed on two fronts. On one side is the executive board of the society and the Cologne Agenda; on the other, some members of the intercultural garden – mainly immigrants.

But it is this very point that lies at the centre of the dispute: some members of the garden feel bullied by the Cologne Agenda, which, as a semi-municipal institution doesn't allow members the independence and autonomy they actually wish for.

Anton Auer was one of the first to openly address and criticise the grievances at the society meetings. "The Cologne Agenda only uses the garden to do PR for a showcase project with showcase migrants and to get sponsoring money for itself," says Auer, annoyed.

In the meantime the conflict has escalated so much that some members of the garden feel that they are being used by the Cologne Agenda.

The members say they want more direct responsibility. After all, it is meant to be about an integration project that not only involves getting to know the German language better but also familiarisation with German legal foundations and association rules.

Showcase projects with showcase immigrants is not what the project is about; promoting positions as these only creates greater rifts between Germans and immigrants. The idea behind the intercultural gardens is a splendid one – but it has to be implemented in the right way. A division of the two parties the way it exists at this time is indeed an example of "counter-integration".

Immigration and Germany
From Foreign Worker to Citizen
It all began with the Turkish-German recruitment agreement in 1961. The so-called "Gastarbeiter", the guest or foreign workers who came to work in Germany, were initially intended to do so only for a short time. But for many of the migrant workers it was all to turn out very differently. Vedat Acikgöz tells their story

EU Handbook on Integration
Grappling with the Complexities of Migrant Life
Integration is not a one-way street. Society must be prepared to accept immigrants, as well as support and encourage them. An outline of strategies can be found in the EU Commission's new "Handbook on Integration." Daniela Schröder reports from Brussels

Interview with Nikola Tietze
Franco-German Perspectives
The sociologist Nikola Tietze has been studying forms of Muslim identity in Germany and France. Susan Javad spoke to her about the different ways of approaching Islam in the two countries

END_OF_DOCUMENT_TOKEN_TO_BE_REPLACED
Social media
and networks
Subscribe to our
newsletter