Artists of various ethnicity are pooling their musical forces in some German cities, tapping into Germany's cultural diversity to produce world music. While integration has become an ongoing issue in current-day Germany, they're a significant stride ahead of society. Ayla Yildiz reports

With their mix of rock, pop and punk, Kent Coda have made their mark in the German – and steadily growing ethnic Turkish – indie rock community

​​ Orientation, Cazyapjazz: the names say reams about the bands, which have made it out of their niche and into the limelight. Their compositions reflect diverse cultural influences.

A look at the music and arts scene shows that musicians from the immigrant community for years have been teaming up with their German peers to cross musical borders, steeping songs from Turkey and folkloric echoes of the Mediterranean and the Middle East in a heady brew of modern Western elements.

9/8 time, unfamiliar to Western ears, brazenly fuses here with reggae and funk. In a word, they're finding common ground for seemingly incongruous styles of music.

Accents from Berlin and Munich

"We aim to show that Eastern and Western music are superbly suited for a symbiosis": the Berlin band 'Orientation'

​​ "We're Orientation, we make music and we're from Berlin." Band leader Andreas Advocado makes it clear where their base is. The city abounds with different niche scenes and an unmistakably diverse immigrant culture.

Advocado and singer/composer Bekir Karaoğlan met at a Turkish wedding in Kreuzberg. In 1997 they started up Orientation, bringing musicians from Iran and Azerbaijan into the band as well. They set their own Turkish songs, some with a touch of Arabesk (a Middle Eastern version of schmaltz), to jazz and funk.

"Mainly, we aim to show that Eastern and Western music are superbly suited for a symbiosis. With its endless variety of melodies and rhythms, the East makes up whatever harmonic edge the West may have thanks to its tempered tuning. If you combine the two, you get the most multi-faceted possibilities."

Advocado has no objection to calling Orientation's style "new Oriental soul" or "Arabesk soul". "We want our music to touch the hearts of people from all walks of life: young and old alike, regardless of colour, creed or origin. In this sense our music is, in the best sense of the word, popular music: pop." 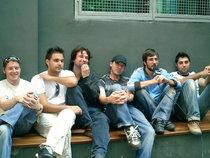 Matthias Kaiser, like a Romany virtuoso, mesmerizes crowds with his clarinet and suffuses the clubs with the special atmosphere of traditional Balkan sounds and dances.

Dawn by the Rhine

Kent Coda is a Turkish-Austrian-German trio from Cologne. The band members are Ögünç Kardelen, Christoph Guschlbauer and Timo Ehrler. But for their lyrics, the Turkish influence is hardly audible. With their mix of rock, pop and punk, Kent Coda have made their mark in the German – and steadily growing ethnic Turkish – indie rock community.

Songs about the yearnings and the trials and tribulations of a village in eastern Anatolia: the Dusseldorf-based band 'Tan'

​​ Tan (Turkish for 'dawn') from Düsseldorf go for a softer sound. On the CD Yar diye diye – Longing for you, they harmonize jazz with titles like Beri gel, about the yearnings and the trials and tribulations of a village in eastern Anatolia; or Ben yana, a poem by 16th-century Turkish-Alevi poet Pir Sultan Abdal, which is known in our day as a mystical song.

The band provide virtuosic accompaniment on saxophone, double-bass, electric piano, darbukah (goblet drum) and oud (short-necked lute). The upshot is an ethnic jazz take on legendary folksongs. Songs have got to come from the whole heart, sings Ergün Aktoprak.

Their German origins notwithstanding, Jürgen Dahmen and Reiner Witzel pass muster here – and with flying colours: a case of cultural assimilation – in reverse.

"We see our music as a means of communication as well," says Ergün Aktoprak. "Just as sophisticated poetry isn't translated word for word, but by a free rendering, we want to do a 'free rendering' of Turkish or Anatolian music and put it across in a modern version so it'll be perceived and understood at a certain cultural level, beyond bellydancing clichés, corresponding to our concept and the discriminating tastes of our target audience."

Music for a cosmopolitan community

What began as an experiment now commands respect in a globalized world. Far from the beaten track of mainstream culture, these artists make ethnic music professionally. With three albums of their own and plenty of contributions to others' compilations and soundtracks, Orientation epitomize the multicultural melting pot of the nation's capital.

Cazyapjazz play major festivals between Bavaria and the Bosporus. Two members of the band, Kaiser&Semih, are popular mainstays of the Munich and Istanbul jazz scene.

Tan also do live DJ sets. Their mix of "Hudey", a folk song that for centuries has been accompanied only by a saz (a long-necked lute), with turntable scratching exceeds all expectations. Indeed, all these bands are out to reach a cosmopolitan crowd of receptive listeners who are curious about what German and Turkish musicians can express together.

Music without preconceptions. "We don't take on current-day issues," says Advocado. "Our language is music, our lyrics are about love, family, loneliness."

Ergün Aktoprak and Jürgen Dahmen are also involved in the project Jazzpool NRW, which brings together the best improvisational musicians in North Rhine-Westphalia, with the band Yan Yana (Turkish for "side by side").

Immigrant art can build bridges of mutual understanding, and when Germans get involved that opens up further horizons. The concept of integration is variously construed, but if it is understood as a process in which everyone's on the move together, these intercultural music projects are on the right track.

Ayla Yildiz is a freelance journalist and online editor specializing in Istanbul lifestyle and culture.

The Palestinian Musician Marwan Abado
Life in Exquisite Exile
Marwan Abado was forced to leave his native city of Beirut as a result of the country's civil war. His life path shows that exile does not necessarily mean leading the life of an outsider. Suleman Taufiq met the cheerful oud player in his adopted city of Vienna

Ensemble Sarband
"Mozart Is No Better Than Dede Efendi"
Sarband endeavours to show connections between European, Islamic and Jewish music-culture. "Dream of the Orient" is the name of the ensemble's musical program that demonstrates Turkish influences on 18th century European music. Susanne Güsten reports

END_OF_DOCUMENT_TOKEN_TO_BE_REPLACED
Social media
and networks
Subscribe to our
newsletter