''You Can Play Football Wearing a Headscarf If Necessary''

They still encounter rejection and prejudice now and then, but their enthusiasm for sport knows no bounds. Eighteen female soccer players from six different countries train for the Turkish club "Al Dersim Spor". By Ariana Mirza

​​After the final whistle, the opponent has a slip of the tongue: "You're actually pretty nice." This strange sentence is often heard whenever the young soccer players of "Al Dersim Spor" play against a purely German team for the first time. "A lot of them immediately associate us with foreign crime gangs or fundamentalists, because we're a Turkish club from Kreuzberg."

Twenty-six-year-old Safije is familiar with the prejudices. She grew up in this Berlin neighbourhood, home to many immigrants from Muslim countries.

Fighting the brothers for the ball

When she was just a little girl, Safije was already fighting her four brothers for the ball. Her early passion for this "boy's game" was accepted without any problem by her family. Today, the 26-year-old is the assistant coach to her teammate Mehtap. The 34-year-old Mehtap used to play for the Turkish national team and this season became the coach of the diverse selection of ladies on "Al Dersim Spor."

Greeks, Turks, Germans, a Palestinian, a Pole and a South Korean, all between the ages of 17 and 34, make up the squad. "What connects us is a mutual love of football.” But the international make-up of the team is not the only thing that's unusual. The coaching methods don't much resemble the common perception of drills and discipline.

"We only praise one another. We don't think much of complaining." It's a simple philosophy which has helped the newly-formed team to 18 victories in 20 matches so far.

Football much more important than flirting

Paros, the club's 26-year-old goalkeeper, was already Safije's most talented training partner during grammar school. Her parents, who hailed from Greece, never had any objections to their daughter's hobby. The fact that Paros comes from a Greek Orthodox family and Satije is a Muslim has never been an obstacle to playing together. "I believe we are all religious in our own way. But nobody is trying to convert anyone else."

But the women of Al Dersim Spor say their soccer careers weren't always completely free of problems. "When we were younger we played for another Turkish club. The coaches always had to pay attention to make sure we didn't sneak off to meet boys." There was no cause for worry, since usually, the sport is much more important to the young immigrants than flirting.

Perfect make-up on the pitch

All the women agree: They can't imagine a life without football. But the rough sport doesn't at all mean they want to give up their femininity. The 27-year-old Greek player Vicky, for example, can sometimes be seen on the field with perfect make-up. The usual clichés associated with ladies' football don't apply to this team. It goes practically without saying that most of the women of "Al Dersim Spor" have long hair. 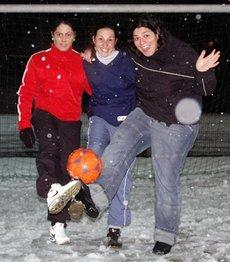 Bend it like Safije, Vicky and Paros - the three Berlin girls are having a ball

​​But sometimes just choosing to play this "masculine" sport can lead to conflicts. One player lost her boyfriend because she didn't want to give up soccer. "This happened although he played the game himself and we'd met on the field." Some of the players' brothers would rather see them choose a sport where they would be "showing off so much bare leg."

And some parents urge their daughters to at least stop with the "unfeminine" kicking once they've been married. A young Turkish man named Sinan doesn't agree with this opinion. He's the husband of the 24-year-old player Hülja and never misses one of his wife's games.

The supporters of Dersim Spor still form just a small group, but they are loud and enthusiastic. "When the weather is bad, only the diehards show up. But when it's sunny or we play indoors, we can draw as many as 100 fans."

The numerous relatives of Valerie and Marlene are always part of the crowd. These 24-year-old twin sisters are amongst the club's German players. It took years for the first German girls to join mixed teams, reports Paros. But her sister Stavi says it's a lot more common today. "Fortunately, the prejudices are starting to fade on all sides."

Thanks to the efforts of Marlene and Valerie, the ladies of Dersim Spor will even be present at next year's Football World Cup. They created the short film "Way to go" in connection with this year's "Berlinale Talent Campus". This cinematic plea for ladies' soccer impressed the international jury and will thus the film will be shown as part of the program accompanying the World Cup 2006.

The cast of "Way to go" are the players of Dersim Spor. In the amusing and rapidly edited clip, the young ladies prove that football can be played in a skirt. Neither dexterity with the ball nor stamina is determined by sex or cultural identity.

Vicky, whose parents would have preferred her to be a ballet dancer, gives one obvious example: "On one of our past teams, we had a Muslim player who would only take the field wearing a headscarf and long trousers." It did not affect the quality of her play.

Soccer in Afghanistan
Goals and Glory Among the Rubble
German soccer coach Holger Obermann has been sporting ambassador to Afghanistan since 2003, his latest Third World soccer project. IRatbil Ahang Schamel and Simon Schneider portray the man and his work in Afghanistan

Soccer Star Abbas Suan
No Arabs, No Goals – Soccer in Israel as a Metaphor
Although the Israeli Arab soccer player Suan is adored as a national hero from Haifa to Tel Aviv, tolerance displayed towards Israel's Arab citizens remains minimal. By Moshe Zimmermann

Initiative
Pedalling for Peace
In order to raise awareness of how the current situation within the Middle East affects the lives of women and children, over 200 women from 23 countries cycled through Lebanon, Syria and Jordan. Sophie Nicholson was with them.

END_OF_DOCUMENT_TOKEN_TO_BE_REPLACED
Social media
and networks
Subscribe to our
newsletter