The International Photography Gathering in Aleppo, Syria is featuring an exhibition called "Encounters with the Middle East". Gabriela M. Keller has been taking a look at how the international artists have approached the Orient - and why the curator of the exhibition has incurred the displeasure of the Syrian regime

In this picture by Vance Jacobs a little girl in a bizarre outfit of frills and flounces poses for a children's beauty contest, her face as over-made-up as a corpse

​​She looks composed, almost spellbound. The young woman in the grey sari stands in the middle of Mumbai station. Normality, so fragile yet so easily taken for granted, rages about her. Passers-by rush past in such haste that their outlines blur to a streak. Her motionless pose is almost a challenge, the seriousness of her gaze almost a provocation.

It is three years since the bombs in this station ripped everyday life to shreds. The photographer Johannes Hepp went there in 2005 to investigate the changes the attacks have forced upon the place they targeted.

His photographs are currently on display at the ninth International Photography Gathering in Aleppo. Issa Touma, curator and owner of Le Pont Gallery, has brought together the works of 70 artists from 27 countries in Syria's second-largest city.

For the series "The Days After", Hepp takes photographs of the sites of terrorist attacks. In the process, the cunning way he plays with the documentary technique of objectivity is exposed as pure illusion. The picture of that steel and concrete temple of the long-distance traveller is stretched right out widthways.

And there they are again: the deep-set eyes, the serious face – the observer encounters the young woman a second time in the same photograph. "The photos are montages," explains the Munich photographer. On second glance, fractures appear in the reality they portray. "I want to make people stop and think about how photographs are misused as pieces of evidence," he says.

Control over all cultural initiatives

Issa Touma, the curator, had planned to exhibit these photographs – more than 1,000 of them – in Aleppo's old electricity plant. Then, two weeks ago, the provincial government in Aleppo unexpectedly refused to give him a permit. Touma was left without an exhibition space. 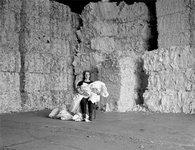 ​​"The government wants cultural events only to take place in the European centres, the Goethe Institute or the Institut Français," he says. "That way they can control everything." He is silent for a moment, then adds: "Independent people are not supposed to have a life."

Touma has been working on an international level for ten years. He has connections with artists all over the world. The government has repeatedly indicated to him that in this he is overstepping the boundaries of what is allowed. On one occasion his gallery was closed for several months. "I won't work with them, and they know that," he says, and shrugs wearily.

However, after this latest incident he refused to be discouraged. Instead, he is now showing the photographs in rotation in his own little gallery. Instead of the eleven days originally planned he wants to extend the exhibition to several months, so that gradually every photograph will be shown.

The subject "Encounter with the Middle East" is more of an explanatory title for the observer than a guideline for the photographers.

The mourning mother as a universal motif

Other artists, such as Rini Hurkmans, are working at such an abstract level that the dimensions of the Middle East take shape only in the convolutions of the observer's brain.

The Dutch photographer's self-portraits make reference to international conflicts. In all of them she is seated on a gallery holding a human-shaped object in her arms. It is the pose of the pietà, she explains, the image of Mother Mary holding her dead son.

In one picture she is sitting in Manhattan holding an innocent white doll. Silent mourning, senseless loss, and a New York continuing with everyday life regardless: no direct reference is made to 9/11, but the associations overshadow this photograph all the same.

None of the artists indulge in contemplative '1001 Nights' sentimentality, not even in the photographs taken in the Orient itself. The Syrian photographer Pedros Temizian, for example, portrays a dismal big cityscape, a Syria of bare, functional buildings and urban decay, full of stained concrete mountains in which human beings presumably reside, though the observer is no longer sure.

The exhibition thus enables an encounter to take place in the best possible sense: one in which both sides remain independent, but also through comparison open up a new perspective – both on the 'other' and on themselves.

In one picture by the American Vance Jacobs a little girl in a bizarre outfit of frills and flounces poses for a children's beauty contest, her face as over-made-up as a corpse.

Photos by Rania Matar from Lebanon show another child, not much older than the first, putting on the hijab with careful devotion. It is up to the observer to decide which society makes it easier for young girls to settle in to society. In any case, the security of conventional clichés begins to falter.

Open-minded tradition of Islam in the 'rogue state'

Around 40 photographers came to the opening of the exhibition. On the second evening they were invited to visit the Syrian Grand Mufti Ahmed Hassoun. "You bring messages from one place to another; sometimes they are messages of beauty and happiness, sometimes of sorrow and repression," said Hassoun.

He went on to speak of tolerance, and expressed the opinion that Christianity, Judaism and Islam were all equally valuable paths to God. His guests were clearly very impressed by the open-minded tradition of Islam in the 'rogue state' of Syria.

"At festivals like this you normally spend the evenings talking about work," said Alexandra Vogt from Munich. "Here all we're talking about is the country." Syria, isolated on the 'axis of evil' and a virtual no-go area for tourists, has made contact with the rest of the world through art.

"You are the messengers of the eye. Your pictures go out across the world," said the Grand Mufti. The Syrian regime's compulsion to control everything almost suppressed the exchange of messages. Thanks to the intrepid nature of a single Aleppo gallery owner, it did not succeed.

A German Brass Band in the Middle East
Touring the Orient with a Trumpet and a Notepad
When Udo Moll toured the Middle East with the Schäl Sick Brass Band, he met with Mohammed Mounir, he encountered a young and kind man called "Jihad", and an image of Khomeini resembling Sean Connery, all of which he noted down in his diary...

END_OF_DOCUMENT_TOKEN_TO_BE_REPLACED
Social media
and networks
Subscribe to our
newsletter