The Catholic priest Father Franz Magnis-Suseno has lived for more than 40 years in Indonesia. Almost 30 years ago, he became a citizen of Indonesia, where he has since earned a reputation as a champion of interreligious dialogue. Christina Schott reports 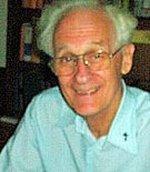 ​​He is one of the most well-known intellectuals in Indonesia, as well as being a recipient of the Order of Merit of the Federal Republic of Germany. He is regarded as one of the most important figures engaged in interreligious dialogue in Indonesia, a country characterized by hundreds of different cultures, languages, and traditions of belief.

Father Franz Magnis-Suseno, trained at a Jesuit College in the Black Forest, found his true calling in a country with the largest Muslim population in the world.

Contrary to all appearances, the tall European with radiant white hair holds an Indonesian passport. Twenty-eight years ago, the Catholic priest, born in Silesia in 1936 as Franz Graf von Magnis, took up Indonesian citizenship. As an overt sign of allegiance, he attached the Javanese surname Suseno to his name.

An important figure in the dialogue between religions

"I had the feeling that I found the right place here. This is why I also wanted to be identified with the country where I live," explained Magnis-Suseno. "Of course, in terms of culture and up-bringing, I am German. Indonesians themselves don't expect me be more Indonesian than an Indonesian. Yet, after more than 40 years here, my likes and dislikes are naturally more in tune with those of my adopted country. I don't feel German anymore."

The long-serving director of the Driyarkara School of Philosophy in Jakarta is extremely visible in the Indonesian media. He has taken part in so many events and government commissions that even the custom officers greet him when he arrives at the airport in Jakarta. His Javanese accent also helps him to be accepted, and many Indonesians regard the priest as an indispensable figure, particularly in the dialogue between religions.

"Every religion is essentially humanistic in its roots. I therefore see it as my task to promote social awareness. The most important thing is for people to establish contact and get to know each other. Knowledge is the only way to eliminate fear and mistrust," said Magnis-Suseno, who himself has many Muslim friends. The case of Aceh is a good example. "I believe that the many positive encounters with foreign aid workers will result in the Acehnese being more open."

Franz Magnis was already a member of the Jesuit Order when he came to Indonesia in 1966. He had been encouraged to make the trip by letters received from brothers in his order stationed in Java. Once in the old Sultan city of Yogyakatra, he began learning Javanese and then the national language of Bahasa Indonesia. He later studied theology, philosophy, and politics.

"My belief provided the initial motivation. I thought I could be more useful to the Church in Indonesia than as a priest in Germany. Later, however, other issues grew in importance, and since then I have been deeply involved in discussions with Muslims. This developed quite easily," related the professor.

Debate on Marxism and communism

In light of the political situation under the regime of General Suharto, who had hundreds of thousands of communists killed or thrown into prison without trial, the Jesuit decided to specialize in issues relating to Marxism and communism during his studies. Later, he was often called upon as an expert, for example, during the judicial process against members of the Democratic People's Party in the mid-1990s. Magnis-Suseno's task was to prove that the accused were neither communists nor acted in opposition to the Pancasila – the Indonesian state ideology.

A hopeless undertaking. A number of people misunderstood this commitment and took the priest for a communist as well. In 2001, an "anti-communist alliance" stormed Jakarta's bookstores, burning a number of Magnis' books in the process. "They didn't even know what the books were about," claimed the defamed priest. "One month later, I contacted these very same people and we met for a discussion lasting an hour and a half. The meeting ended with embraces and I gave them a signed copy of my book."

In the eyes of the former university director, who still advises doctoral students at Driyarkara, the main reason for the increase in radical movements is the lack of moral values among young people. At the same time, the priest clearly differentiates between religious and political Islam.

"It is true that this generation of young Muslims pursues religious duties with a greater intensity. However, this trend has yet to prove victorious in the political sphere. During last year's elections, Islamic parties received around 40 percent of the vote, but the nationalists won."

Father Magnis-Suseno is counting on the moderate views of Muslim mass organizations, such as the Nahdlatul Ulama (NU) and the Muhammadiyah, to prevail over the radical splinter groups in Indonesia. At the same time, he appeals to those in the West to help in stabilizing the young democracy.

"I find it very important that a sense of a balance should exist in the West. People have to understand that Islam can't just be equated with terrorism. We have a Muslim terrorist group in Indonesia, but it is not representative, despite the terrible attacks it has conducted. The Bali bombing, in particular, caused great dismay among moderate Muslims. And they continue to form the largest constituency of Islam in Indonesia."

Translation from German by John Bergeron

Bali Breaks Visitor Records
All Quiet in Paradise?
Today, 12 October 2004, is the second anniversary of the dreadful terrorist attacks on the holiday island of Bali. On this day two years ago, 202 people lost their lives in a car bomb attack on the Sari Club in the tourist resort of Kuta. Alexander Kesper reports

Indonesia
The Koran's Spirit of Gender Equality
Lily Zakiyah Munir, Head of the “Center for Pesantren and Democracy Studies”, Indonesia, argues that it is not the Koran, but social convention of patriarchal cultures that women in Islamic countries are deprived of equal social status.

END_OF_DOCUMENT_TOKEN_TO_BE_REPLACED
Social media
and networks
Subscribe to our
newsletter