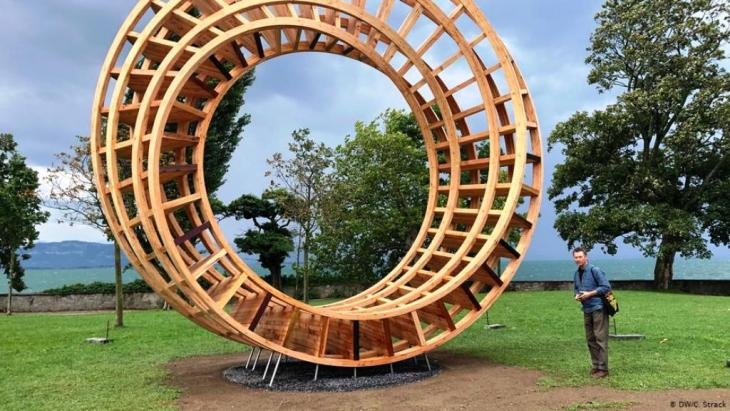 The Religions for Peace 10th World Assembly is the biggest meeting of religions taking place this year. Representatives of religious communities from 100 countries are currently meeting in the German town of Lindau at Lake Constance. The symbolism is huge. But the expectations are possibly even greater. By Christoph Strack

You can't miss it. The striking wooden sculpture is seven and a half metres high. The ring-shaped structure spirals in on itself. It has no beginning and no end; no outside and no inside. This "Ring for Peace" was erected a few days ago in Luitpold Park in the picturesque town of Lindau on the shores of Lake Constance.

"It represents the idea, the vision and the mission of Religions for Peace," says Ulrich Schneider. As managing director of the Foundation Peace Dialogue of the World Religions and Civil Society, 46-year-old Schneider is responsible for the organisation of the 10th World Assembly of Religions for Peace, which was opened by German President Frank-Walter Steinmeier this Tuesday. 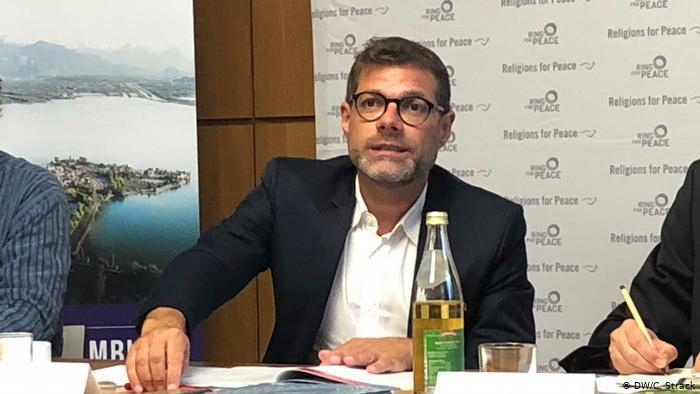 Ulrich Schneider, managing director of the Foundation Peace Dialogue of the World Religions and Civil Society, is responsible for the organisation of the 10th World Assembly of Religions for Peace, which is currently taking place in Lindau, Germany

Religious leaders meet in the heart of Europe

Religions for Peace is a global network of religious communities. According to Schneider, every religion in the world has in some form or other joined the coalition, which was founded in 1970.

Some who are familiar with the Religions for Peace World Assemblies, which take place once every five years, compare the event to the UN General Assembly. Now, members of this major civil society alliance have made the long journey from all four corners of the globe to a small town in Germany that is far from the corridors of power and not all that easy to reach. Small it may be, but Lindau lies at the heart of Europe. For many years it has played host to the international Lindau Nobel Laureate Meetings, demonstrating that it is the ideal place for intensive reflection and international exchange.

Economist Wolfgang Schürer was involved in the Lindau Nobel Laureate Meetings over the course of many years. Now the chairman of the Foundation Peace Dialogue of the World Religions and Civil Society, he is the motor driving the Religions for Peace 10th World Assembly. "We hope that with this World Assembly, we can provide some impetus that will have a sustainable impact and that we are not just another so-called summit, of which there are so many in the world today," he said. 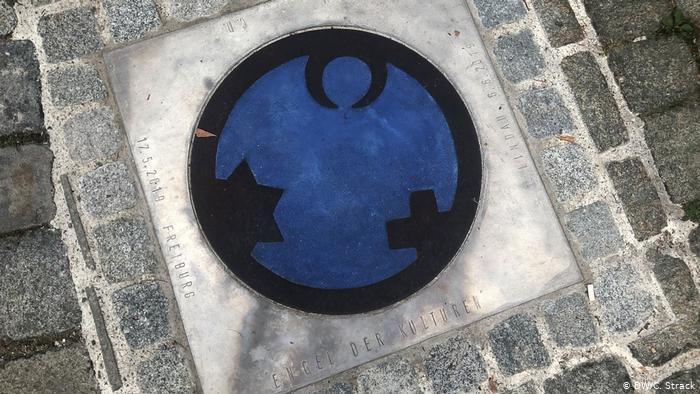 The "Angel of Culture" symbol integrated into a path in Lindau. The "Angel of Culture" is an art project, initiated by the two German artists Carmen Dietrich und Gregor Merten, which strives to unite citizens of the three Abrahamic faiths: Judaism, Christianity and Islam. Its aim is to establish a symbol for peace and harmony between these religions and cultures, in combination with active civic involvement

This chimes with the hopes or expectations of politicians, not least with the German Foreign Office in Berlin, which is supporting the Lindau event to the tune of several million euros. In some parts of the world, political institutions have for years been incapable of taking action, leaving civil society players (many of which are religious) to help the needy. This is the case in villages in the Central African Republic, for example, in parts of Iraq and in a number of different countries. "Religious communities are the biggest civil society institutions in the world," says Andreas Görgen, adding: "beyond questions of faith, we are interested in their responsibility within and between societies."

Görgen is head of the Culture and Communication Department at the German Foreign Office. Since 2018, his department has included a unit devoted to Religion and Foreign Policy. In Lindau, Görgen and his team will be meeting fellow diplomats from numerous European countries who will be there as observers. This is not surprising given that all over the world – whether in Europe, Asia, or the US – politicians are focusing more on the role of religions and reminding them of their responsibility for peace.

This means that politicians see the potential of religious communities, but also want to remind them of their duty as forces for peace. Delegates in Lindau will certainly not be shying away from thorny issues. For example, delegates from North and South Korea, Myanmar and Bangladesh, and Sudan and South Sudan will be talking to each other behind closed doors. 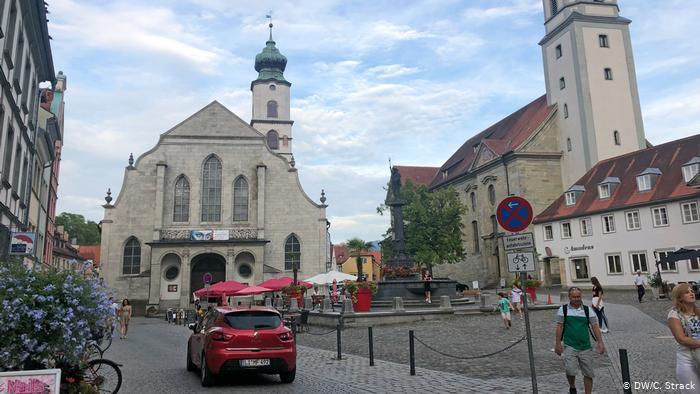 There will be more than a few well-known figures in Lindau. To name but a few: José Ramos-Horta, an important politician in his native East-Timor and winner of the Nobel Peace Prize, will attend. So will Layla Alkahafaji, an Iraqi Muslim who spent ten years in prison under Saddam Hussein, before emigrating to Canada and returning to her native country, where she is now one of the leading voices in the fight to combat violence against women. Then there is Cardinal John Onaiyekan of Nigeria, one of the people working for the peaceful co-existence of religions in Nigeria despite the terror being meted out by the Islamist Boko Haram movement.

In total, some 900 representatives of religions from 100 countries will attend this year's conference from 20–23 August. According to Ulrich Schneider, managing director of the foundation, the organisers did not meet their original target of women accounting for one third of all delegates. Schneider also emphasises the significance of religion all over the world. Over 80 per cent of people around the world describe themselves as religious. "That is undoubtedly very different from the situation here in Germany. And it illustrates what an important role religion plays today."

The diversity of countries and religions represented in Lindau will leave its mark on the town.

For their part, the Catholic and Protestant churches in the town – which are actually next door neighbours on the island – will invite religious representatives and the local population to a dinner on the Marketplace, where everyone will eat together at a large table. The ring will also remain as a lasting, durable memento of the event.

The Germans hope that Lindau and the atmosphere there will help encounters and conversations to flourish. The aim is not just to arrive at a joint final declaration, but also to pass concrete resolutions. There are plans for a global initiative to protect religious sites and a joint scientific effort to improve the solving of sexual crimes against women during armed conflicts.

"Our hope," says Schneider, "is that Lindau will become a permanent place of interreligious dialogue and impetus for peace." If so, the representatives of the world's religions could be back on the shores of Lake Constance again in five years time.

Nine victims of the right-wing extremist murderer of Hanau had a migration background. The motive for the crime is clear and unambiguous: racism. Sheila Mysorekar from the "Neue ... END_OF_DOCUMENT_TOKEN_TO_BE_REPLACED

The template of the mentally disturbed gunman doesn't fit. Seeing himself as a spearhead, heralding a new rise to power, the murderer of Hanau placed himself squarely in the Nazi ... END_OF_DOCUMENT_TOKEN_TO_BE_REPLACED

A newly leaked document confirms how China is imprisoning Muslim minority Uighurs based solely on their religion. Naomi Conrad met with a whistle-blower and visited relatives of ... END_OF_DOCUMENT_TOKEN_TO_BE_REPLACED

Education is the key to the future. Muzoon Almellehan has known this since she was 14 years old. But she lives in a Jordanian refugee camp. And since then she has been fighting ... END_OF_DOCUMENT_TOKEN_TO_BE_REPLACED

Michael Frey has written a fascinating book about the contemporary political thinker Nassif Nassar. Since 1967, Nassar has devoted his life’s work to the question of a fair social ... END_OF_DOCUMENT_TOKEN_TO_BE_REPLACED

The Kurdish YPG militia did the heavy lifting in the fight against the "Islamic State", yet many foreign YPG adherents, including Germans, have come home to find themselves under ... END_OF_DOCUMENT_TOKEN_TO_BE_REPLACED
Author:
Christoph Strack
Date:
Mail:
Send via mail

END_OF_DOCUMENT_TOKEN_TO_BE_REPLACED
Social media
and networks
Subscribe to our
newsletter