Equality as an Educational Mission

"Rahima" is a Muslim NGO in Indonesia which advocates the equality of women based on modern and democratic ideas. Arian Fariborz spoke with its new director, Aditiana Dewi Erdani 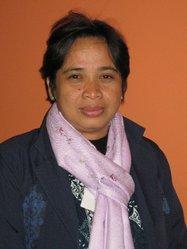 ​​What are the main focuses and goals of "Rahima"?

Aditiana Dewi Erdani: One of our most important tasks consists of developing networks with Islamic boarding schools ("pesantren") and public Islamic institutions where we can implement our ideas of democracy and equality. This is important since these religious institutions have a significant influence on the Islamic discourse in the public sphere. In this way, we can bring Muslims in Indonesia closer to our moderate, democratic ideas about equality.

But not every one of these "pesantren" accept our "mission" and want to cooperate with us – above all schools which adhere to patriarchal traditions. For this reason we only work together with school directors ("Qiay") that have more progressive ideas.

Our strategy is to establish contact with these school directors and when a door is opened to us, we undertake certain educational activities within the "pesantren." Thus, we conduct, for instance, training courses for teachers and other leaders in the field of education to sensitize them to "gender" issues. The goal is that they will appropriate our material and then later step forward themselves as facilitators by passing this material to their students in the "pesantren" – to boys as well as girls.

What is your understanding of a liberal, progressive Islam for Indonesia?

Dewi Erdani: In connection with Sharia "Rahima" is trying to improve and strengthen women's access to education and political participation in altogether four regions in West Java. We believe that women must be self-empowered and active, since women in particular are targeted by Sharia. They live at home because they are not allowed to fully participate in public life.

Of course, Sharia is a part of the Islamic self-image, but we reject the male patriarchal interpretation. "Rahima" is therefore opposed to patriarchal discourse, and this is the reason why we reject Sharia laws in Indonesia – because they do not represent the real Islamic Sharia, but only a politically instrumentalized Sharia.

As a result of growing pressure from ultraconservative Islamists, parts of Sharia have already been implemented in 16 of the 32 provinces of Indonesia.. In Aceh or in the city of Tangerang, west of Jakarta, Islamicization is on the advance.

Do you believe that this phenomenon is in part being carried "from the outside" into Indonesian society, for example through Wahhabi Islam from Saudi Arabia?

Dewi Erdani: Well, I think many factors are playing a role here. The crux is probably that Indonesian society is currently undergoing a multilateral crisis – in economic, political, and a religious sense. This, in essence, is the reason why so many are thinking about their religious beliefs. And this is how Wahhabi beliefs have also become increasingly accepted.

But the fundamentalists are meeting with such resonance not only because of their ideas and practices, but because they have undertaken much that the communities were sorely lacking. They offered economic assistance and medical care for free. And I think that these methods would also reach many other societies that are in a multilateral crisis.

Born in 1967 in Jakarta, Indonesia, Aditiana Dewi Erdani studied law at the Law Faculty of Diponegoro University in Semarang, from which she graduated in 1991. Until 2001, she worked for the Indonesian Society for Pesantren and Community Development, and moved on to working for "Rahima," becoming the Director of the Executive Body in 2007.