Lebanese writer Alawiyya Sobh is one of Arab literature's self-confident voices. She is a writer who mercilessly dissects patriarchal Arab society, exposing the oppression of women, who are always at the centre of her novels. Mona Naggar talked to the author about her most famous novel to date, Maryam of the Stories

Lebanese writer Alawiyya Sobh is one of Arab literature's self-confident voices. She is a writer who mercilessly dissects patriarchal Arab society, exposing the oppression of women, who are always at the centre of her novels. Mona Naggar talked to the author about her most famous novel to date, Maryam of the Stories 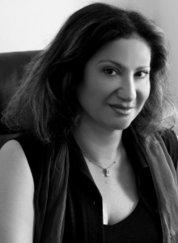 Alawiyya Sobh: "Despite the surface modernity one sees here in Lebanon and elsewhere in the Arab world, we are actually witnessing a religious backlash."

​​ "Maryam of the Stories" is very much about the memory of women. Maryam, who takes on the role of a chronicler, tells stories about herself, about her own generation, as well as about her mother's and her grandmother's generations. The younger women are clearly fighting for emancipation and apparently also pushing for greater freedom for themselves. But there comes a point in their lives where this breaks down. They conform, enter into traditional relationships. What goes wrong?

Alawiya Sobh: My book is about the defeat suffered by the women in the Lebanese civil war. Maryam, the first-person narrator, dreams of love and of free relationships. But her dreams are at odds with the traditional mindset of the men, with their lies and hypocrisy. They act as if they were modern and enlightened, looking for a relationship of equality with the women. That, however, is not the case. Maryam, thus, comes to a decision, one that a few years earlier, she would not have made – to marry a man she does not love. Her friend Ibtisam goes through a similar experience.

I let the women talk about their relationships to men, about the oppression they experience, about the shock of the civil war and the impossibility of making peace with this society. I follow very closely the changes that the war has brought to Lebanese society.

The civil war has left the society deeply divided, both religiously and politically. Despite the surface modernity one sees here in Lebanon and elsewhere in the Arab world, we are actually witnessing a religious backlash. At one time we had a project of modernity, but our society has regressed – and it is the women who are paying the price. This is my point of view in the novel, at least as far as the generation I focus on is concerned.

The more Maryam progresses in her chronicle, the greater the similarities are that arise between the stories of the women in her family, her own stories and those of her friends. To what extent do the destinies of the female characters in the book repeat themselves?

Sobh: The women's failures are repeated, but in different forms. Maryam, Ibtisam and Yasmine have dreamt of change and have been disappointed. Though their sense of disappointment is greater than that of earlier generations their lives go in a similar direction, because the reality has not changed. The laws discriminate against women and fundamentalism is flourishing. I try to reflect all of that, with all of the violence inherent in the reality, but also with a certain irony. In my novel there are passages to make you cry, but then you have to laugh again. Bitter irony is very important to me.

​​The story of Maryam's mother is like a novel within the novel. She is the link between the patriarchal village society and the life in Beirut, where the family later moves. How important to you is this mother-figure?

Sobh: I think the image of the mother in Arab novels is one that is loaded with stereotypes. Mothers are weak, long-suffering, obedient and silent. I have freed myself from this image, given Maryam's mother a voice, and made her a multifaceted character. She tries to take revenge against her husband, angers her family. She tries all kinds of things in order to express her feelings of oppression. I have tried to get inside her, body and soul, and to bring some things to the surface.

You very candidly describe the feelings and desires of the women in their lovemaking, but also the violence that the women experience. A great deal of criticism has been directed against you by the Arab press because of this. How much of a part does sexuality play in your writing?

Sobh: If I want to explore the relationship between my male and female characters, then, of course, sexuality is an essential part of that. I describe the relationship between Maryam's mother and father. The first time they have sex with one another is part of that. The scene reveals very strongly the patriarchal nature of the society and the pervasiveness of sexual violence. This has nothing at all to do with the kind of sensationalism that I am often accused of, but everything with the taboo that still surrounds this issue in our society. I write about repressed sexuality and about the tremendous fear men have of the female body.

The narrator, Maryam, is reminiscent of Scheherazade from The Arabian Nights. How much of an influence was that on you?

Sobh: In Arab literature it is usually men who tell us about the lives of women. They define us and create their own truth. In The Arabian Nights Scheherazade begins telling stories in order to save her own life and those of the other women. I have created a modern Scheherazade. She has retained the memories of three generations of women and she also led me back into life. The war silenced me. I felt as though I were one of those who go missing in war. I had to write this book to find my voice again. So I invented Maryam to tell the story for me.

Alawiyya Sobh was born in 1955; she studied Arab and English literature. She is chief editor of a women's magazine and lives in Beirut. She published a volume of short stories in the 1980s. 2002 saw the publication of "Maryam of the Stories"; the novel was excerpted in English in Banipal No 17. Other novels include "Dunya" (2006) and "It Calls Itself Passion".

Interview with Iman Humaydan Younes
Sectarianism as a Dead End for Lebanon
The books of Iman Humaydan Younes, with their poetic language rich in images and their sensitive insight into the interior lives of her protagonists, have led to acclaim for her work world-wide. Ariana Mirza spoke to the Lebanese writer about war, art and society

Lebanese Literature: Iman Humaidan-Junis
"B as in Beirut"
The Lebanese author Iman Humaidan-Junis has written a novel set in her country's civil war years. Her figures' stories, and thus the novel's atmosphere, are characterized by their disturbing and terrible ability to adjust to the reality of war. Angela Schader read the novel

END_OF_DOCUMENT_TOKEN_TO_BE_REPLACED
Social media
and networks
Subscribe to our
newsletter