In his novel, CrocAttack, Israeli writer Assaf Gavron provokes his readers with unusual perspectives: With both sensitivity and a large dose of black humour, the writer explores the inner world of an Israeli victim of terrorism and a Palestinian suicide bomber. Ariana Mirza spoke to Assaf Gavron 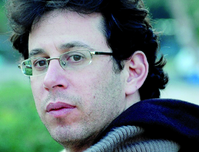 "It is not black and white", says Assaf Gavron

​​Mr Gavron, you are more than just a writer; you were also involved in the development of a computer game called "Peacemaker".

Assaf Gavron: In "Peacemaker", you play either the Israeli prime minister or the Palestinian president, and your goal is to secure lasting peace. When doing so, you have to take all interest groups and the most varied incidents into account. The game is really meant to show how complex the conflict is. It is not black and white, you know, there is no simple solution. My role in the development of the game was to be the writer; I was also in charge of all the images.

Do you know how many people actually find a solution when playing the game?

Gavron: I know that it is possible to win. In this game, you win if you secure peace and get the Nobel prize. I don't know if it is possible in real life, but in the game it is.

Were any Palestinians involved in the development of "Peacemaker"?

Gavron: Yes. It was developed in Pittsburgh in America, at the local University. Palestinian students were involved in the development process of the game. People in Palestine - politicians and others - were also asked for their comments. You can download "Peacemaker" all over the world. Two months ago, the Peres Centre for Peace distributed 100,000 free copies to teenagers on both sides, Palestinians and Israelis. So it has already reached a wide range of people.

Your book shows how little people on both sides know about each other. When did you personally start getting interested in the point of view of the Palestinian people?

Gavron: I have always been interested. And I think that at the height of the second intifada - when there were bombings, battles, and suicide attacks nearly every day - you could not really look away. You had to be interested in the other side. Not everyone was; but for me it was a very interesting process to try to understand.

Not only the Palestinians, not only the other side, but those who chose to fight, members of terrorist groups, like the character in the book. Trying to understand does not mean that I agree with what they do or sympathize with what they do. But I did find it very important to try to look into their minds. That's why I chose to write this character in the first person.

How did you go about developing the Palestinian character?

Gavron: I did a lot of research. I always do a lot of research, especially on this book. I read books and articles and I watched many documentaries about life in the West Bank. Another thing I did was to send an early draft of the book to people at the university in Gaza who can read Hebrew. They were very enthusiastic about reading it and they gave me very, very good comments. Generally they were very encouraging. They liked the book and they liked the Palestinian character. They thought that he was a believable character and that the portrait of life was good.

Do you think that literature has any influence on politics or on public opinion?

Gavron: On politics, I guess, no. I think it is probably naive to think that writers can change the world. But they can have an influence on public opinion, yes. People in Germany for instance reacted very positively to the book; they say that the book gave them a real insight to the lives of people here. They have seen the headlines down through the years, but are now getting to know two sides without prejudices. So I think literature can influence, and it can educate as well.

Have you already selected a topic for your next book?

Gavron: My next book will be based in the future, in Israel - or what is left of Israel in the future. It is set about 60 years into the future; the world has become a very dry place. Water corporations have all the money and all the power. As I said, Israel is very small; the rest is Palestine, and the Palestinians control the water in the region. So, the Israelis are very poor and under Palestinian power. The story itself is the story of a woman who is searching for her husband, who disappeared a few month previously. He is a water engineer. It is all related to water.

This sounds really interesting. But this is fiction. What do you think the situation in the Middle East will be in 60 years time?

Gavron: It is hard to say. I guess there are two options. One option is the two-state solution. But I am sure that even if there are two states, the wars and conflicts will continue. Maybe with Iran, or maybe with other countries. I don't know. The other option would be to have one state, which would have to be democratic.

The demography suggests that there will be more Arabs, more Palestinians in the area. So it would probably be one state - one democratic state - ruled by a Palestinian leader. And hopefully there would be some respect and coexistence between the two groups of the population. But it is really hard to say. I am saying that with very little confidence. But I guess those are the two options.

Assaf Gavron: "CrocAttack"
A Shrewd Insight into the Tragedy of Terrorism
In his third novel, "CrocAttack", Israeli author Assaf Gavron tells the parallel stories of an Israeli who survives three suicide attacks in a short space of time and a radical Palestinian. Volker Kaminski read the book and considers it a breathtaking montage

END_OF_DOCUMENT_TOKEN_TO_BE_REPLACED
Social media
and networks
Subscribe to our
newsletter