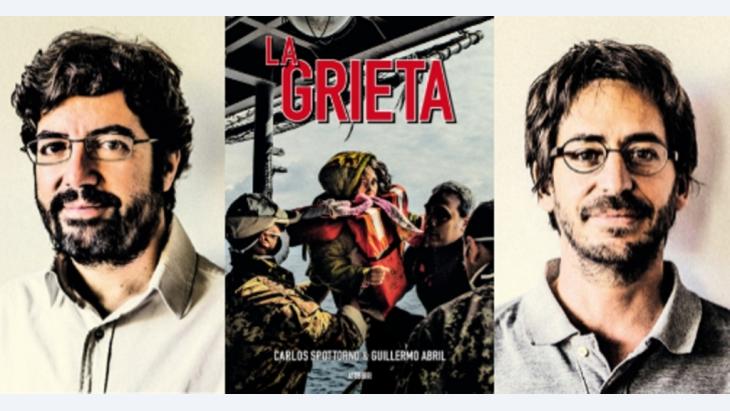 In their field journal “The Crack” photographer Carlos Spottorno and journalist Guillermo Abril report the unfolding of Europeʹs migrant crisis from Africa to the Arctic over the course of three years. Their aim? To identify the causes and consequences of Europeʹs identity crisis. Interview by Naima Morelli

What is the difference between producing a reportage and a book? Did you alter your approach?

Spottorno: In a media context you are always sharing your voice with the voice of the medium you are writing for. When you write something independently, you take full responsibility for what you say. There were also some details in the book that needed context to be explained. Lastly, the journal form allowed us to set a more personal tone, presenting different interpretations of the reality we observed.

"The Crack" draws on a number of different narrative strands – firstly, the way you researched the information as a journalist and the blockages and barriers you encountered; secondly, the different narratives that each country was trying to put about on how they are dealing with migration. And then, there are the brief moments where you allude to your personal life. How did you decide how much of yourself to put in the story?

Abril: It was something we decided on from the outset. Carlos and I felt we should always talk in a first person, as "us". We gave small hints of our own lives, to make us the witnesses in the story, thus allowing the reader to identify with the journal and see the changing Europe as we experienced it.

Spottorno: You need to follow a character to be hooked to a story. None of the characters you see in the book are ever repeated. Apart from us, you have no-one to follow from beginning to end. At the end of every chapter we included a brief passage of reflection, allowing the reader to see what was going on through our own eyes.

How did you manage to explain the reader all the micro-dynamics, while conveying a sense of compassion for the migrants and all the people you encountered?

Abril: Well, that is more or less the way I understand journalism. The role of a journalist is to talk about common people in the historical context. We go to talk to the migrants, we go to talk to the police or the media at the border, to the volunteers, the NGOs that are trying to help, but you need to understand what is going on under the surface. How countries are dealing with each other. 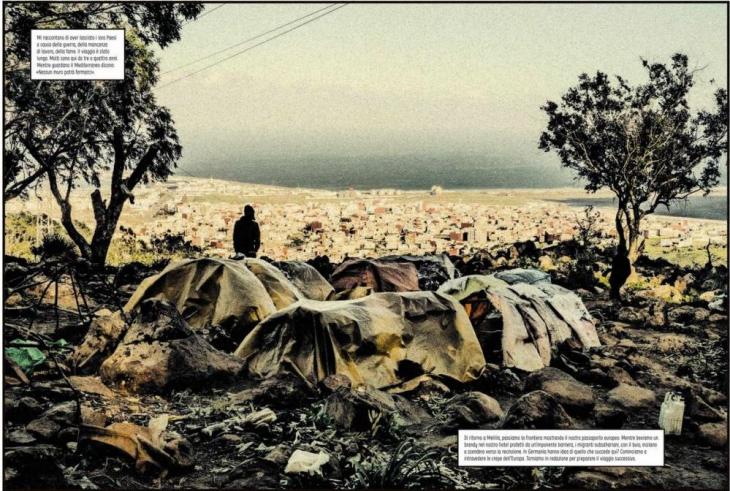 Carlos Spottorno: "We need to drastically curb the colonial economy. Itʹs one of the biggest problems. We all seem to think that colonialism is a thing of the past, but it is not. In a corporate context, we are still creaming off the profits. As Guillermo said, co-operation needs to be taken more seriously. But co-operation in the genuine sense of the word – it is not just about sending money to dig wells in the desert"

Why did you use the metaphor of the crack, and what are the main cracks that you have found in Europe during your research?

Spottorno: The idea was to transmit that the European Union is under so much pressure, both internal and external. Not all countries understand or feel the migrant crisis the same way. Some have said "close the door, nobody enters," others: "let them in." Some say "letʹs manage it with culture." What is happening at the border is creating little cracks which, if they become big enough and numerous enough, could eventually make the whole structure collapse.

Abril: At the beginning of the book we show Europe as a garden, where you can find human rights, social values and democracy. People feel it is a good place to be and that is why they want to come in the first place. During our trips from the end of 2013 through to 2016, however, we felt that, through its treatment of the situation, Europe had ended up compromising many of these values. In order to protect the rights of those who live in Europe, it seemed that these very same rights had to be relinquished for those coming from outside Europe. It is a paradox, and thatʹs where the idea of the crack came from.

Rather than provide easy answers, your book presents the nuance and complexity of the situation. What has changed since you published the work in 2015, given the current geopolitical scenario?

Abril: Iʹd say that Brexit is one of the main things, along with the rise of populism. Itʹs a black and white vision that we didnʹt have before, but is now plainly accepted. Politics has been affected by the rise of nationalist parties and alt-right parties, together with the rise of more populist parties to the left of the spectrum.

Still, I would say nationalism is the last gasp of something from the past. I believe this tribal idea of a country is disappearing. The world has changed so much since the era of the nineteenth century nation state. The way we connect and communicate around the world has been transformed. People are global, conducting transactions in different regions of the world around the clock.

You may also like: Refugees in Libya face catastrophic conditions

What would you say are still the biggest flaws in European Unionʹs migration policies?

Abril: We are constantly hearing in Europe that help is required in the countries of origin. Yet, of course, we need to rescue people at sea. We need to come up with a more humane, structured way of entering Europe. We need to initiate exchanges programmes with people in Africa and let them enter Europe to study. We need to give access to people from war zones. But much of what we hear is not based in fact. Thatʹs one of the basic flaws.

Spottorno: We need to drastically curb the colonial economy. Itʹs one of the biggest problems. We all seem to think that colonialism is a thing of the past, but it is not. We maintain colonial relationships with numerous countries. In a corporate context, we are still creaming off the profits. As Guillermo said, co-operation needs to be taken more seriously. But co-operation in the genuine sense of the word – it is not just about sending money to dig wells in the desert.

Abril: One thing that astonished me was the relationship between Europe and Libya. The gas and oil from Libya has continued flowing into Europe, but we are not letting people from Libya in. Capital flows, resources flow, but not people, and that is one thing that we somehow need to resolve. Thatʹs the idea of co-operation. Europe is built on a foundation of economic co-operation and integration. Yet the policy remains imbalanced when interacting with the rest of the world.

Recently you completed a new reportage on Palmyra for the weekly edition of EL PAIS, similar in style to that of "The Crack". Are there any other projects in the pipeline?

Spottorno: We are currently working on a story for an art institute in Austria about the border between Austria and Italy. There are so many things to be said about it from a historical point of view. The focus is once again on Europe and nationalism – and how national identity shapes the world.

Abril: This time, however, we are taking a closer look at the nature of borders. We want to try and explain where these nationalist ideas originate and how the situation can be resolved. Is it possible to leave this sense of border and separation behind? Our story about Palmyra was just this: crossing the border, leaving Europe, to see what is on the other side.

Since returning to power in Afghanistan, the Taliban have steadily eroded the rights and opportunities of women and girls, particularly their access to education. But Afghans are ... END_OF_DOCUMENT_TOKEN_TO_BE_REPLACED

The book "The Invention of the Maghreb: between Africa and the Middle East" prompts us to review basic terminology. This includes terms that we use almost every day as if they are ... END_OF_DOCUMENT_TOKEN_TO_BE_REPLACED

Tunisia has been going through a severe economic and political crisis in recent years. More than one in three young people there are unemployed. For many skilled, qualified and ... END_OF_DOCUMENT_TOKEN_TO_BE_REPLACED

At the end of every year, the team at Qantara.de gives you a run-down of the ten most-read articles on the site over the past 12 months. Here is a quick overview of the stories ... END_OF_DOCUMENT_TOKEN_TO_BE_REPLACED

The government in the Netherlands, one of the last European nations to abolish slavery, has made an historic apology. But some feel that there is still a long way to go. By Ella ... END_OF_DOCUMENT_TOKEN_TO_BE_REPLACED

To celebrate the bicentenary of the deciphering of the Rosetta Stone, the British Museum is running an exhibition entitled "Hieroglyphs: unlocking ancient Egypt" until February ... END_OF_DOCUMENT_TOKEN_TO_BE_REPLACED
Author:
Naima Morelli
Date:
Mail:
Send via mail

END_OF_DOCUMENT_TOKEN_TO_BE_REPLACED
Social media
and networks
Subscribe to our
newsletter