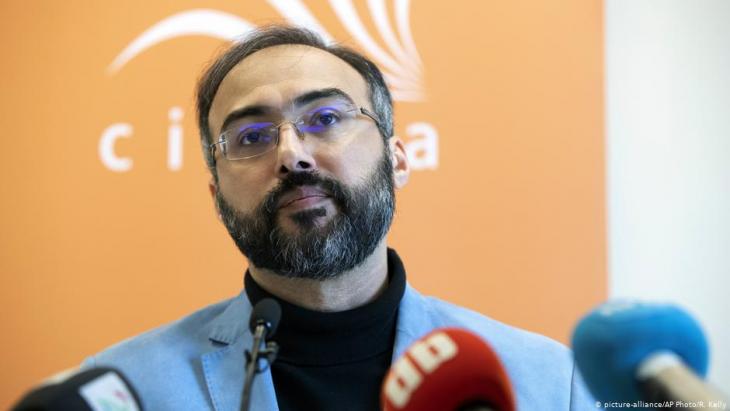 Saudi Crown Prince Mohammed bin Salman is accused of being behind the hacking of Amazon boss Jeff Bezos' smartphone. Diana Hodali talked to democracy activist Iyad el–Baghdadi, who cooperated with Jeff Bezos' security team, about the background to the attack

It all started in Santa Monica in April 2018: Hollywood producer Brian Grazer had invited a number of high–profile guests to his villa. Among the guests at the event was Jeff Bezos – Amazon boss, world's richest person, and Washington Post owner. The occasion: a visit from Crown Prince Mohammed bin Salman (MbS), as part of his global charm offensive promoting Saudi Arabia. What exactly Bezos and MbS discussed then is unknown. But one thing is certain: the two exchanged phone numbers, which were linked to their WhatsApp accounts.

An official UN report has now confirmed the suspicion that MbS hacked Bezos' phone via a WhatsApp message – presumably to keep tabs on the reporting of The Washington Post, for which Saudi journalist Jamal Khashoggi was a columnist. Seven months later, Khashoggi was brutally killed in the Saudi consulate in Istanbul. Another three months later, the tabloid National Enquirer published explosive details about Bezos' personal life, after which he launched an investigation, was blackmailed and went public with the story.

Iyad El–Baghdad is a Palestinian–born writer, head of the Kawaakibi Foundation in Oslo and a pro–democracy activist. He is a vocal critic of the Saudi Arabian government, and says he personally worked with Bezos' security team, which led to his falling into the sights of the Saudi regime.

How did you get involved in the Jeff Bezos hack story?

Iyad El–Baghdadi: The story from my perspective started in August 2018. That's when Jamal Khashoggi called me. He had the idea of establishing a disinformation monitor. You know, a way for us to look at the propaganda output of Arab dictatorships, particularly the Saudi dictatorship. Unfortunately, Jamal was killed in October 2018, which prevented us from starting the disinformation monitor as a formal project. Instead, we at the Kawaakibi Foundation devoted ourselves to the Saudi propaganda machine. After Jamal's murder we noticed that there was a concentrated propaganda campaign against Jeff Bezos, which started around the middle of October and then escalated in November. In November it became a countrywide propaganda campaign, blaming Jeff Bezos for The Washington Post’s coverage and taking all of that blame and putting it towards Amazon as well. We didn't know what to make of it at the time. We didn't know that there was a hack or anything like that. 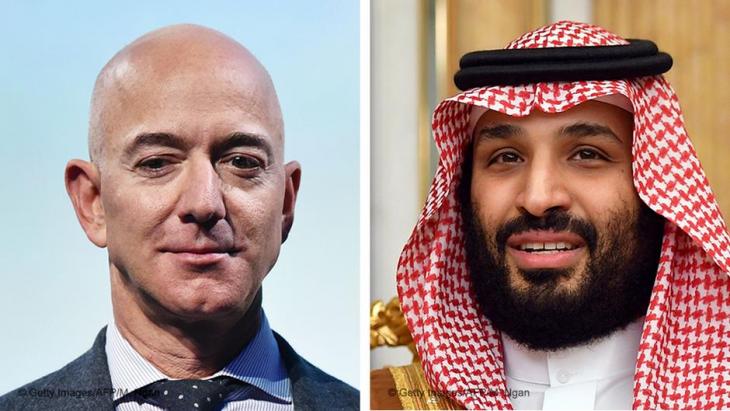 "Bin Salman is Watching You": according to UN experts, Saudi hacker software was most likely installed on the phone of Amazon founder Jeff Bezos in 2018. The trail leads right to the top of the Saudi government. UN experts are calling for an investigation into connections with the murder of Saudi dissident Khashoggi

Then, in February of 2019, Jeff Bezos wrote a Medium post saying that he had just experienced a blackmail attempt and hinted very strongly that Saudi Arabia was probably involved. We immediately put two and two together. Number one: we knew that MbS has a problem with Bezos, which was very clear because the propaganda output of his regime was really aggressive towards him. What we also knew was that they had an on-going business relationship. And we knew that Jamal Khashoggi's murder came in the middle of that. So we published our findings online and two days later we were contacted by the head of security for Bezos, Gavin de Becker. It was then that we began working together.

What did the work between you and the Bezos team look like?

El–Baghdadi: We compared the sequence of events. Ultimately a message was sent to Bezos from MbS saying that what he had been told was definitely not true. De Becker had informed Bezos shortly before about the findings of our two teams. And then the alarm bells began to ring: how did MbS know that Bezos had said anything at all? That was in February 2019 and we realized that they had apparently had access to Bezos' phone for months.

Why did we "wait this long" before revealing that Jeff Bezos's phone was hacked? After all we knew many months ago. And why the UN? Here's why:

El–Baghdadi: Jamal Khashoggi wrote for the Washington Post. MbS and other dictators are very sensitive when it comes to their image and public perception, because their legitimacy is linked to it. So it was very important for MbS to maintain a positive image in the world. He spent a lot of money on public relations – and he was very successful until March 2018. He even went on tour in the USA and met many famous people: not only Jeff Bezos, but also Oprah Winfrey and Bill Gates. At the same time Jamal Khashoggi was sitting at the renowned Washington Post and wrote one article after another about the fact that what MbS was saying was not true. This was a sensitive issue for MbS. About the same time, Jeff Bezos had his phone hacked. We assume that this was on 1 May 2018.

But they were also targeting Saudi dissidents in the UK, an unnamed Amnesty International employee, and only recently we learned that there was an attempt to hack Ben Hubbard's phone as well. He is the head of the New York Times office in Beirut. Of course it is quite possible that Jamal Khashoggi's phone was also attacked. But no one has access to his phone, because it is in the hands of Turkish intelligence.

You were apparently also targeted.

El–Baghdadi: This was in June last year, after the Bezos blackmail attempt happened. I was tipped off by a Saudi source saying that "you need to get rid of your phone immediately because they have succeeded in installing Pegasus spy software on it". I immediately dumped my phone.

I read that you had to move out of your apartment?

El–Baghdadi: Actually that wasn't directly related to the hack. But shortly after we broke the story about Bezos and Gavin de Becker proclaimed in an article that his investigation concluded that there was indeed a hack, a Norwegian intelligence officer showed up at my door and they took me away and said that I was the target of threats. Later I learned that these were emanating from Saudi Arabia. The CIA had apparently informed the Norwegians. I have been under protection ever since. 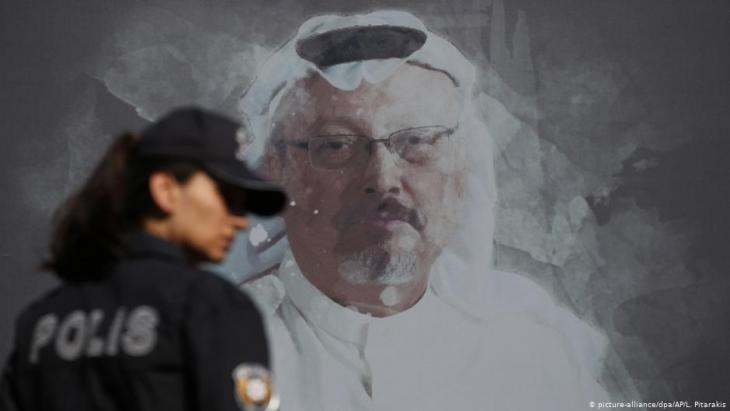 Relevant evidence for the investigation in the case of the killed Saudi dissident Khashoggi: "The circumstances and timing of the hacking and surveillance of Bezos reinforce the need for further investigation by the United States and other authorities into allegations that the Crown Prince either ordered or incited the mission to kill Khashoggi in Istanbul, or at least knew about the plot and did not stop it," wrote UN experts Callamard and Kaye

So you assume this was related to your contact with Bezos' security team?

El–Baghdadi: We don't have any proof that they hacked my phone any earlier, but they might have. It's crazy to think that MbS can be this reckless, but there are a lot of things that are crazy about modern Saudi Arabia. It's also crazy to kill a journalist in your own consulate and dismember his body and burn his remains. That's the thing – you're not dealing with a rational actor here.

Jeff Bezos' phone is said to have been hacked and he was also blackmailed.

El-Baghdadi: The fact that Bezos made the blackmail public set the ball rolling. David Pecker, the head of the media group AMI, a friend of Donald Trump, whom MbS also met, still owned the National Enquirer at the time. The National Enquirer had received information about the Jeff Bezos affair and published it in January 2019. At that time we did not know how they had received this information. Jeff then launched an investigation in January to find out how they got this information. Then the blackmailing began - and that's how it all took its course.

Saudi Arabia denies having anything to do with the allegations. What do you say to that?

El-Baghdadi: Fortunately they are not very credible. It must be terrible to work for such a government and for such a boss who drops one bomb after another that they somehow have to justify. 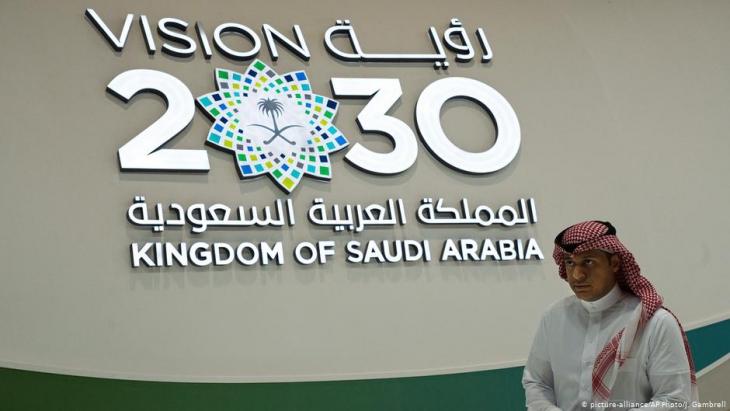 Iyad el-Baghdadi: "MbS is destroying the legitimacy of the Saudi regime, its legitimacy amongst its own people. It is also about his legitimacy in Silicon Valley, which he needs for his transformation plan 2030"

The FBI is involved in this case, but so is the UN. Why was the UN contacted?

El-Baghdadi: My team focusses on freedom and democracy in the MENA region and Saudi Arabia is the seat of tyranny in the region. It has to be remembered that the FBI cannot act against MbS, at most it can only act against American citizens who are involved in the case. Therefore, the United Nations is the right channel for such an investigation, especially as it is independent.

The assassination of Khashoggi triggered a wave of outrage. Meanwhile, the fact that people can be dismembered in a consulate seems to be accepted. Do you think that hacking the phone of the richest man in the world has any consequences for Saudi Arabia or MbS?

El-Baghdadi: Well, I think we have to be very careful what we mean by consequences. Many people, unfortunately Europeans, people in the West, seem to have a slightly different understanding of what the consequences might be. They won't bring him to court, and nobody will seek to have him deposed because you don't interfere in the internal affairs of a foreign country. MbS is destroying the legitimacy of the Saudi regime, its legitimacy amongst its own people. It is also about his legitimacy in Silicon Valley, which he needs for his transformation plan 2030. All this is damaging his reputation as a reformer all over the world. Nobody really believes him to be a reformer. And let's be clear: this person is trouble. Saudi Arabia and the entire MENA region deserve more than to be governed by such people.

END_OF_DOCUMENT_TOKEN_TO_BE_REPLACED
Social media
and networks
Subscribe to our
newsletter