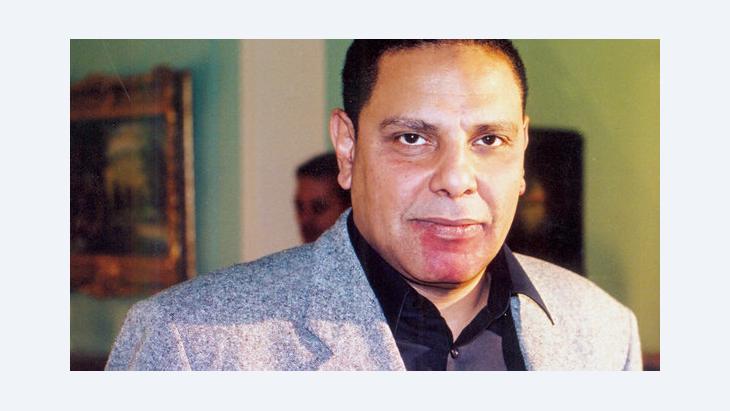 According to Egypt's renowned novelist Alaa al-Aswany, the Muslim Brothers' rule was a lesson for the country. "The idea of political Islam is now falling apart," al-Aswany asserts in this interview with Jannis Hagmann. But now, he warns, Mubarak's regime may try to take power again

Mr. Aswany, did you participate in the June 30 mass protests that led to the coup against Mohamed Morsi?

Alaa al-Aswany: I think you made up this question just to use the term coup.

Alaa al-Aswany: It was not a coup, it was a new wave of the Egyptian revolution. The real coup was staged by Morsi last November...

...when he issued the constitutional decrees that put his decisions beyond legal oversight?

Alaa al-Aswany: Exactly. If any head of government in Europe, if Merkel for example, put her decisions beyond the law, she would not stay in office one single day. And nobody would dare to talk about democracy and defend her as the elected Chancellor.

Isn't the discussion about the term coup a mere battle over semantics? By definition, it was a coup: The military deposed the government under threat of force, suspended the constitution and captured political leaders. Can't we just admit that it was a coup, but say that it was maybe still good for the country?

Alaa al-Aswany: You're missing the details. In every democracy, parliament has the right to call for early presidential elections. The parliament represents the will of the people. If there is no parliament – and that is the case in Egypt – the authority goes back to the people. 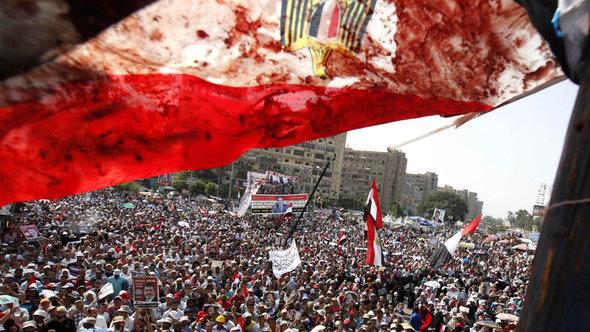 Egypt in turmoil: President Morsi's ouster was not a coup but a new wave of the Egyptian revolution, Alaa al-Aswani says. He argues that "the real coup was staged by Morsi last November," when Morsi issued the constitutional decrees that put his decisions above the law

​​Considering that 33 million Egyptians poured onto the streets and called for early elections and that Mr. Morsi has been elected by only 13 million, the ouster of Morsi was absolutely democratic.

Right after the mass protests that led to Morsi's overthrow, there was talk of millions of participants. You talked about 33 million, which would be more than a third of Egypt's population. Where did you get that number from?

Alaa al-Aswany: It was 33 million according to Egyptian and international news agencies. Of course, we can't count every single person taking part in the protests but to me these are reliable estimates.

The CNN estimated that the number of people who participated in the revolution against Hosni Mubarak was between 18 and 20 million Egyptians. Anybody could tell easily that the June 30 protests were even bigger.

Instead of the Muslim Brothers, many Egyptians now pin their hopes on army chief Abdel Fatah al-Sisi. Isn't that a paradox? After the military took power following Mubarak's ouster, it did not exactly cover itself with glory.

Alaa al-Aswany: I was among the fiercest critics of the SCAF, the Supreme Council of the Armed Forces. But give me one reason why al-Sisi would now get involved in politics that is not derived from a feeling of responsibility towards the country. The army always had its privileges and the SCAF tried to keep those privileges after the revolution. Now, by force of their constitution, the Muslim Brotherhood has given the army three times as much as it had demanded. So the army has nothing to complain about. 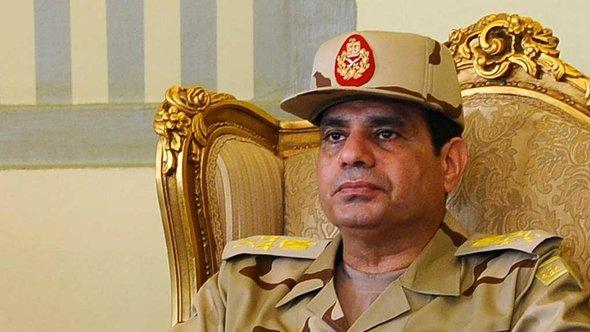 ​​Furthermore, we don't sign anything for forever. If Mr. al-Sisi shows political ambitions, you will be surprised of my opinion! The army must not interfere in politics. But when a fascist group with armed militants takes control of the state, little by little, the army is the only force that can counteract this.

You've mentioned armed militants. Do we not have to differentiate between the organization of the Muslim Brothers and the extremists who carry out attacks?

Alaa al-Aswany: I don't care about differences in organization. It's the same group.

Are you talking about the same ideology?

You still have to convince hundreds of thousands of people protesting for Morsi and the Muslim Brotherhood.

Alaa al-Aswany: I don't have to convince them. Who resorts to arms should be imprisoned. Those who don't take up arms can have the most bizarre ideas and will still be welcome to form a political party. That's democracy.

So the last year has been a lesson for Egypt?

Alaa al-Aswany: Yes, a very good one even. In the beginning, I called for giving Mr. Morsi a chance. Even though I was against the Brothers, I saw Morsi as an elected president. Now I feel very comfortable saying that Morsi has lost all legitimacy last November when he issued the decrees. Since then, you could not speak of democracy anymore.

Let me get back to my first question: Did you participate in the protests against Morsi?

Alaa al-Aswany: Of course, I cannot call for protests without going myself. The protesters this time were different. There was a small group of real revolutionaries and the feloul, remnants of the Mubarak regime. The latter were very few. The largest group were people who probably participated in a manifestation for the first time. That's why the protests reached these dimensions. People not necessarily supported the revolution, but they were scared of the Muslim Brotherhood.

Which challenges does the revolution face now?

Alaa al-Aswany: I already argued under Mubarak that there are three barriers that Egypt has to overcome. The first one was Mubarak himself. The second one is the military rule and the third one political Islam. Now we are done with the third one. 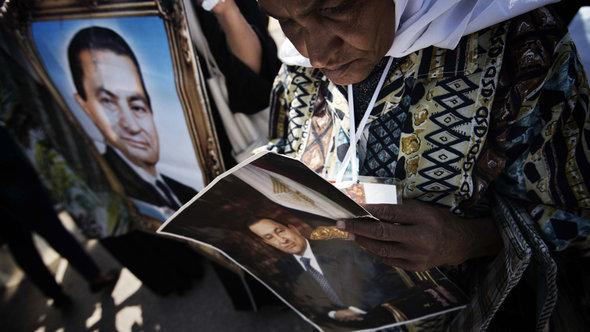 ​​But on the one hand, the danger remains that the military takes power again. As I explained earlier, this danger is not very imminent. On the other hand, the old regime might take over again. This danger is imminent. Mubarak's regime remains intact, just without its head.

Do you mean the National Democratic Party?

Alaa al-Aswany: Yes, the NDP is still there and might get back to power by bribing the poor voters in the same way the Brothers did. There is still the old security state and many of the journalists who led the struggle against the Brothers – which was very useful – belong to Mubarak's regime. They support Ahmed Shafiq, the former prime minister and presidential candidate in the 2012 elections. He is still there, too. There is no doubt that he will appear again at some point.

Mubarak came from the military ranks, too. Do you consider the old regime a parallel structure?

Alaa al-Aswany: The old regime has its structure outside or parallel of the military. The Mubarak people have money, TV channels, voters, supporters inside state institutions, everything. Many of the symbols of the Mubarak regime are now back on TV. We are not yet done, but as I said, we have overcome the three barriers: Mubarak himself, military rule and political Islam. That's why I am very optimistic.

The Egyptian series "El-Ekhteyar 2" was created by a production company with close ties to the military – and pursues a corresponding narrative. Moritz Baumstieger explains how ... END_OF_DOCUMENT_TOKEN_TO_BE_REPLACED

Looking to mobilise the Egyptians, Abdul Fattah al-Sisi and his ministers will refer to them as the "people". As soon as the Egyptians demand something of the state, however, they ... END_OF_DOCUMENT_TOKEN_TO_BE_REPLACED

The rollout of coronavirus vaccines in the Middle East and North Africa is already taking place on a massive scale, with the United Arab Emirates leading the way. Nevertheless, ... END_OF_DOCUMENT_TOKEN_TO_BE_REPLACED

Egyptian singer Umm Kulthum continuous to be an icon, almost 100 years after she published her first record. But what about the other famous women of the 1920s? In his new book, ... END_OF_DOCUMENT_TOKEN_TO_BE_REPLACED

The Prophet Muhammad never executed anyone for apostasy, nor encouraged his followers to do so. Nor is criminalising sacrilege based on Islam’s main sacred text, the Koran. In ... END_OF_DOCUMENT_TOKEN_TO_BE_REPLACED

Archaeologists have uncovered the remains of an ancient city in the desert outside Luxor in Egypt. They say it dates back to the golden age of the Pharaohs more than 3,000 years ... END_OF_DOCUMENT_TOKEN_TO_BE_REPLACED
Author:
Jannis Hagmann
Date:
Mail:
Send via mail

END_OF_DOCUMENT_TOKEN_TO_BE_REPLACED
Social media
and networks
Subscribe to our
newsletter