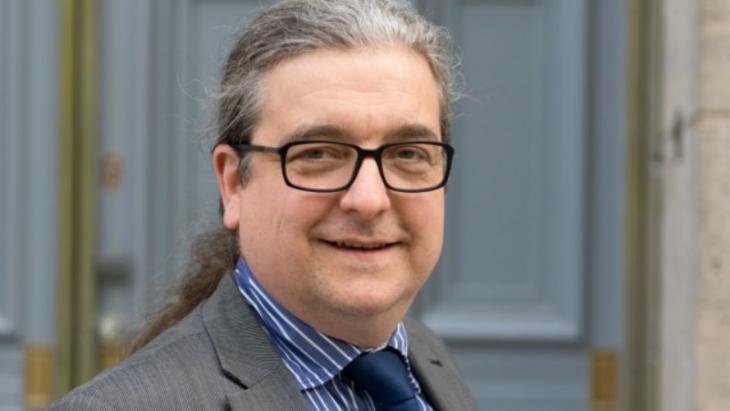 Father Tobias Zimmermann is the principal of a Catholic school in Berlin. He recently appointed a female teacher who wears a headscarf. Because schools should also serve an experimental purpose, he says. Interview by Julia Ley

Father Tobias Zimmermann, long grey hair, an earring in his left ear, is head teacher of the Canisius Kolleg in Berlin, one of three Jesuit schools in Germany. The school describes itself as a secondary school "with Christian-Humanist character". Young people should not only receive a good education here, but also mature to become responsible people. Zimmermann's decision to hire a headscarf-wearing Muslim woman as a teacher caused something of a furore in Berlin. Newspapers such as Die Welt, the Tagesspiegel and the Berliner Zeitung reported on the story, as well as the regional public broadcaster RBB. As Zimmermann is keen to stress at the outset, he was rather surprised at the media storm.  After all, he'd only appointed a teacher, hadn't he?

Father Zimmermann, at a time when the AfD is represented in the Bundestag, you appointed a Muslim teacher at a Catholic school. Did you intend to make some kind of statement?

Pater Tobias Zimmermann: No. The key factor was that this woman was very well qualified for the post. And it wasn't because we had too few applicants either. But how to deal with such an eventuality was something we had already discussed in advance. We've had a very diverse staff for a long time now: many of the teachers are Catholic of course, while a few grew up in East Germany and never had the chance to get to know Christianity from the inside. Others are Protestant. As far as the Muslims are concerned, today's situation reminds of the 1970s. Back then, we made the decision to begin accepting Protestant students. And then at some point, we appointed Protestant teachers too.

Over the past two years, you've started up two classes at the school for refugee children. Did the decision have something to do with that?

Zimmermann: Of course. We've got around 30 Muslim students at the school today, which gives Islam a different visibility. And it also gives rise to new questions: do we now need different spaces for prayer? Not necessarily Islamic, but at least ones where followers of different religions can pray together. We're also thinking about whether we should be offering Islamic religious studies.

So do children need to be taught by teachers who share their cultural background?

Zimmermann: Not exclusively, of course. But for me, school also offers the possibility for experimentation. Here we have the opportunity to enter into a dialogue with one another. And if society, such as it is here in Berlin, is characterised by a variety of world views, then this should be reflected in our teaching staff. As a Christian school we're experimenting here with something I believe constitutes a good school. 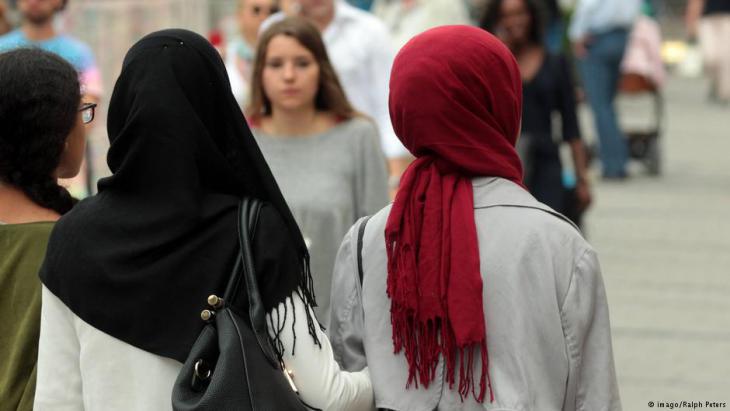 Asked whether, instead of demanding that Muslim women remove their headscarves, Christians should be displaying their own religious symbols, such as the crucifix, more openly, Zimmermann replies: "Yes, indeed. And then we need to talk to each other. We need an open discussion with the Muslim community about how to handle religious symbols"

How did students and parents react to the decision?


Zimmermann: The students really impressed me. They integrated the new students, who arrived before the teacher, with little fuss and as a matter of course. During the Christmas holidays, former students gave their time on a voluntary basis to organise a meet-and-greet programme for the new arrivals run by city authorities. So a teacher wearing a headscarf wasn't really a big deal anymore. Most of the parents were supportive. But I did receive a few really unpleasant emails.

The Canisius Kolleg represents Christian values. Can a Muslim convey these?

Zimmermann: In a city like Berlin, a Muslim can at least present a very credible case for the importance of religion. It's important to us that our students reflect on their religion. But we have religious studies for that. The new member of staff teaches maths and science.

Can you understand those people who see this as evidence of a "progressive Islamisation"?

Zimmermann: No, to be absolutely honest, not at all. Whenever I hear this view, I wonder at what point our society lost its self-confidence. Just look how many Muslims there are in Germany. It's absurd to talk about Islamisation. And in any case, we should be moving away from cliches. There are many different expressions of Islam too. So who are "the Muslims"? Sometimes, I really do wonder where this hysteria comes from. 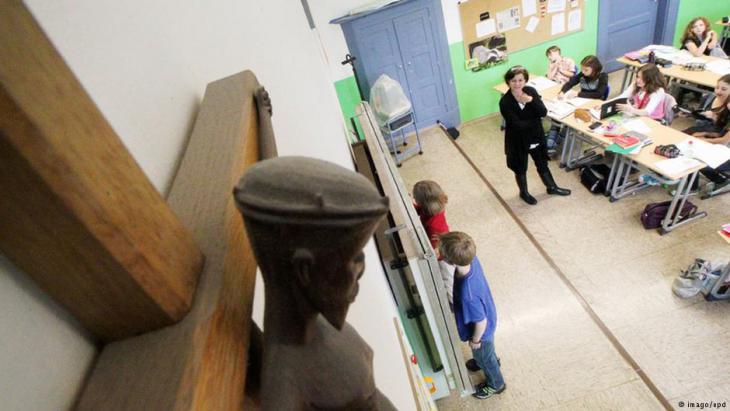 Father Tobias Zimmermann: ″I'm also against schools representing one single world view. Society isn't like that anymore. Muslims have been living in Germany for 60 years. And we've allowed the divide between us to be as large as it is – now, in the third generation"

Are we not sure enough of ourselves?


Zimmermann: A friend of mine refers to what we often see today as "relief pluralism". So as to avoid having to have any kind of discussion, we often agree on the smallest common denominator: no religious symbols whatsoever. For centuries, the greatest challengers of Christianity were the sceptics. Until at some point we decided to spare each other. For too long now we've been without opponents and that's why our discourse has become so monotone. Today, we're all just talking out of our own little bubbles and questioning the good will of anyone who doesn't live in the same bubble. Islam confronts us Christians with long-overdue debates.

As principal of a state school you should not have been allowed to appoint the woman in Berlin. The Berlin neutrality law prohibits teachers at state schools from wearing symbols and items of clothing that "demonstrate" affiliation with a particular religion. The state wants to remain neutral. Sounds right, doesn't it?

Zimmermann: Our German model of the neutrality of the state is often misunderstood. The constitution stipulates that the public sphere is characterised by diversity. It is the role of the state to ensure that differing ideologies can co-exist and that the discourse is characterised by tolerance. The state is not allowed to side with a religion or ideology. But to completely separate religion and state, that's French laicism – and it doesn't work, because it propagates a secularity for the public sphere that is itself a world view. In my opinion, this Berlin state law is a step away from the constitution.

Nevertheless, some people fear that a Muslim teacher could impose her faith on non-Muslim children.

Zimmermann: You're not generally allowed to impose your faith on someone else. The same applies to us, even though we're a religious school. Faith is based on freedom of choice. What isn't based on freedom of choice is ideology. But it's also the school's job to expose students to something – on the subject of religion too. Kant refers to school as "education to gain freedom from obligation". The goal of school is always freedom and that has to be tangible at every step. But school always operates on the fine line that at the same time, it's an obligatory institution. And part of that is exposing students to something, in this case encounters with others.

But a teacher also serves as a role model.

Zimmermann: Yes and for me that's about showing students how you embrace diversity in your life. To stand up for your convictions without imposing them on someone. Where, if not in school, is this kind of encounter still happening these days? I'm also against schools representing one single world view. Society isn't like that anymore. Muslims have been living in Germany for 60 years. And we've allowed the divide between us to be as large as it is – now, in the third generation. We haven't succeeded in getting the message of ″We want you as fellow citizens″ across. And that's a terrible waste of human potential.

German Middle East analyst Guido Steinberg and television journalist Ulrich Tilgner have both published new books on the conflicts in the Middle East. Their analyses and their ... END_OF_DOCUMENT_TOKEN_TO_BE_REPLACED

On 7 March, Switzerland became the latest European country to vote in favour of a so-called "burka" ban. It was yet another feather in the cap of the right-wing populist Swiss ... END_OF_DOCUMENT_TOKEN_TO_BE_REPLACED

Syrian-born Rafik Schami is a gifted storyteller and one of the most successful authors writing in German today. In his 50 years in exile in Germany, he has introduced the Arab ... END_OF_DOCUMENT_TOKEN_TO_BE_REPLACED

The Syrian war has moved through many phases and included a number of changing actors. But one aspect has remained constant throughout: the Assad regime is using the conflict to ... END_OF_DOCUMENT_TOKEN_TO_BE_REPLACED

It's no secret that the Baha'i community in Iran is persecuted. Now, a document has come to light that appears to show the extent to which the repression is state-sponsored. By ... END_OF_DOCUMENT_TOKEN_TO_BE_REPLACED
Author:
Julia Ley
Date:
Mail:
Send via mail

END_OF_DOCUMENT_TOKEN_TO_BE_REPLACED
Social media
and networks
Subscribe to our
newsletter