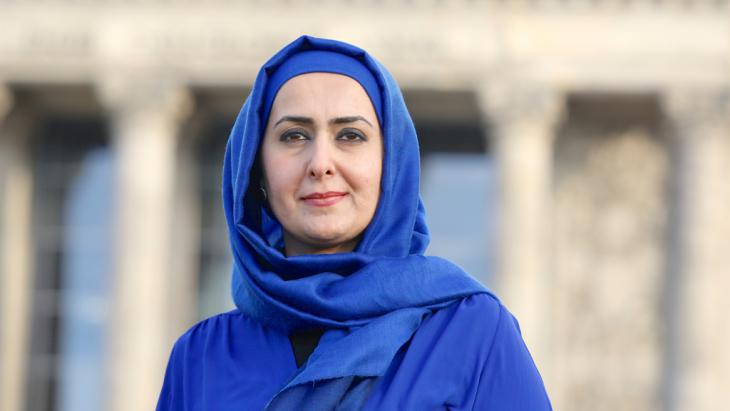 Fereshta Ludin is probably one of the most famous teachers in Germany. Her battle to be allowed to wear the headscarf in the classroom began in 2003 – initially without success. But she is optimistic following the latest ruling from the judges at Germany's Constitutional Court in Karlsruhe. She spoke to Emran Feroz

Fifteen years ago, you were turned down for a teaching post because you wear a headscarf. Now the Constitutional Court has overturned a blanket ban on headscarves. What's your assessment of the ruling and what was your first reaction?

Fereshta Ludin: I'm very relieved about the ruling and since I heard about it, I have felt a sense of great inner freedom that I couldn't have before, because the previous ruling imposed great restrictions and limitations on my own personal development. The laws previously in place were a massive discrimination, which is harmful.

Did you sometimes see yourself in the role of spokesperson or representative of all Muslim headscarf-wearers in Germany?

Ludin: I didn't personally feel like a representative, but I was more or less regarded as such by the public. My lawsuit had to be clarified at the outset of my case, because there were many incorrect insinuations and associations made. These accusations and incriminations had to be dispelled. This was unfortunately only possible through the courts. Later, my lawsuit became a legal precedent – and that the judiciary, politics and the media viewed it as such was out of my hands.

It was only the impact of the headscarf bans that increased awareness of how such legislation affected other people. During this time, the women concerned experienced extremely unequal treatment on the part of the judicial system in some federal states. The experience of recent years has made it clear to many people how disastrous such general headscarf rulings are for women's lives. A rejection of such general rulings has now put an end to this unequal treatment. 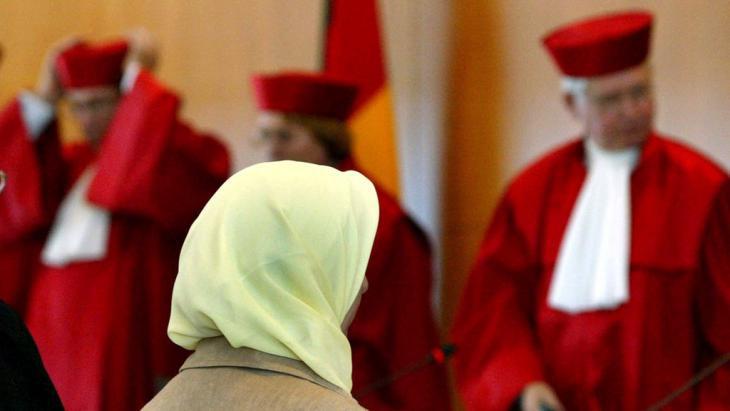 Fereshta Ludin at the Constitutional Court in Karlsruhe after the judges ruled on her case in September 2003. Ludin believes that life has become more difficult for women who wear headscarves. The ruling in 2003 has had a huge impact on the everyday lives of many women, said Ludin at the launch of her new autobiography in Berlin. The legislation allowing a ban on headscarves, which was then enacted in many states, fomented an abstract fear of Muslim women who cover their heads, she said

Many people still associate the headscarf with the repression of women, hostility to democracy and suchlike. Even the renowned left-wing philosopher Slavoj Zizek, who is himself anything but Islamophobic, writes in his most recent work "Blasphemous Thoughts. Islam and Modernity", that the need to keep women veiled is evidence of an extremely sexualised view and non-view of women. Why do you think there is a predominance of such opinions, even on the left-liberal part of the spectrum?

Ludin: I don't think that women should be "kept veiled". They should be allowed to decide themselves whether they're for or against, without being pigeonholed for it. There will always be women who are totally in favour of it or totally against it. As emancipated people, we should strive for a scenario where this decision is left to the women themselves. A free-thinking society should be robust enough to tolerate these conflicting practices in a respectful manner, without a sense that its self-awareness and self-confidence have been aggrieved or provoked.

Do you think that past headscarf bans here in Germany and approaches in other EU nations are stoking anti-Islamic sentiments, or even reinforcing them?

Ludin: Headscarf bans define what these pieces of cloth are supposed to signify. To link them to just one single interpretational possibility, namely the repression of women, is not only wrong, it also stigmatises. That does not do justice to the issue in question or to women themselves.

You recently published your autobiography. At one point in the book, you write: "I also no longer talk about whether wearing a headscarf represents an obligation in Islam, or why someone decides to wear it or not". In view of the current discussion, don't you think this is precisely what we need to be talking about?

Ludin: It was important to me to speak for myself. The decision for or against the headscarf is wholly a matter for the woman herself. In my autobiography, I make it clear how the desire to wear a headscarf developed in my case, and how I myself stand on the matter. There are at present theological and cultural arguments both for and against the headscarf. Ultimately, this question is a highly personal, individual and for many also a profoundly spiritual one. A woman should make the decision for herself – without any pressure from family, society or politics, or external expectations. 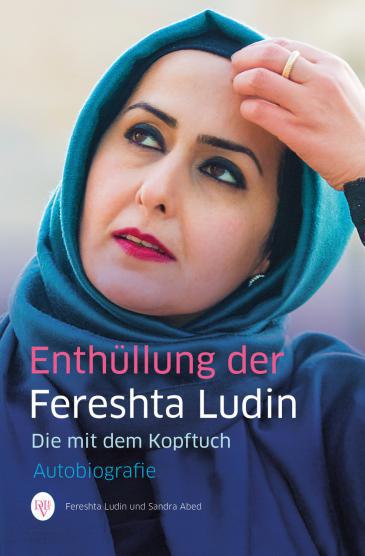 In her autobiography, "Die mit dem Kopftuch" (The woman with the headscarf), Fereshta Ludin writes "I also no longer talk about whether wearing a headscarf represents an obligation in Islam, or why someone decides to wear it or not"

To what extent do you separate your work as a teacher from your political activities?

Ludin: Teachers are always expected to keep their personal concerns in the background and not to discuss them in the classroom. I would expect the very same from a female Muslim teacher wearing a headscarf as from any other teacher.

How did your colleagues react to the judgement and to what extent does Islamophobia exist within the teaching community?

Ludin: Some teachers reacted with delight, others were speechless, because they don't know how to deal with the new situation. Islamophobia exists wherever knowledge about it is low. A rising fear and phobia develops automatically if you are given incorrect information or if you only derive your information from grievances.

It sometimes feels as though the headscarf debate is being conducted in a highly polarised fashion, also on the part of female Muslims in the public eye. There are daily blogs, interviews and articles – all focusing on nothing more than this piece of material. What's your take on this? Aren't there more important things to talk about, also regarding the interests of Muslims?

Ludin: We shouldn't forget that the anti-headscarf debate has been deliberately conducted by the media for more than 15 years. In this regard, on the one hand, pressure was put on those affected. On the other, they were only defined and perceived in the light of this discussion. These women wanted to put their side of the story too. After all, those affected were barely given the opportunity to air their views in the overall discourse. To this day, headscarf opponents are more present in the public arena and are well received by the majority of the population. Within the debate, it should be possible to support women in their personal and professional development. It should be less about appraising, stigmatising and categorising the headscarf itself. After all, the headscarf can be interpreted in many different ways. It's not a novelty in Islamic theology and tradition.

Can we now expect some detente in the public discourse in the wake of the ruling? Could it perhaps even serve as a model for other EU states, where similar debates are taking place?

Ludin: Each nation should be considered on its own merits. Every state has its own history, development and, consequently, legislation. I would of course like this enormous discrimination against Muslim women with headscarves to come to an end everywhere.

Home
Print
Newsletter
More on this topic
The headscarf ruling from Germany's Consitutional Court: Heated debate on all sidesWomen's dress code in Islam: No compulsion to wear the headscarfBook review: Emel Zeynelabidin's "You grow up only in this life": The headscarf is not a gauge of devoutnessThe hijab: Power and the headscarf
Related Topics
Education, Feminism in Islam, Gender, Islam in Europe, Islam in Germany, Justice, Muslim women, Rule of law, The Headscarf Controversy
All Topics

Research project "The Global Qur'an", brainchild of Professor of Islamic Studies Johanna Pink and sponsored by the European Research Council, analyses the history and ... END_OF_DOCUMENT_TOKEN_TO_BE_REPLACED

As the Western world emerges from a holiday season made less festive by COVID-19, millions of children in Afghanistan are starting 2022 facing the prospect of famine, illness, and ... END_OF_DOCUMENT_TOKEN_TO_BE_REPLACED

A wedding extravaganza of bright colours, flowers, feasting and dancing, yet the bride, Nefie Eminkova, who comes from Bulgaria's Pomak – Muslim – minority, can see none of it. ... END_OF_DOCUMENT_TOKEN_TO_BE_REPLACED

Every year in December, the team at Qantara.de takes a look back at the articles that proved most popular with our readers. This year is no different. Here is a run-down of the ... END_OF_DOCUMENT_TOKEN_TO_BE_REPLACED

Jesus – Issa in Arabic – doesn’t merely enjoy the highest place among the prophets in the Koran. He is also revered in Islam’s mystical tradition for his message of love and mercy ... END_OF_DOCUMENT_TOKEN_TO_BE_REPLACED

The military in Sudan has never waged war against a neighbour, but it has already staged 17 coups. Tens of thousands of people are risking their lives to oust the military by ... END_OF_DOCUMENT_TOKEN_TO_BE_REPLACED
Author:
Emran Feroz
Date:
Mail:
Send via mail

END_OF_DOCUMENT_TOKEN_TO_BE_REPLACED
Social media
and networks
Subscribe to our
newsletter