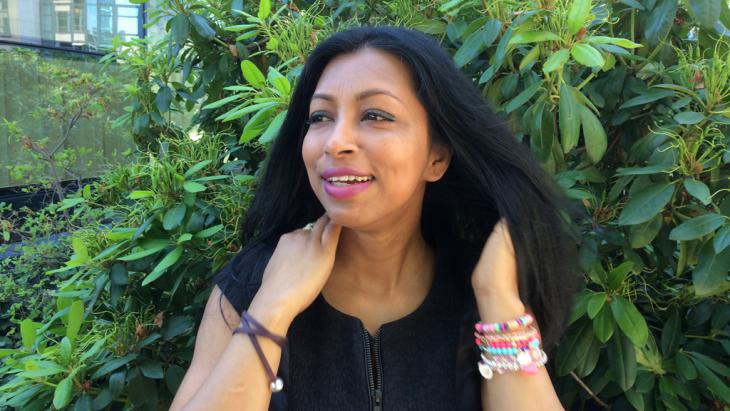 Interview with French-Indian author Shumona Sinha
″Looking for the truth″

Sinha′s novel ″Erschlagt die Armen!″ is based on her personal experience of working in a French agency where refugees apply for political asylum. Flying in the face of political correctness, the book has now won her a major literature prize. Interview by Sabine Peschel

Shumona Sinha, we're meeting on a special day. Yesterday the people of Great Britain decided to leave the European Union. How would you have voted?

Shumona Sinha: If I had the chance, I would have voted to stay in Europe. It is a very complicated situation. As a writer I do not have the capacity to answer geopolitical questions. I can only have raise questions – in a very fictional form.

The French politician Marine Le Pen of the far-right "National Front" strongly advocates holding a similar referendum there too. Are you afraid of similar developments in France?

Sinha: They're already going on. Marine Le Pen always capitalises on any incident in the world, be it Orlando, Bataclan, Charlie Hebdo or the Brexit. Dishonest people will always do that to promote their ideology or propaganda.

Extremist or rightist forces are on the rise in many countries. Indian Prime Minister Narendra Modi, from the BJP, is a force for fundamentalist Hinduism, which is responsible for the genocide of the Muslims. A former member of his party assassinated Mahatma Gandhi. We forget these things, but the rise of radical forces in the world is actually very frightening.

You're here in Berlin because the "Stiftung Elementarteilchen" (Elemental Particles Foundation) and the "Haus der Kulturen der Welt" (House of World Cultures) are awarding this year's International Literature Prize to you and your translator Lena Muller for your novel "Erschlagt die Armen!" ("Assommons Les Pauvres!" in the French original, translating as "Slay the Poor!"). How do you feel about this recognition in Germany?

Sinha: I'm honoured and I didn't expect it. I was so happy to be on the shortlist. I have just begun my career as an author in the French language and this was only my second novel. The third one, "Calcutta," was published in 2014 and the German translation will be out in August. I think this kind of generous award means a lot to both of us, to carry on surviving as a writer and a translator. 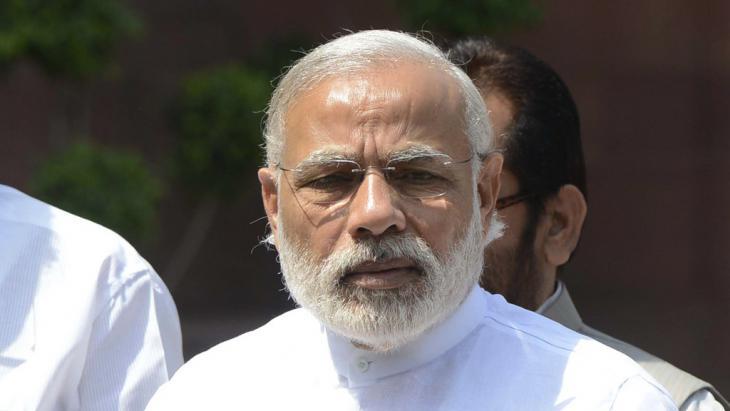 Shumona Sinha: "extremist or rightist forces are on the rise in many countries. Indian Prime Minister Narendra Modi, from the BJP, is a force for fundamentalist Hinduism, which is responsible for the genocide of the Muslims. A former member of his party assassinated Mahatma Gandhi"

It seems to be a very political book. It's about refugees – mainly from Bangladesh, Pakistan…

Sinha: West Bengal too. Sometimes people from India will say they're from Bangladesh because then they get the chance to apply for asylum.

But people from Bangladesh won't get asylum without political reasons.

Sinha: Actually OFPRA, the French immigration authority, rejects 100 percent of Bangladeshi political asylum applications. They think that this whole system of Bangladeshi refugees – not Syrian, Chadian, Iraqi or Afghan refugees – is linked to the mafia and that there are people making money out of it by exporting Bangladeshi people.

But people continue to pour into Europe. I write and say the same thing today that I was writing in my 2010 novel that was published in 2011. People from Bangladesh have their dreams and are being exploited. And the system is forcing them to lie, because if they don't declare they are political refugees – if they say instead that they are fleeing economic or ecological conditions – they won't even get a chance to talk about their problems.

Did you write your book to criticise the asylum system in France? 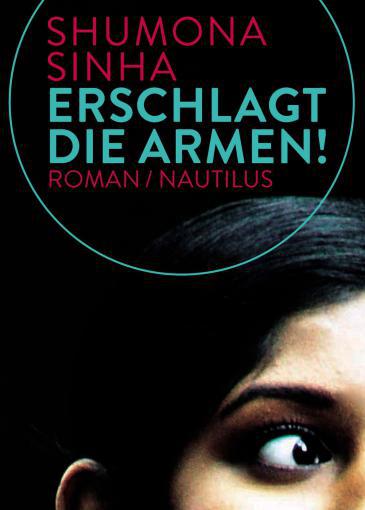 Sinha was awarded the International Literature Prize for her novel "Erschlagt die Armen!" (Slay the Poor; "Assommons Les Pauvres!" in the French original), a book about the experience of an Indian-born interpreter working at a French agency where refugees apply for political asylum. In a statement, the jury explained its decision, saying, "The first-person monologue avoids both a paternalistic view and xenophobic paranoia"

Sinha: I started writing without any intention. I just felt compelled to write. Working as an interpreter after 12 years in France – before that I was a teacher – I was overwhelmed to see fellow people in such a distressful situation.

Going home after interpreting all day, I felt compelled to write. I wasn't thinking it might later become anything like a novel. It was a physical reaction to harsh reality. I only gave it a fictional form in a second work phase.

Not only do you criticise the French authorities, but the refugees as well. Some might consider that politically incorrect. Has this stance led to many misunderstandings?

Sinha: I must say that in France the book has had an overwhelmingly positive reception. Luckily for all of us, there was no such misunderstanding. No right-wing organisation bothered to capitalise on my book. The media, the critics and most of the readers did not interpret the book that way.

Secondly, I think the role of literature is not to take a side. My role as a writer is to search for the truth. If you do that, you can't be nice. You can't be gentle. I think my book is very altruistic in a way. I gave my time, energy and thoughts to these people. I can't talk about Germany, but in French society, these are people who don't exist. They are only numbers in files, without faces, without a history. Thanks to the writer, thanks to the novel, these people gain an existence.

I may be hugely criticising the system and the refugees, but not with the intention of being politically incorrect. I was just looking for the truth and depicted it as I saw it and felt it.

Why did you choose "Assomons les pauvres," a line from a poem by Charles Baudelaire, as your title?

Sinha: The book is about giving dignity to people who have lost it – as in Baudelaire's poem, where the beggar only starts to stand up for himself after he gets beaten on the head.

Is your novel highly realistic?

Sinha: It's strongly inspired by reality. But I also see literature as a fantastic, marvellous perversion of reality.

Sinha: I mean that in a very good sense, as an altered, perverted version of reality. It is only a single truth, that of the narrator – the narrator's side of my side of truth. I don't own the truth.

After the book was published, you lost your job.

Sinha: I was very shocked and angry when OFPRA levelled accusations against me and I lost my job. I don't think they have literary sensitivity. They didn't want one of their employees to comment on their system. They didn't know who I was or try to understand me. And I'm not the only one: lots of interpreters are painters, photographers, journalists. OFPRA doesn't accept this intellectual side, or any other side of human beings. That shows how much the system has become dehumanised. It treats Bangladeshis like numbers and interpreters like robots. 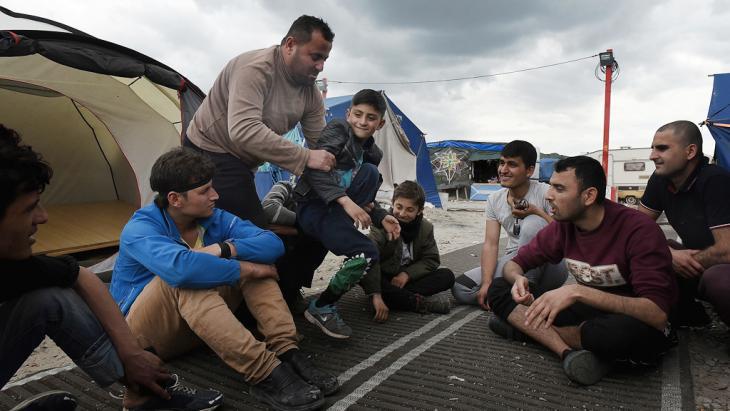 Alienated on the fringe of society: "in French society, these are people who don't exist. They are only numbers in files, without faces, without a history. Thanks to the writer, thanks to the novel, these people gain an existence. I may be hugely criticising the system and the refugees, but not with the intention of being politically incorrect. I was just looking for the truth and depicted it as I saw it and felt it"

You have mastered a number of languages: Bengali, English, French. Why did you choose to write in French?

Sinha: I started writing in Bengali. I grew up with literature from all the great writers of the world. But I never had a very literary relationship with the English language. Language isn't just a mode of expression. It's also substance: it's also the way I think. In French, my whole thought process is done in a very analytical, rational language. That has somehow freed me as a woman and as a female writer.

The Russian-American author Vladimir Nabokov, the Chinese-French Nobel prize-winning novelist Gao Xingjian: many writers have flourished in a foreign language. But don't you somehow feel restricted, writing in a language that is not your mother tongue? Is it the same as in Bengali?

Sinha: Absolutely not. We had wonderful Bengali writers up till the 50s and 60s. But what is happening in Bengali literature today? It has somehow lost its profundity. For a revolution in the Bengali language, we need a new Derrida or Chomsky or a Marguerite Duras or George Bataille.

There will always be a difference, of course. It's like living in a building that is under construction. I don't want to – and I can't – live in any other language that is perfectly built, languages like my mother tongue or English. They are beautiful palaces, but I won't live there.

You moved to Paris in 2001 to study, married and remained there. As a well-educated migrant, what do you think about Germany's policy toward the millions of refugees that have come and continue to come to Europe?

Sinha: I think it's wonderful that Germany has opened its doors to refugees. It will change so many things on so many levels. The debate always moves in a circle. There will always be crises. Maybe in 20 years we will have a new equilibrium – and then it will tumble down again. It is such a pity that we haven't yet found a planetary strategy to live in peace.

We are in favour of human rights. But One Love armbands are self-righteous and ignore some fundamental issues. Stefan Buchen examines the debate surrounding the World Cup in Qatar END_OF_DOCUMENT_TOKEN_TO_BE_REPLACED 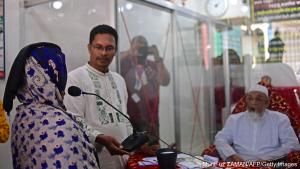 Attitudes towards Rohingya people in Myanmar have shifted, due in part to the civil war. But this does nothing to alleviate their misery. By Rodion Ebbighausen END_OF_DOCUMENT_TOKEN_TO_BE_REPLACED

Global warming is driving domestic migration in Bangladesh, which sits just above sea level. With a population of 160 million, it is the most densely populated nation in the world ... END_OF_DOCUMENT_TOKEN_TO_BE_REPLACED

Heavy rains and storms are causing huge floods and high water in both countries. Tens of thousands of people have had to leave their homes so far. ... END_OF_DOCUMENT_TOKEN_TO_BE_REPLACED 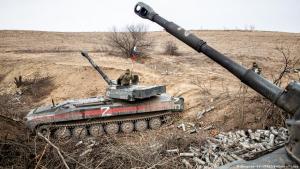 In an open letter, the Russian embassy in Dhaka has accused newspapers and broadcasters of "undermining" relations between Russia and Bangladesh END_OF_DOCUMENT_TOKEN_TO_BE_REPLACED
Author:
Sabine Peschel
Date:
Mail:
Send via mail

END_OF_DOCUMENT_TOKEN_TO_BE_REPLACED
Social media
and networks
Subscribe to our
newsletter