"We Should Not Baptise the Basic Law"

In this interview with Johan Schloemann, Friedrich Wilhelm Graf, the Protestant theologian and one of the most eminent religious interpreters of our time, comments on the current debate about Muslims and the German system of values and explains why the neutral, liberal constitutional state must be defended so that it can recognise the differences between the religions

According to Friedrich Wilhelm Graf, "the current usage of the term 'Christian-Jewish' is dangerous because it qualifies the differentiation between law and religion"

​​In response to Christian Wulff's comments on Islam, Volker Kauder, chairman of the CDU/CSU parliamentary group, and others are now talking about the "Basic Law, which is based on our Christian-Jewish heritage". What is meant by this phrase?

Friedrich Wilhelm Graf: First of all, let me say that this assertion is simply incorrect. The modern constitutional state – and in particular the state based on the rule of law in Germany – was, to a great extent, pushed through despite the opposition of the Church. For example, well into the 1950s, the term "human rights" was viewed in a rather critical light and considered to be a liberalistic aberration of modern humankind in the discourses of the two major Churches.

Later, within the context of the discussion on human dignity, people began to reflect more on religious roots. The term "human dignity" dates back to the Stoics of the ancient world, was later adopted by the Christian Fathers of the Church and subsequently honed by Christian Renaissance philosophy. However, the close link between human dignity and ideas of likeness is a construct of the twentieth century.

And what does the term "Christian-Jewish" – which is being used with political intent – actually mean?

Graf: This term is not very helpful at all because it glosses over the fundamental differences between Christianity and Judaism. It is an expression that was primarily coined after 1945 and subsequently indicated political correctness.

It is quite true to say that Old Testament or Hebrew-Jewish prophetism institutionalised universalistic ethics and also influenced Christianity, but the current usage of the term "Christian-Jewish" is dangerous because it qualifies the differentiation between law and religion. 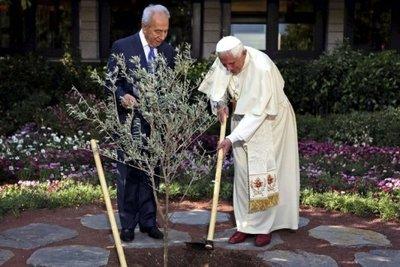 Graf also feels that the term "Christian-Jewish" is "not very helpful at all because it glosses over the fundamental differences between Christianity and Judaism". Pictured: Pope Benedict XVI and Shimon Peres planting a tree together

​​ To what extent is it dangerous?

Graf: The liberal constitutional state thrives on the very fact that it is neutral in matters of religion and that it differentiates clearly between moral, religious and legal issues.

Graf: The constitution is a product of enlightenment thought. What's more, the entire rhetoric of values is highly ambivalent because it undermines the differentiation between moral and law. As a citizen of a state, one has a duty to abide by the law, and this duty applies regardless of the one's religion. One is not, however, obliged to uphold any particular "values". It is not as if Muslims who migrate to this country, who are citizens of this country, have to accept a set of values; they must accept a set of laws.

It has been said that while it is all very well to say that Islam is part of Germany, Islam does not actually contribute anything to our values. Is there not a difference between the normative "contributions" made by native Germans and those with different religious beliefs who have migrated to this country?

Graf points out that it is not only Islam that is not fully compatible with the laws of the Federal Republic of Germany, the canon law of the Catholic Church is not either

​​ Graf: No. There is tension between religious law and state law in all religious cultures.

The canon law of the Catholic Church is not fully compatible with the laws of the Federal Republic of Germany, but no-one is saying that Catholics are not German citizens. In both cases, the reason for these tensions is that moral, cultic concepts and ritual rules collide with other rules such as family law.

Why has the phrase "Islam is part of Germany" caused such an uproar?

Graf: I don't understand it; the sentence is not very original. Wolfgang Schäuble said something similar years ago. Nor is the sentence particularly intelligent; it swings between empiricism and positive evaluation.

The debate surrounding Thilo Sarrazin has stirred up a huge amount of emotion. What has religion to do with the real problems relating to the integration of immigrants, which are currently the subject of such debate?

Graf: Well, many immigrants do not define themselves primarily through their religion. It is much more often the case that majority society or political players define them in terms of religion. However, many of the Muslims who live in this country are not particularly religiously active.

This contradiction leads to tension. The reverse is also true: being a Christian can mean a lot of different things: being a member of a Church, actively living the faith ... the Islamic communities in the Federal Republic create a similarly diffuse and ambiguous image.

There is very little point attaching the same "Muslim" label to an Egyptian doctor, an Iranian physics student and an illiterate person born in the Federal Republic.

So the term "Islam" – just like the terms "Christianity" or "Christian-Jewish" – is currently being used primarily as a political battle-cry?

Graf: Yes, to a great extent that is so. In any case, these are not terms that are going to help us adequately define the social problems that we face. It is well known that these problems are related to the fact that although it did not want to be, Germany was for many years a country of immigration. For this reason, immigration to Germany was not properly managed and monitored.

The "dialogue of the religions" is repeatedly put forward as a way of containing threatening cultural conflicts.

According to Graf, "religious dialogues do not help when it comes to certain social conflicts or educational problems"

​​ Graf: A "dialogue of the religions" is generally conducted by religious officials. That is a good thing; it is always good when people talk to each other and gain clarity on differences, traditions and orientations.

In pluralistic societies, it is necessary to talk about instances of normative dissent. However, this makes state law even more important as a means of ensuring peaceful co-existence.

Religious dialogues do not help when it comes to certain social conflicts or educational problems. What is decisive is a long-term education policy, which is already bearing fruit in some areas. In cases where people are overwhelmed by a complex society like ours, it generally has little to do with religion.

Admittedly, religious categories in politics are often no more than battle-cries, but what about actual collisions between a secular sate and devout religious practice that deviates from the practices of the secular state, for example in the fields of education or upbringing? Is this not an indication that there are very different concepts of what religious freedom is?

The German tradition is to grant religious players robust rights and for the state to be neutral in terms of religion and world view, while at the same time adopting a positive attitude towards religious communities. This specifically German model can also be applied to Muslim players in the country. However, some countries in the rest of Europe take a very critical view of this. We can expect further disputes in this regard.

What will take us forward: a commitment to Germany's traditional approach to religious freedom or a strictly lay approach that involves banning headscarves from schools? 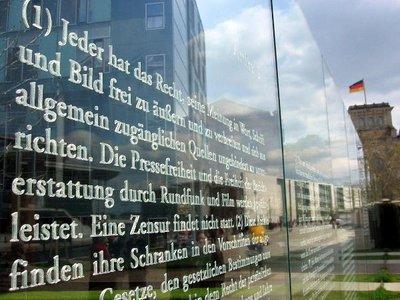 "A corresponding state church law – I prefer to use the term 'religious constitutional law' – must also be part of o the Basic Law," says Graf. "This is open to pluralism, but it does not presuppose a commitment to Christianity"

​​ Graf: Well, laicism has certainly had a counterproductive effect. In France, it certainly did not solve any conflicts; it created new ones. Here, Muslim schoolgirls are allowed to wear headscarves; a ban would be quite damaging.

More flexibility, more openness towards the manifestation of religious convictions in the public sphere seems to me to be more worthwhile than greater repression. By the way, the special heritage of such religious freedom is also anchored in law.

A corresponding state church law – I prefer to use the term "religious constitutional law" – must also be part of the Basic Law. This is open to pluralism, but it does not presuppose a commitment to Christianity. What I mean is this: we should not baptise the Basic Law; it will only make everything much more difficult.

Friedrich Wilhelm Graf is a Protestant theologian based in Munich. His most recent book, Missbrauchte Götter (Misused Gods), was published by C.H. Beck in 2009.

Islam and the West
Plea for Competition between Values
Our dechristianized West is disturbed – to a greater or lesser degree – by the visibility of practising Muslims. Yet, whoever expects the secular state to treat different worldviews equally should not fear competition between value systems, writes the Islam expert Ludwig Ammann in his essay

END_OF_DOCUMENT_TOKEN_TO_BE_REPLACED
Social media
and networks
Subscribe to our
newsletter