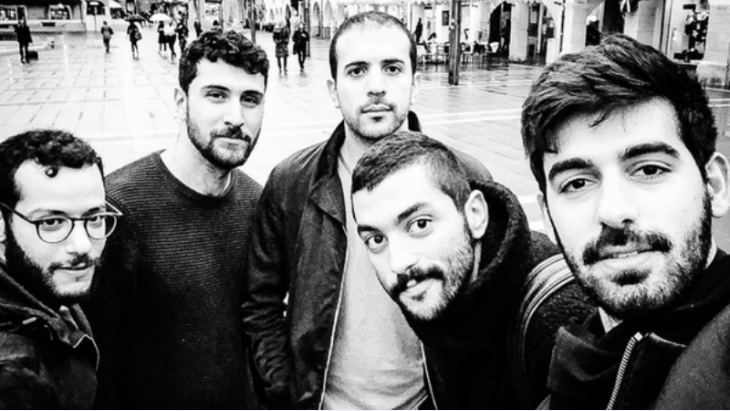 Mashrou' Leila is the most popular indie rock band in the Middle East – and the most controversial. Singing about politics and gay desire, they have faced bans in various countries. Yet at the same time they are becoming increasingly popular in Europe and the U.S. Ceyda Nurtsch talked to them about checkpoints, indie rock music and cliches

In Arab countries you are regularly faced with bans – such as recently in Jordan. At the same time, you are becoming more and more famous in Europe and the U.S. How do you explain your success outside the Arab world?

Hamed Sinno: Yes, we′re faced with bans in the Arab world, but nevertheless the success we enjoy in Europe, the U.S. or Canada is nothing compared to our Middle East fan base. Of course, people are generally interested in the region – its politics and the relationship between the Middle East and the rest of the world is something quite unique. With the Internet, however, it has become very difficult for many people to accept what the Arab world is in simple terms. Unfortunately, lots of people think that everyone in the Arab world is either extremely conservative, oppressive or repressed. Although it is self-evident that life in the region is as complicated as anywhere else, this is not reflected in the media. That′s why people consider the band significant. It is now harder to maintain that very Eurocentric version of the nature of global culture.

Are you received differently by audiences in Arab countries than by those in Europe or the U.S.?

Sinno: At the end of the day it depends on the crowd. We have played concerts in Europe where everyone in the audience knew the music and understood the lyrics, because they had done some research and had been following the band for a while. We have had concerts in Paris where half the audience was European, but they were singing along because they had memorised what it sounds like. It is difficult to generalise. But we really appreciate the reviews we get in Europe or in Canada, especially the ones that really address our music, the structure and the lyrics. We don′t get that kind of music criticism in Lebanon very often.

You are a band that polarises. On the one hand your fan base grows; on the other hand governments ban your CDs or your concerts. What′s it like on a personal level?

Sinno: All of us have been thoroughly attacked on social media, but at the same time all of us have been heavily supported on social media. This is part of the blessing and the curse of being in the public eye. One of us has been attacked twice personally in public, once in a bar in Beirut and once in Morocco and it wasn′t because of LGBT issues. It had to do with conservatism. They said we were destroying the language. But we′re thick-skinned and at some point it becomes de-personalised. It′s just people and their opinions.

The Guardian wrote about you, you had a “dazzling aura of resistance”. Do you see yourselves as a resistance band with a mission?

Sinno: Being resistant and having a mission are two separate things. We are an extremely resistant band. From a career point of view, it has been a constant struggle, carving out a career path in a country that not only has no infrastructure for independent music, it doesn′t have any cultural appreciation for genuinely independent music either. Trying to sound musically different from what the mainstream is constantly churning out as ″Arab″, which is essentially revived folk music, imposed on the population under the premise of collective identity. And then there are our lyrics, which we use to address issues that certain people are clearly uncomfortable with. This ongoing struggle, this resistance, doesn′t necessarily stem from clear cut political motives, but instead from the desire to remain true to ourselves and pursue careers doing what we love.

Shortly after you formed, the Arab Spring took place in various Arab countries. Did this movement have an impact on your music?

Sinno: You could say that. But the very concept of the Arab Spring is, to be honest, a strange one. It was a term coined by the Western media to try and simplify the complexity in the Middle East. To describe what was happening in very different countries facing very different and complicated political issues with their own communities rebelling against them. That said, many Lebanese people would argue that this ″Arab Spring″, this welling up of political tension, began in Lebanon back in 2005 when Lebanon did indeed have its own ″Lebanese Spring″. Growing up in that atmosphere exposed a lot of people to how relevant politics are to daily life, how everything is basically political. In that sense it has given us a lot of awareness and interest and that has affected our work. The things that happened in Lebanon and the region as a whole changed us as human beings and thus changed our music. It is not a question of pinpointing which phrase was influenced by which incident. Rather it was a general process of maturation.

There are times when politics get so intense that they mobilise you, making you want to change things and spurring you into action. And then there are moments when it is equally overpowering and you need to try and create a space for yourself that is away from all that. Our work has managed to reflect both reactions – half an album might be political and the other half about escaping from it.

You have said that your last album, ″Ibn al-Leil″ was the most poppy, yet isn′t it also the most political one, addressing a series of global issues – such as your song about the checkpoints in Beirut?

Sinno: Even in Lebanon, the song about the checkpoints is not particularly universal. It is about checkpoints in a specific neighbourhood plagued by sectarianism which necessarily have political significance for the people passing through them. But it′s all about how you address certain topics. That has always been our approach. That particular song, for example, was a real hit in Cairo and in Palestine because they have checkpoints. When you write about the power struggle between those in a uniform and civilians, it is essentially universal. The universality of an issue has nothing to do with its location.

We are developing our skills, our techniques, our ability to present things differently using lyrics and music. When we were younger we didn′t really appreciate what goes on inside us. This album is really about that. Maybe it′s more universal because it′s more emotional. The topics may be more universal, but the writing itself was far more intimate.

What are your goals for the future?

Sinno: We want to go on making music for as long as possible. The musicians we idolise most are those who have managed to have careers spanning decades. It would also be great at some point to stop being regarded as a world music band and start being seen as an indie band that happens to make music in Arabic. We don′t make world music. The notion of world music assumes that everything that comes out of anywhere other than Europe or North America is other. Like ″This is who we are, everything else is the rest of the world″. I find that problematic.

People also make assumptions about what Arabs are. We get invited to festivals and are asked to play in tents decorated with ″magic carpets″! Given the fact that we are from Lebanon, our catering requirements are always assumed to be kebabs and – I′m sorry to say – really bad hummus. It′s actually quite offensive. What they′re saying is, you′ve come here in your capacity as a musician but we′re going to treat you in your capacity as an Arab. Like ″we′ve taken them out of their cage; we′d better make it look like a forest″. We know this is done in good faith and they are only trying to be kind. We don′t blame the people who organise the festivals. It is a bigger problem of representation; what the media has taught people what Arabs are. We like to explore food just like everyone else.

Tourists have been returning to Tunisia, Egypt and Morocco. But, given the global uncertainty caused by the Ukraine war, will the comeback be enough to save a struggling sector, ... END_OF_DOCUMENT_TOKEN_TO_BE_REPLACED

In this essay, renowned Lebanese journalist and writer Hazem Saghieh asks whether the Arab Levant, which stretches from Iraq in the east to Egypt in the west, will remain an ... END_OF_DOCUMENT_TOKEN_TO_BE_REPLACED

By 2050, the Middle East and North Africa could be dealing with many more elderly people suffering from dementia. A lack of facilities, specialists and local knowledge means the ... END_OF_DOCUMENT_TOKEN_TO_BE_REPLACED

With his fist bump greeting for a man he previously called a pariah, US President Biden has paved the way for Saudi Crown Prince Mohammed bin Salman's return to the international ... END_OF_DOCUMENT_TOKEN_TO_BE_REPLACED
Author:
Ceyda Nurtsch
Date:
Mail:
Send via mail

END_OF_DOCUMENT_TOKEN_TO_BE_REPLACED
Social media
and networks
Subscribe to our
newsletter