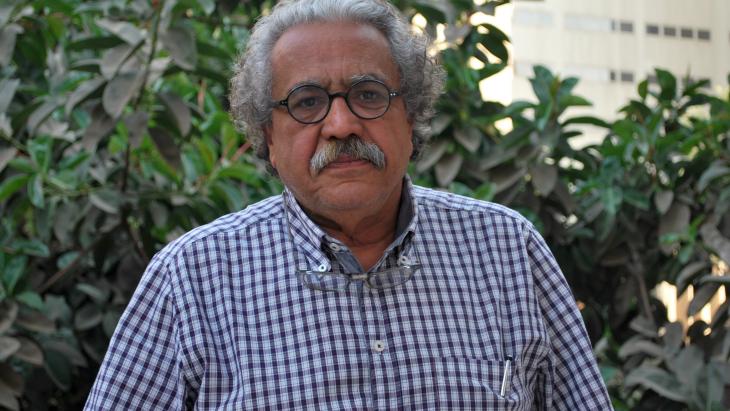 In this interview with Andrea Backhaus, the renowned Egyptian journalist and political scientist Hani Shukrallah criticises the way the Egyptian military is using the media to its own political ends and the blatant opportunism of many of the country's journalists

Mr Shukrallah, foreign journalists are being persecuted and ill-treated by members of the security forces. The state media have all been made to toe the line and are incessantly singing the praises of the army and its heroic deeds. It must be enough to drive a good journalist insane.

Hani Shukrallah: I have not slept properly for a month. I am standing in front of my life's work and thinking that it was all in vain. Since the overthrow of Morsi, there has been no respectable media outlet in this country. It's all pure propaganda. It's a disaster.

The radio is playing military marches; the newspapers are showing pictures of Islamists in handcuffs on the front pages; banners reading "Egypt's War on Terror" appear on television shows ...

Shukrallah: It's opium for the people. With all of this, the military is bending the people to its will. They never showed us who was sitting in the protest camps of Morsi's supporters. I'm certain that they weren't all mad preachers of hate. Instead, we were just bombarded by vitriolic comments about Islamist terror. One thing is certain: all sides have failed. Neither the Western nor the Egyptian media have succeeded in capturing the complexity of the situation. They report as if the situation was clear-cut, black and white. They are really advancing the polarisation of the country. 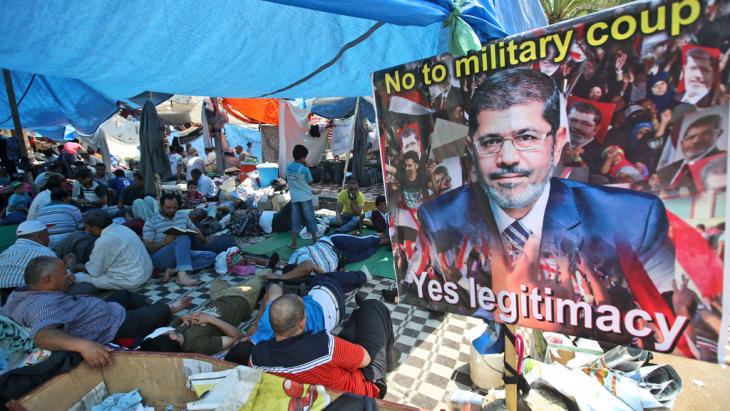 Distorted media images and crude portrayals of the enemy: "They never showed us who was sitting in the protest camps of Morsi's supporters. I'm certain that they weren't all mad preachers of hate. Instead, we were just bombarded by vitriolic comments about Islamist terror," says Hani Shukrallah

Many Egyptians accuse Western journalists of siding with the Muslim Brotherhood.

Shukrallah: The Western view of the Arab world is still shaped by prejudices. Since the Islamic Revolution in Iran, many intellectuals have viewed Muslims as a deviation from the norm. They say that Muslims rejected democracy and the liberal market economy. They are convinced that this is why there can be only two systems for the Arabs: a secular police state or an Islamic democracy. Autocrats like Mubarak and Ben Ali really milked this for all it was worth. They presented themselves as the bulwark against radical Islamism. The Muslim Brotherhood also capitalised on the West's fear of terrorism.

Shukrallah: After the Arab Spring, the West was all too willing to see the Muslim Brotherhood as standing for moderate Islamism. Morsi had enough rhetorical talent to let the West know: we share your values. When he mediated between all sides during the Gaza crisis in 2012, he was celebrated as the messiah. The West hoped that he and the moderate members of the Muslim Brotherhood would be able to keep the radicals in check. They were willing to ignore the fact that Morsi was basically breaking every rule in the democratic book.

And therefore the West should just ignore the army crackdown now? Hundreds of people were killed when the protest camps of Morsi supporters were cleared.

Shukrallah: Of course the criticism of the army leadership is right. But after 30 June, the reporters quickly forgot that millions of Egyptians had taken to the streets to protest against the Islamists. They are acting as if the rebellion movement never happened.

Almost all of the Islamist leaders are now behind bars. With such a hunt for the former rulers in full swing, can the country possibly settle down?

Shukrallah: No. Many observers fear that this agitation will bring the Islamists back to their terrorist roots, and I think that fear is justified. The Muslim Brotherhood is popular. Its supporters are willing to die for their convictions. I hate the ideology of the Muslim Brotherhood, but they have to be integrated into these processes. Repression breeds repression. History has shown us that over and over again.

The Egyptian media is really celebrating this hunt; they are glorifying the army and demonising the Islamists.

Shukrallah: They are painting a crude portrait of the enemy. It is reminiscent of the kind of images used by the American media after 9/11: the stars and stripes flying in the background, the "War on terror" at the bottom of the screen on every programme. There too, it all led to a completely exaggerated form of nationalism. Now, in Egypt, Mubarak's henchmen are drumming up a discourse of hysteria. They want to re-write the history of the revolution. 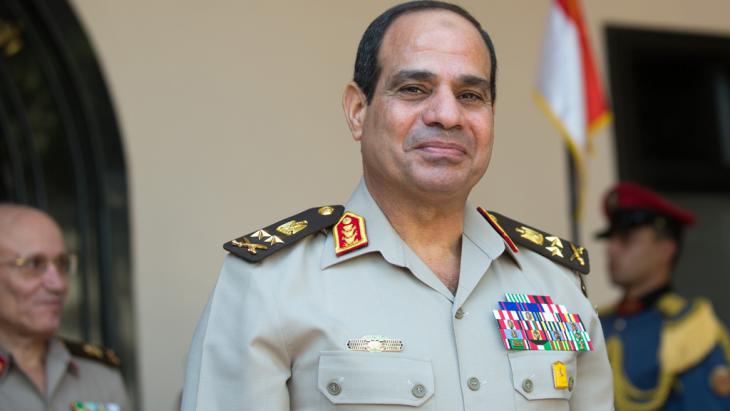 Egypt's vice-president and defence minister General Abdel Fattah al-Sisi is making sure that all Egyptian media are singing the same pro-military, anti-Islamist tune and that any journalists who are critical of the current regime remain silent

It is nothing new for the army to deal harshly with its critics. When they were in power after Mubarak was overthrown, journalists were put under pressure and countless bloggers were prosecuted.

Shukrallah: The media in Egypt have never been free. They are not there to provide information but to mobilise the masses. They are propaganda machines.

And the journalists see themselves as the mouthpiece of those in power?

Shukrallah: They see themselves as the servants of power. In the case of the major newspapers such as Al-Ahram or Al-Masry Al-Youm, many people who held senior posts were silenced by the new system and are now being made editors-in-chief again. Often entire editorial teams switch their political allegiances overnight. I know so many of these journalists.

Can you give us an example?

Shukrallah: One colleague was very closely linked to the security apparatus under Mubarak. When the protests in Tahrir Square began, he described the demonstrators as a drug-addled, sex-obsessed, communist plague that had to be fought. Once Mubarak was overthrown, he wrote commentary pieces praising the magnificent young people. He used headlines like "Egypt: behold the victors". Then, when the Muslim Brotherhood came to power, he stood up in editorial meetings and sang sura from the Koran. Most journalists are like him.

For many years, you were a senior editor of a newspaper close to the state. How can you bear the fact that everyone is toeing the line in this way?

Shukrallah: I can't. That's why I was fired twice. First in 2005 by Mubarak's secret service. I was editor-in-chief of Al-Ahram Weekly, the English print edition, at the time. I always insisted that we write about issues like human rights and repression, even if these themes were not being tackled by the mother newspaper. In February, I was thrown out by the Muslim Brotherhood. They made sweeping changes in our team. 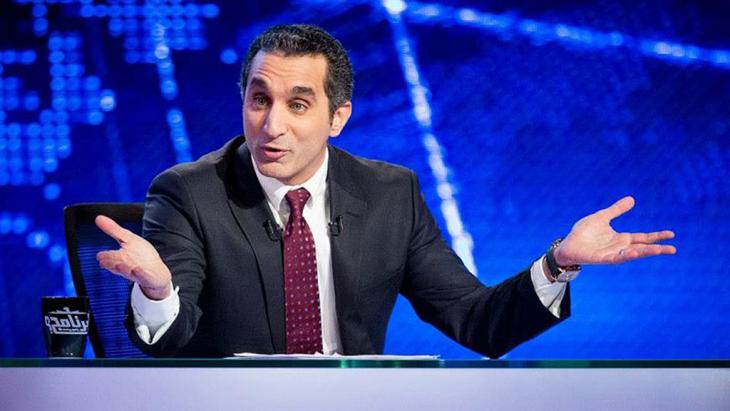 Extreme polarisation and hatred: critics like the satirist Bassem Youssef tried to push political boundaries when Morsi was in power. But the atmosphere in the country has since changed dramatically, and Youssef and other critical presenters have disappeared from Egypt's television screens

But the public didn't protest at this.

Shukrallah: No, and that's frustrating. Egypt lacks everything that makes freedom of speech possible: education, equipment, knowledge. I always say to my students: get out there and allow yourselves to be surprised. Don't just confirm your pre-prepared theories. They rarely understand what I'm trying to say. How can they? The Egyptians have no experience of a media that works within democratic structures.

Does this explain the will to self-censorship?

Shukrallah: There is no tradition of ethical standards in Egypt. For the media, this means that it is the message that counts, not the way you put it across. This culture of mobilisation becomes a threat to public order in times of war. When that happens, there is only good or evil.

Shukrallah: Yes. The few warning voices that do exist are being drowned out. Under the Muslim Brotherhood, some private broadcasters tried out an alternative. Critics like the satirist Bassem Youssef tried to push the boundaries a little. Now, however, the atmosphere is one of extreme hatred. Youssef and other critical presenters have disappeared.

Have they gone into hiding because they fear reprisals?

Shukrallah: No one knows. Perhaps they just gave up because they didn't want to work in a dictatorship of opinion. Maybe the editors-in-chief drove them out. The pressure from the public is enormous. If I use Facebook to denounce the fact that the police have so much power, people respond by saying that I am a member of a terrorist organisation. It's laughable. But not everyone is able to withstand this pressure.

The elected president, Morsi, is now in prison; the overthrown despot, Mubarak, has been released from prison; the military rules with an iron fist. Is Egypt moving towards democracy?

Shukrallah: Yes. And we face difficult times ahead. But I believe in the young people. They have got rid of two autocrats and swept military rule aside. They won't let their revolution be taken away from them. They have the Internet. That is their best weapon.

Hani Shukrallah, born in Cairo in 1950, is a political scientist and one of Egypt's foremost journalists. From 2003 to 2005, he was editor in chief of Al-Ahram Weekly, which was close to the state and one of the most important English-language newspapers in the Arab world. He was later editor-in-chief of the corresponding daily newspaper and the English website. In February 2013, Shukrallah was dismissed on the instructions of the Muslim Brotherhood.

Recep Tayyip Erdogan, disappointed by the European Union’s reluctance to integrate Turkey into its ranks, has re-directed his country’s diplomacy toward the Maghreb and Africa to ... END_OF_DOCUMENT_TOKEN_TO_BE_REPLACED

The Egyptian series "El-Ekhteyar 2" was created by a production company with close ties to the military – and pursues a corresponding narrative. Moritz Baumstieger explains how ... END_OF_DOCUMENT_TOKEN_TO_BE_REPLACED

Looking to mobilise the Egyptians, Abdul Fattah al-Sisi and his ministers will refer to them as the "people". As soon as the Egyptians demand something of the state, however, they ... END_OF_DOCUMENT_TOKEN_TO_BE_REPLACED

The rollout of coronavirus vaccines in the Middle East and North Africa is already taking place on a massive scale, with the United Arab Emirates leading the way. Nevertheless, ... END_OF_DOCUMENT_TOKEN_TO_BE_REPLACED

Egyptian singer Umm Kulthum continuous to be an icon, almost 100 years after she published her first record. But what about the other famous women of the 1920s? In his new book, ... END_OF_DOCUMENT_TOKEN_TO_BE_REPLACED
Author:
Andrea Backhaus
Date:
Mail:
Send via mail

END_OF_DOCUMENT_TOKEN_TO_BE_REPLACED
Social media
and networks
Subscribe to our
newsletter