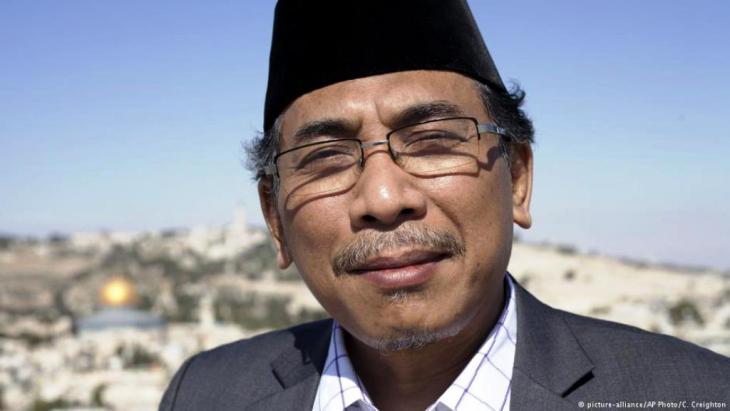 Yahya Cholil Staquf is a prominent Muslim cleric and secretary-general of the world's largest Islamic organisation, Indonesia's Nahdlatul Ulama (NU), which has 60 million members. After visiting Israel and meeting with PM Netanyahu, he was heavily criticised at home. In this interview, conducted by Rizki Nugraha, he explains that his agenda was to approach peace movements and to strengthen the aspirations for peace within Israeli society

Earlier this month, Yahya Cholil Staquf was invited to take part in a discussion on interreligious dialogue and the state of relations between Islam and Judaism at the Global Forum of the American Jewish Committee (AJC) in Jerusalem.

After his visit, Staquf was met by a wave of criticism for advocating dialogue with Israel and meeting with Israeli Prime Minister Benjamin Netanyahu. Staquf said he took advantage of the meeting to deliver a message of peace.

Indonesia, with the world's largest Muslim-majority population, does not have diplomatic relations with Israel, and many Indonesians support the cause of the Palestinians.

There has also been tension recently between Israel and Indonesia. Israel has decided to deny entry to Indonesian passport holders, possibly in retaliation for Jakarta's alleged decision to bar entry to Israelis in response to the ongoing violence in Gaza.

In this interview, Staquf explains that the goal of Indonesia and the NU is to promote world peace. According to Staquf, religious morality is an important element in the peace process.

What was your impression of Prime Minster Benjamin Netanyahu?

Yahya Cholil Staquf: He spoke about a desire to normalise relations with Indonesia. Although I am not speaking on behalf of the Indonesian government, in my opinion, looking at the present situation, relations between Indonesia and Israel can't be separated from the Palestinian issue. So, it is difficult to expect normalisation between Indonesia and Israel, as long as there is still no solution for the Palestinian problem.

Do you feel Netanyahu took advantage of your presence in calling an impromptu meeting?

Staquf: Yes, but it was reasonable for him to make use of it. I can also take advantage of him. For example, I can use the leverage of that meeting to reinforce the messages I want to convey.

However, if he wants to take advantage of my presence, what exactly are the benefits that can be obtained? I have affirmed many times that I am not a government delegate, nor a messenger of the NU. Therefore, he cannot claim to have the support of Indonesia, nor can he claim NU's support. There is no diplomatic advantage. If the [Indonesian] government still does not want to open diplomatic relations with Israel, he can't do anything.

What was the mission that brought you to Israel?

Staquf: I received an invitation from the American Jewish Committee (AJC) to give a presentation at their forum. It was similar to the invitation that the late Indonesian leader Gus Dur had received 16 years ago. So at the AJC forum, I was presented in the same frame of dialogue as Gus Dur was.

What message do you want to convey there?

Staquf: I ask clerics from all religions to think about what solutions religion can offer to various conflicts that are engulfing the world today. Religion is often used as a justification and even a weapon for conflict. Is religion really just for this or does it offer a solution?

Can Islam inspire peace between Israelis and Palestinians?

Staquf: Maybe, as long as Islamic thinkers are willing to re-contextualise. Why is Islam functioning as the justification for conflict today? It is the fruit of an Islamic interpretation coming from the Middle Ages. If Islam wants to function more constructively in the present age, there must be contextual adjustment, because reality has fundamentally changed.

So if the mindset of the past is forced, it will certainly cause problems. And Muslims must be aware that conflict will continue to prevail if we are not willing to change our mindset. 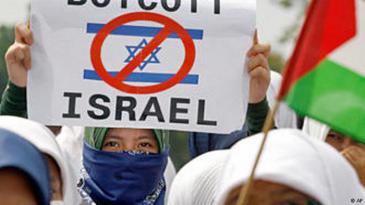 Working for dialogue: although criticised in Indonesia for his willingness to talk to senior Israeli politicians, Yahya Cholil Staquf sees such meetings as an opportunity to send out a message of peace in times of confrontation

Is it possible to re-contextualize the Islamic interpretation in relation to the conflict with Israel?

Staquf: I can say it is likely, because religious interpretation is very diverse. If we look at the history of Islamic thought, at the beginning of the era when Islam came in contact with the civilization of Persia, the interpretation of Islam at that time was very diverse.

But as the established political system was founded, there was a confirmation of interpretation. This is what legitimises the existing political system. Actually if we refer to the former exegesis, I am sure there must be a reference that we can use to understand the present reality with a more constructive point of view.

How is dialogue possible, especially in the midst of recent escalation?

Staquf: First, we must want peace. That's it. Do we want to keep fighting until everything is destroyed or do we want peace? If you choose peace, then there should be dialogue. But dialogue alone is not enough. Dialogue must be accompanied by social movements, so that aspirations for peace become consensus at the community level. Then political leaders will build policies based on the aspirations of peace.

Why has the national discourse in Indonesia on the Palestinian issue not been able to produce a consensus of peace?

We need to develop a discourse on what the Palestinians really need. How they can get a chance to build their own future. This discourse should be developed in Indonesia. It's not about defending Palestine and against Israel or America. Unfortunately, though, current thought does not offer any solution other than destruction.

With its traditions of neutrality and non-alignment, Indonesia has had to tiptoe around the Ukraine war debate. Pro-Russia sentiment in the region complicates Jakarta's foreign ... END_OF_DOCUMENT_TOKEN_TO_BE_REPLACED

Calls for an environmentally-conscious form of Islam are growing in Indonesia, as climate change poses enormous ecological challenges for the country. Experts say it could change ... END_OF_DOCUMENT_TOKEN_TO_BE_REPLACED

Indonesia has become a primary battleground between democratic and autocratic visions of Islam in the 21st century, with Nahdlatul Ulama pitted against Abdullah bin Bayyah, a ... END_OF_DOCUMENT_TOKEN_TO_BE_REPLACED

Research project "The Global Qur'an", brainchild of Professor of Islamic Studies Johanna Pink and sponsored by the European Research Council, analyses the history and ... END_OF_DOCUMENT_TOKEN_TO_BE_REPLACED

At a time when even some rich democracies are electing con men as their political leaders, the success of Indonesian President Joko Widodo deserves wider acclaim and appreciation ... END_OF_DOCUMENT_TOKEN_TO_BE_REPLACED

Comments for this article: "We must want peace"

He is wrong. One cannot have because they want it. The balance of forces locally, regionally and internationally determines when and how peace is achieved. Look at the destruction in Syria, after 7 years of war the balance of forces has titled towards the regime and we can see a sort of "peace" might happen.
He is wrong in meeting with Netanyahu for "peace". This is not a leadership that one should talk to.

END_OF_DOCUMENT_TOKEN_TO_BE_REPLACED
Social media
and networks
Subscribe to our
newsletter