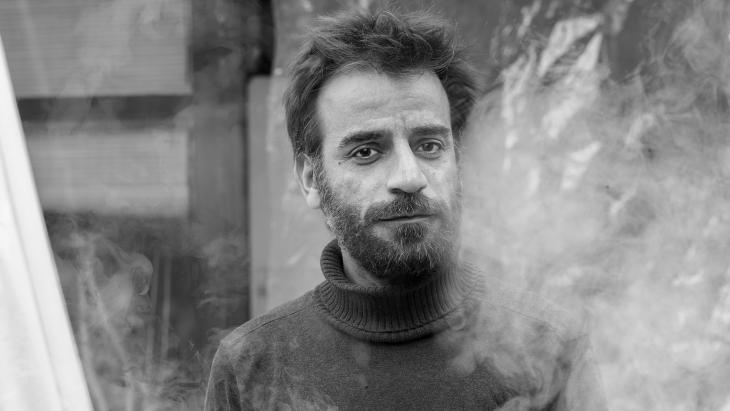 In August 1978, four men set fire to the Cinema Rex in the Iranian city of Abadan, killing more than four hundred people inside. The event is said to have started the Iranian Revolution to overthrow the Shah's regime. Forty years later, "Careless Crime" by Iranian filmmaker Shahram Mokri depicts four men planning to burn down a cinema in a contemporary Iran where ghosts of the past haunt the current society. Interview by Schayan Riaz

I have to admit I wasn't aware of the "Crime of Cinema Rex", even though it's such a well-documented event and is viewed as one of the triggers of the Islamic Revolution. Do you think that's because tragedies that happen in the Middle East aren't as prevalent in people's consciousness in the West?

Shahram Mokri: It doesn't surprise me that the crime of Cinema Rex has been forgotten. Just bear in mind the pace with which news emerges from the Middle East – and especially from Iran – over the last 40 years. We've had the revolution, the occupation of the US embassy, political assassinations, the war between Iran and Iraq, the death of several presidents and prime ministers, and the overthrow of several governments. There's simply no space left for news that is older than these events. But I agree with you that the way of looking at history and events is different in Iran and in the West.

Was "Careless Crime" a way for you to make more people aware about what happened in the late 70s?

Mokri: Not for Iranian audiences. The story of Cinema Rex is quite familiar to them. Even to the younger generation born after 2000 – they all know the story. Every year, as the anniversary of the crime approaches, people still debate who ordered the burning of Cinema Rex. Due to its political nature, no film has been made about it for years. "Careless Crime" is the first feature film to address it. But this film doesn't aim to remind people of the event. There has been enough analysis about it already.

In the film it is said that the motive of the crime wasn't to hurt anyone, it wasn’t to cause any deaths. How do you, especially now in hindsight, interpret the Crime of Cinema Rex, where about 470 people lost their lives after all?

Mokri: There is a famous saying in Iran – we say it jokingly, but it's actually true: "We are lucky to be alive today". I think there is a lot of good luck associated with being alive in the Middle East. Of course, this is probably the case anywhere, but in the Middle East it takes on another meaning. Just look at this year's explosion in Beirut, for instance. What happened in Lebanon is similar to the Crime of Cinema Rex, in that no one really knows who was responsible for such carelessness. Perhaps no one wanted to destroy half of Beirut, but on closer examination, we see how everyone is responsible to some extent.

Time is an important element in your film. Or the theme of "old vs. young", which runs through the entire narrative. Why is that important to you?

What is the status of cinema that pre-dates the Islamic Revolution compared with contemporary Iranian cinema? Do older films still play a role in society?

Mokri: The interesting thing about the history of Iran is that the Iranian revolution has created a clear cut between films made before and after. Society was moving towards modernism and the West and then suddenly changed its course and went back to tradition and religion. Obviously, that changed the shape and appearance of everything. By watching old movies made before the revolution, the current young generation is able to see and understand what society was like. Its significance is more than purely cinematic, it is historical.

What is it like to be a filmmaker in Iran today, especially making such politically charged films as yours? How challenging is it to make films that present systemic or societal issues such as the ones addressed in "Careless Crime"?

Mokri: There are two sides to filmmaking in Iran. On the one hand, there is an unrivalled market for Iranian films in Iran. Only Iranian films are shown in Iranian cinemas. The production of films in Iran is therefore not as complicated or as long as it might be in Europe, for example. On the other hand, Iranian filmmakers continually protest and complain about facing censorship. Everything in Iran is interpreted politically and that makes filmmaking difficult. Now, if a film really is about a political issue, you can imagine how hard things can be. You need a licence from the Censorship Office before you can film and before you can screen. Even if you accept the existence of censorship, the bigger problem is that no one knows exactly what is forbidden and what isn't. Politics is such an important issue and it affects each family and each individual. Obviously, it affects us as filmmakers too.

You have been called a "genre-smashing" filmmaker in the press. How do you view this term?

Mokri: My father loved cinema in the classic sense. He would collect photos of famous actors. And I think I first understood the nature of cinema when I watched the opening scenes of John Houston's "Moby Dick". My father has told me that this memory cannot be true, since I was too young to remember the film, but there is no doubt in my mind that I saw it. I also got to see "Star Wars" and that kind of cinema really fascinated me. In fact, in a survey for an Iranian movie magazine I listed "Star Wars" as my favourite film. I confess that my interest in cinema is very clichéd. I began by watching genre films. I'm a classic cinephile.

Since Ali Khamenei, Iran's most powerful man, has openly and unconditionally come out in support of Putin's war in Ukraine, logistical help is on its way, with an allegedly ... END_OF_DOCUMENT_TOKEN_TO_BE_REPLACED

A sci-fi film lampooning the Islamic Republic and all that its regime holds sacred premiered quietly at a nondescript venue in Los Angeles in July. The title, “Velayatnameh”, is a ... END_OF_DOCUMENT_TOKEN_TO_BE_REPLACED

The Palestinian militant organisation Hamas, with Hezbollah's help, is building up a military presence in Lebanon, the ultimate consequences of which could be devastating, writes ... END_OF_DOCUMENT_TOKEN_TO_BE_REPLACED

With his fist bump greeting for a man he previously called a pariah, US President Biden has paved the way for Saudi Crown Prince Mohammed bin Salman's return to the international ... END_OF_DOCUMENT_TOKEN_TO_BE_REPLACED

Days of protests across Iran followed the collapse of a high-rise building in the city of Abadan in May 2022. But why has the disaster become such a political issue? Rahman ... END_OF_DOCUMENT_TOKEN_TO_BE_REPLACED

Millions in Idlib depend on aid coming through a northern border crossing. On 10 July, the UN Security Council votes whether to keep it open. The decision may hinge not only on ... END_OF_DOCUMENT_TOKEN_TO_BE_REPLACED
Author:
Schayan Riaz
Date:
Mail:
Send via mail

END_OF_DOCUMENT_TOKEN_TO_BE_REPLACED
Social media
and networks
Subscribe to our
newsletter