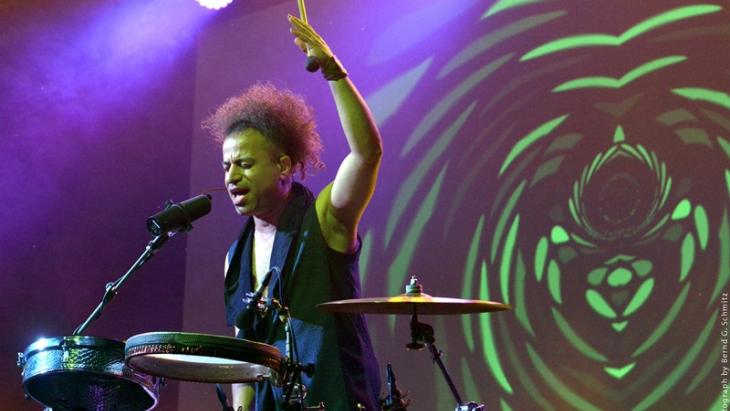 Percussionist Habib Meftah has made an international name for himself with clubbable, acoustically altered folk music. But he also works with dancers and musicians from other genres. His versatility is based on the traditional musical culture of his southern Iranian origins. Interview by Bernd G. Schmitz

Your full name is Habib Meftah Boushehri – what does the last part mean?

Habib Meftah: It refers to my origins in the southern Iranian town of Bushehr, and thatʹs the name in my passport. But I havenʹt used that part of my name, as an artist, for a few years now. "Habib Meftah" on its own is catchier.

When did you start making music?

Meftah: At the age of ten. It wasnʹt easy for my family because I wanted to play traditional music. With a beginner, that doesnʹt sound as nice as classical Iranian music. My first instrument was the dammam, a drum with goatskins on either side, worn across the body. I was familiar with it from religious ceremonies in the mosque.

Why werenʹt you interested in the tombak or the daf, the central percussion instruments in Persian music?

Meftah: They werenʹt very widespread in Bushehr. The technique for playing them is also completely different than that used for southern Iranian percussion instruments. They were what fascinated me the most, from the very beginning – although I do like listening to a good tombak player.

What was your musical education like? Did you go to an ostad, a master like in Iranʹs classical music world?

Meftah: No, that kind of thing wasnʹt usual where Iʹm from. I drank music in through my heart, as they say. I just listened to and watched the older men playing – and didnʹt ask anything.

Meftah: The sounds have a lot of very different roots. Two hundred years ago, Arabs from the Gulf region and Indians came to the south, along with black slaves from Africa. Thatʹs why we play different music there, eat different food and look different to other Iranians. When Iʹm abroad, many people refuse to believe Iʹm Iranian – partly because of my Arabic name. Habib means "beloved", Meftah means "key".

How did your musical development progress into adulthood?

Meftah: I soon realised I wanted nothing else in life than to be a percussionist. But not with a large orchestra – because of the organising and all the other things that are part of that life. Iʹm not the right type of person. My musical development eventually took me to the duo Iʹm now in, with my colleague Nicolas Lacoummette. Heʹs been working with me as a sound designer for five years now; Zak Cammoun is our sound engineer.

Youʹve been living in Paris since 2001; you canʹt go back to Iran. Whatʹs behind that?

Meftah: I was 23 when I moved to France. The Compagnie Montalvo-Hervieu had invited me and my colleague, the ney-anban player Saeid Shanbehzadeh, to work on a dance project with them. We had a four-year contract for about 180 shows a year. After that my wife and I went back to Iran, partly to bring out a new album. That was at the start of Mahmud Ahmadinejadʹs presidency. It was a time when the Basij militia was gaining influence and wanted to show off its power. And the dance show sealed my fate – it had been shown on ARTE and French television. The problem was exacerbated because Iʹd accompanied a woman singer in the show who sang a Baroque religious song.

That can only have been Christian music – is that a problem for the religious guards in Iran?

Meftah: The key factor was that Iʹd accompanied a woman singer in the first place and worked on the dance project; dancing is banned in Iran, of course. But I didnʹt know any of that when ten or twelve Basiji surrounded me on the street, hurled insults at me and then locked me in a small room for three days. I felt like a terrorist. When they released me they confiscated my passport. With my lawyerʹs support, I spent three years fighting to get it back, and to leave for France again. I wasnʹt allowed to work during that time. They were really tough years for me.

Back in France, you then worked with Saeid Shanbehzadeh again – very successfully, for a total of 17 years. Why did you part ways in 2014?

Meftah: In the end, it was like in some marriages. After a while youʹre tired and you realise that enough is enough. Our ideas of music ended up very different. Once Iʹd made the separation I noticed how much good it did me. So I donʹt think weʹll share a stage again in future.

There are a few videos on YouTube of you working with the oud player Shahram Gholami. Your part is quite scaled back – how do you feel in that role?

Meftah: I like that too, actually. So Shahram and I recorded a CD together in my Paris studio at the end of 2012. It was a lot of fun – also because our little project was so different to my usual work. 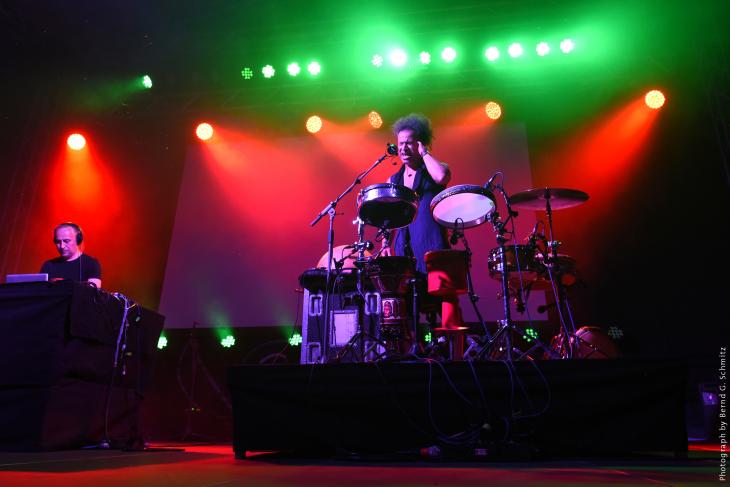 Self-taught sound artist: "my music is all hand-made. The foundation of my work is traditional southern Iranian music from Abadan, Bandar Abbas, Bushehr and other places. Iʹd like to put it in contemporary clothing so that people who arenʹt normally interested in traditional sounds listen to it," says Habib Meftah

That collaboration led to problems too…

Meftah: After Shahram returned to Iran to release the album there, the Ministry of Culture and Islamic Guidance (Ershad) informed him it couldnʹt be released if my name was mentioned on the CD. So it seemed like we couldnʹt bring it out. But then Shahram found a solution after all: instead of "Habib Meftah" he had "Dey Zang Roo" printed on the CD. "Deyzangeroo" was the name of my first solo album, from 2005. Since then, the title has become a kind of pseudonym, by which a lot of music fans know me. That seemed not to be the case at the ministry, which did give permission to publish the CD in the end.

What would you call the music youʹre making at the moment? Some people use the term "electrofolk".

Meftah: I donʹt use that name for it. A lot of people would think it meant electronic music. But my music is all hand-made. The foundation of my work is traditional southern Iranian music from Abadan, Bandar Abbas, Bushehr and other places. Iʹd like to put it in contemporary clothing so that people who arenʹt normally interested in traditional sounds listen to it. I simply play folk music with its sound adapted to the present day.

Your new concert programme is called "Shibaali". Whatʹs it all about?

Meftah: Itʹs a kind of musical diary of my life. Iʹve worked with impressions from my childhood and youth and my adulthood. For example, when I came home from school at noon, as a child, my grandmother would often surprise me with a little present, a coin or a sweet. These things were always hidden under a thin white scarf, which older women in southern Iran still use to cover themselves. And "Shibaali", the title of the project, means "underneath the clothing" in our language. The idea is to produce lots of little surprises for the audience as the concert goes on – just like my grandmother did in our garden.

Home
Print
Newsletter
More on this topic
Iranian Tombak Virtuoso Mohammad Reza Mortazavi: Flying fingersranian singers Mahsa & Marjan Vahdat and the American Kronos Quartet: Beyond the dividing linesInterview with Ramin Sadighi from the Iranian music label Hermes Records: The fine line between what is permitted and what is not
Related Topics
Free speech and censorship, Iranian music, Minorities in the Muslim world, Musical worlds
All Topics

Having seen a sharp decline in its influence in Tunisia and Algeria, France is eyeing China and Spain’s growing economic presence in Morocco with concern. Is Paris about to lose ... END_OF_DOCUMENT_TOKEN_TO_BE_REPLACED

With "Assad or We Burn the Country", Sam Dagher has furnished the world with some genuine ammunition against the Syrian regime's on-going campaign of disinformation. The only ... END_OF_DOCUMENT_TOKEN_TO_BE_REPLACED

Islamist attacks such as those that took place in Paris this last autumn evidence a new kind of perpetrator. In place of individual terror organisations, networks appear to have ... END_OF_DOCUMENT_TOKEN_TO_BE_REPLACED

Decades of oil exports have completely destabilised culture and politics in the Middle East. Speaking with Lena Bopp, the renowned writer Amin Maalouf says that the distorted ... END_OF_DOCUMENT_TOKEN_TO_BE_REPLACED

France is locked in a row over Islam, Islamophobia and the headscarf. But one key voice is almost completely missing from the debate – that of the women who wear the veil. By ... END_OF_DOCUMENT_TOKEN_TO_BE_REPLACED
Author:
Bernd G. Schmitz
Date:
Mail:
Send via mail