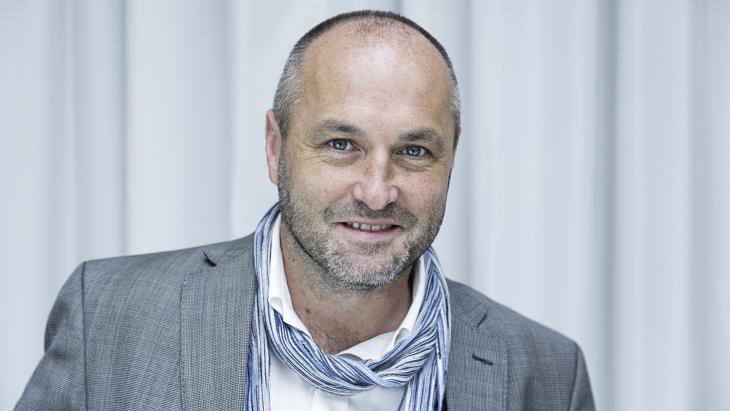 Israeli Rami Elhanan’s daughter Smadar was killed by a Palestinian suicide bomber in 1997, Palestinian Bassam Aramin’s daughter Abir was shot in the head ten years later by Israeli border police. Irish author Colum McCann takes the lives of these two men as a starting point to tell a story of war, friendship, grief and hope. Interview by Schayan Riaz

Mr McCann, when did you first come across Rami and Bassam and their life stories?

Colum McCann: Five years ago I went to Israel and Palestine with two non-profits, “Narrative 4” and “Telos”. There was a big group of us, artists and activists, and it was a whirlwind trip, but we got to visit several different people – Palestinian musicians, Israeli writers, settlers, soldiers, artists, security experts.

It was an incredible trip, brilliantly curated and deeply nuanced. And on my second to last night we went to the town of Beit Jala, just outside of Jerusalem. We walked into this little office, up a rickety flight of stairs. These two men were sitting there and they introduced themselves as Rami and Bassam. They seemed to me like ordinary men in an ordinary place.

And then they began to tell me about their daughters, Smadar and Abir, both of them lost in the conflict. I have to tell you; they pinched every ounce of oxygen from the air. It seemed to me like it was the first time they had ever told the story. Of course it wasn’t, they had told it hundreds of times before. But I was deeply moved and forever changed.

How did you broach the subject to them that you were planning to write a book about their lives?

McCann: I simply told them and they were okay with it – they are used to media attention. But I said to them, no, maybe you don’t understand, I want to write a novel about you. I’m a fiction writer. They said, “You can write whatever you want.” I don’t think they quite knew what I was going to do. But they trusted me.

At first, I was terrified at the prospect of taking it on. I mean, I’m Irish, I live in New York, and I had hardly ever been to that part of the world. How can a writer get in under the nature of all this and capture the essence of what’s going on in the Middle East? I wanted to tell a story that anyone who knew nothing about the conflict could understand. 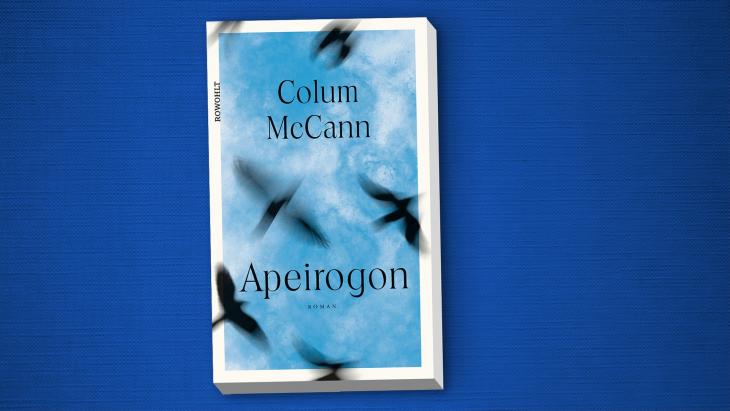 The Middle East conflict in all its history and complexity: Colum McCann's overwhelming novel "Apeirogon" makes the indescribable tangible in a sensitive and meaningful way. A kaleidoscopic text poses the timeless question: how do we go on living following the loss of a beloved? And how does one find peace? With oneself, with others

Was it important to you as a white man to avoid culturally appropriating this story?

McCann: That’s a great question, and one that is very much on my mind. Firstly, I have to say that cultural appropriation is very real. As writers and artists we often go to places we shouldn’t and quite often we condescend. We patronise. We steal. We mock. We take advantage. We don’t think.

We don’t recognise. We don’t stretch. We don’t see past our own noses. We sometimes even pat ourselves on the back for our supposed bravery, which is really just a form of boasting. So all this is quite patently wrong. If our intention is to take away from another culture, then it is wrong, plain and simple, and we deserve to be called out for it. And there are a lot of people who are calling it out. I don’t shrink from any of this stuff.

At the same time we should also be talking about cultural celebration, where we go in to learn, to share, to deepen, to shed light. That’s a different story, or maybe part of the same story. This is when we go in with humility. We go in with grace. We go somewhere because we know we are not full enough, or big enough, or bright enough. And we get kicked around a little by the truth. And we somehow come out the far end a little wiser and a little bruised. That’s what I felt I did with “Apeirogon” [Ed.: name for a geometric shape with an infinite number of sides, intended to symbolise the multitude of different perspectives relating to the conflict.] And the fact that Rami and Bassam support the book is an amazing thing.

I spent as much time as possible with them. I rode on Rami’s motorbike. I walked through checkpoints with Bassam. I had dinner with their families. They told me things that they had never told anyone else before. I wanted to get into their heads and their hearts to reveal the true nature of their courage. I think I celebrated Rami and Bassam – at least I hope I did.

At the core of Apeirogon are the two killings of Smadar and Abir, and how these reverberate right to the present day. While grief and loss are such universal topics, the loss of a child is an exceptionally heart-breaking tragedy. How did you approach this subject from a literary point of view?

McCann: I have three children, but I have never lost a child, thank heavens. But even writing this was difficult in the extreme. I had to put myself in their shoes. I just had to try to find the language. I had to access extreme parts of my head and my heart. It was physically demanding and mentally quite shattering at times.

Fiction and truth – a difficult relationship

And when writing about real life in general, be it about real characters or events, what is hardest to get right? How do you as a writer go about achieving truthfulness?

McCann: Ah, truth! And “truthiness”. And “fake news”. And “fiction”. And “non-fiction”. The relationship between fiction and truth has always been complicated, but is even more so nowadays. Where do we draw the line? I have said in other interviews that facts are mercenary things. They can be manipulated and shipped off to do whatever work you need them to do. But the deeper truth relies on the human heart – and the human heart is a messy and constantly evolving place. So I like to blend the real world with my imagination, in the hope that I can create something honest.

Your book has 1001 chapters, in allusion to the One Thousand and One Night folk tales. When did you decide on this structure?

McCann: I originally thought I would do it in fifty chapters, then maybe a hundred and then, about a year into the process, it struck me that Rami and Bassam were telling the stories of their daughters to keep them alive, sort of like Scheherazade, and I thought it has to be 1001. It was like a bolt of lightning for me. And then I thought I would like for the book to be read in two directions, so I have 500 chapters up and 500 chapters down, beginning and ending in chapter 1. But I’m not such a mathematician. It’s more like music to me.

You write about how the greatest sale of Israeli flags outside of Israel was in Northern Ireland in the 80s. In hindsight, did growing up in Ireland inform your view of the Israel-Palestine conflict in any way?

To quote a sentence from Apeirogon: "Peace was a moral inevitability. Neither side could keep the other from it." What, apart from Rami and Bassam, who are friends in real life and both committed to working for peace, gives you hope regarding the conflict?

McCann: Let’s face it, there’s not very much hope right now. But peace will come as a surprise. I think it will come from underneath. From ordinary people. Something random and something crowd-sourced.

Based in New York, Irish writer Colum McCann is considered one of the most important contemporary authors in the English language.

A leading light of Israeli theatre, Ofir Henig has directed the Israel Festival and is the only female director to have been awarded the Israel Theatre Prize. These days, however ... END_OF_DOCUMENT_TOKEN_TO_BE_REPLACED

With the current leadership of Iran quick to lay the blame for the Iran protests on Israel, the chances of harmonious relations between the two countries still seems remote. Yet, ... END_OF_DOCUMENT_TOKEN_TO_BE_REPLACED

Daniel Barenboim is not only a world-famous pianist and conductor. He has also worked tirelessly to foster understanding and reconciliation between Palestinians and Israelis. By ... END_OF_DOCUMENT_TOKEN_TO_BE_REPLACED

After a two-year hiatus, the Arab League re-convened at the beginning of November in Algiers against a backdrop of uncertainty and discord. By Pierre Boussel END_OF_DOCUMENT_TOKEN_TO_BE_REPLACED

On 1 November, elections are set to take place in Israel for the fifth time in four years. If Arab minority voters decide to stay home out of frustration at their divided parties ... END_OF_DOCUMENT_TOKEN_TO_BE_REPLACED
Author:
Schayan Riaz
Date:
Mail:
Send via mail

END_OF_DOCUMENT_TOKEN_TO_BE_REPLACED
Social media
and networks
Subscribe to our
newsletter