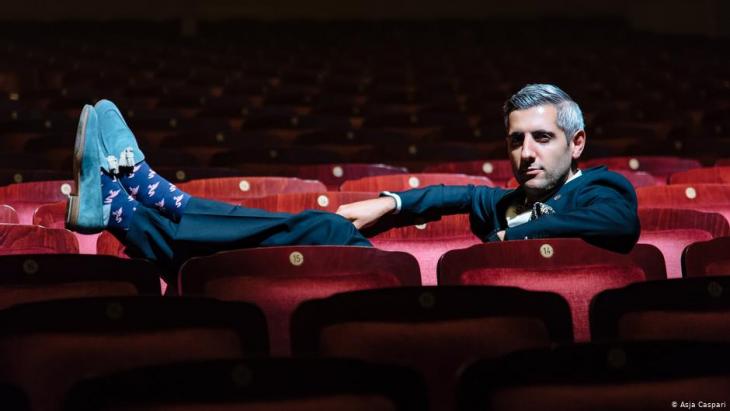 Journalist Michel Abdollahi was born in Tehran in 1981 and moved to Hamburg in 1986. His big breakthrough came with his television documentaries on social issues such as integration, racism and right-wing populism. He spoke to Qantara.de about his book "Deutschland schafft mich!" (Done away with by Germany – What happened when I found out I wasn't German after all)

Mr Abdollahi, in the media and in PR texts, you are often described as a "super model migrant". I find that a bit strange ...

Yes, it is strange. I struggle with that description. I mean, what is a "super model migrant"? Does that mean I eat traditional Bavarian sausages and sing along to Schlager music? Does that make me integrated? I am integrated when I believe in the system here in Germany. And even if I don't believe in the system, it should be enough that I abide by Germany's laws. It should make absolutely no difference what language I speak, what food I eat, what music I listen to and to whom I pray, as long as I enjoy working here, pay my taxes, and am part of society. But no, people with dark hair always have to go the extra mile. We have to be western. But what is "being western" anyway, and why is it worth aspiring to? Why isn't it worth aspiring to be "eastern"?

The issue of integration has been part of your life since your childhood, since you moved to Germany from Iran. What are your memories of that period of your life?

It is not as if I constantly experienced hostility. I had a wonderful childhood, a wonderful time at school, wonderful teachers and wonderful friends. But of course there were always a few people who showed me that I wasn't welcome here. Although there weren't very many such incidents, there were apparently enough of them to remain lodged in my memory. And I ask myself, why are those memories so vivid? Why don't I tend to remember the nicer things more? For example, during a geography lesson, a teacher once said to me that he had contacts in Amnesty International if I ever needed help. I just said "thank you", but to this day, my friends and I still talk about it, because we just found it so incredible at the time. What kind of help did he think I would need from Amnesty International?

You may also like: Halle, Christchurch… a network of "lone wolves"

This kind of everyday racism is still very prevalent in our society. Has nothing changed over time?

I am very happy to be Iranian, very happy to be a Muslim, very happy to be German. I am very happy to be all these things and it enriches my life. It enriches society. But apparently, it's not enough. If a politician is very well integrated and people then say that the country is not ready for a Federal Chancellor with a migrant background, then that's racism. When predominantly Green or left-wing voters in beautifully gentrified parts of a city look carefully to see whether there are enough Paulas and Alexanders in the local playschool rather than Murats or Ozgurs, that's racism too. Ali has a harder time than Alexander finding a flat. That's the reality.

We are experiencing an alarming lurch to the right in Germany, which you describe in detail in your book "Deutschland schafft mich". As a person with a migrant background myself, should I be worried about my future?

My aim is not to show that the lurch to the right only affects people with black hair or Muslims, but that it also affects people who are just standing up for what they believe in. There are numerous examples of violence against people who don't have any kind of migrant background at all. I tried to write all of this down in detail. But to get back to your question: five years ago, I didn't have the impression that people in Germany were worried about their health and their future. Now, however, many people seem to be just that. I find that quite astonishing.

Education for girls and women is still possible in Afghanistan, says Reinhard Eroes of the Kinderhilfe Afghanistan initiative. In interview with Elisa Rheinheimer, he talks about ... END_OF_DOCUMENT_TOKEN_TO_BE_REPLACED

In Doha, Arabs from Morocco, Tunisia, Egypt and Algeria are gathering to celebrate the first ever FIFA World Cup to be held on Arab soil. The criticism from Europe? Over the top, ... END_OF_DOCUMENT_TOKEN_TO_BE_REPLACED

Canan Topcu came from Turkey to Germany as a child. In her essay, she describes how bothered she was by the racism she encountered in her country of origin when she travelled ... END_OF_DOCUMENT_TOKEN_TO_BE_REPLACED

All organisers use major sporting events like this year’s FIFA World Cup in Qatar primarily to advertise their country and promote a slick public image. This is not something we ... END_OF_DOCUMENT_TOKEN_TO_BE_REPLACED

A leading light of Israeli theatre, Ofir Henig has directed the Israel Festival and is the only female director to have been awarded the Israel Theatre Prize. These days, however ... END_OF_DOCUMENT_TOKEN_TO_BE_REPLACED

Antoine Leiris lost his wife in the Islamist terrorist attack on the Bataclan club in Paris. German director Kilian Riedhof has made a film of his book "You will not have my hate ... END_OF_DOCUMENT_TOKEN_TO_BE_REPLACED
Author:
Schayan Riaz
Date:
Mail:
Send via mail

END_OF_DOCUMENT_TOKEN_TO_BE_REPLACED
Social media
and networks
Subscribe to our
newsletter