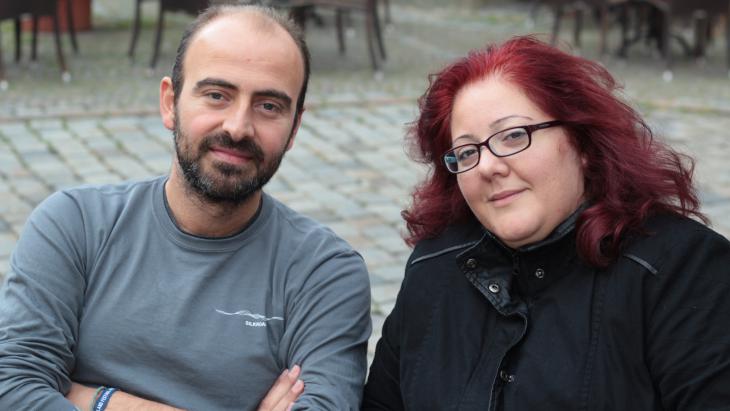 Clarinettist Kinan Azmeh and soprano Dima Orsho, friends since childhood, are two of the most talented musicians to emerge from the Damascus music scene. Marian Brehmer talked to the two Syrian musicians at the Morgenland Festival in Osnabruck about playing music in times of war and misery

You are both children of the Damascus music scene. How did you come to join the Morgenland Festival in Osnabruck?

Kinan Azmeh: I remember my first meeting with the festival organiser, Michael Dreyer, on one of my stays in Damascus. I was sitting in my favourite restaurant with a tuba player from the Syrian Big Band. Michael and I drank a few araks together. The next day he invited me to play at the 2010 Morgenland Festival and compose a piece for the Syrian singer Ibrahim Keivo. Of all the festivals at which I have performed so far, this one is special. The organisers share the same passion with us musicians.

The Morgenland Festival not only brings together eastern and western musicians who are at the top of their fields, I also feel a personal connection to everyone here – from the driver who picks us up from the airport to the people of Osnabruck. If you ask me about my biggest audiences, they were in Damascus, New York and in Osnabruck.

Dima Orsho: For me, it all started with our band Hewar, which we founded in 2003. Shortly after that, we had our first performance at the Morgenland Festival. In our band we brought different musical elements together: Kinan played the clarinet, I sang as a soprano and our friend Issam is an outstanding oud player who is completely rooted in classical Arabic music. Now, destiny made all of us live in the United States. Kinan and I went to the US to study long before the war started; Issam and his family moved to Chicago last year. 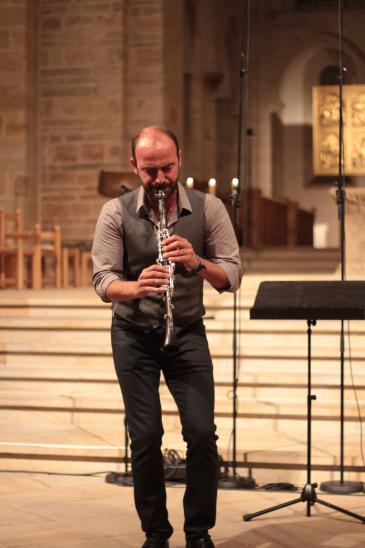 "The Morgenland Festival not only brings together eastern and western musicians who are at the top of their fields, I feel a personal connection to everyone here – from the driver who picks us up from the airport to the people of Osnabruck," says Kinan Azmeh, pictured here performing at the Morgenland Festival 2014 in Osnabruck

Has living abroad left any marks on your music?

Orsho: Since I have been living in the United States I sing more maqam than before, because for me, this is the way I can connect to my homeland. Of course, there is a kind of nostalgia in me about Syria. And singing Arabic music is what gives me a profile as a musician in a foreign country. We have toured a lot around the US; sometimes I encounter biased reactions like "Wow, how come a woman from Syria can sing so freely without a hijab on her head?"

Azmeh: At times people in the West are surprised to hear that we play classical music in Syria. With Hewar, which means "dialogue", we stayed really close to the name of our band. We tried out different styles and stimulated each other by the different characters that every musician brings to the group. As a musician, you're always inspired by what is around you. Maybe by living in the US, my jazz side has grown stronger. Maybe I have also become more Arab, because I miss Syria. I can't really tell.

Kinan Azmeh, this year you have given concerts in the US, France, England, Turkey, Lebanon and Jordan, but you haven't played in Syria for a while. What is it like to play at home?

Azmeh: If we give a concert in Damascus, we are like a football team playing a home game. I usually know many people in the audience and I can feel their love very strongly. But of course they are also more critical than any audience in the West.

My last concert in Damascus was in May 2012 at a festival called Oriental Landscapes, which brought together artists from the contemporary Arab music scene. There are still concerts at the Damascus opera house, even now. But personally speaking, I can't play there when I see how Aleppo is being bombed day by day. I can't play when I know that 80 per cent of the people wouldn't have access to my concert because they can't make it through the checkpoints. Nevertheless, it is wrong to think that people don't need music in times of tragedy.

Orsho: Yes, we have to consider that the Syrian musicians make a living from playing music. They need music to survive in these difficult days. But for us it is difficult to give concerts in Syria now. I came to the US in 2005. Living in exile, we don't always know the realities on the ground – let's say the structures, for example, where to get permissions to perform or how to organise a concert venue. 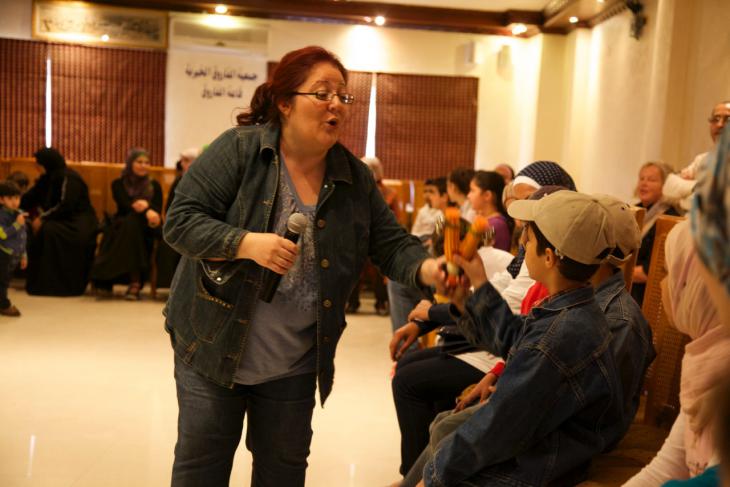 Dima Orsho during a workshop for Syrian refugee children organised by Terre des Hommes. "We only visited this refugee centre for a day. [...] In the end, all the kids were full of joy and humour. It shows that even in the darkest moments, there is room for dancing and singing," says Kinan Azmeh

Some voices argue that you shouldn't perform music at all in times as hard as this. Do you agree with that?

Azmeh: I can totally understand that musicians decide to go on stage, even now when Damascus is in turmoil. If I were to play in Syria right now, I would go and perform in the small places and villages. After the revolution started, I was not able to write music for a whole year. I play music because through music I can experience emotions I don't have the luxury of experiencing in real life. When I watched the revolution unfold on TV, it stirred emotions in me I had never experienced before in my life. I felt that something that is far more important than my compositions is going on in my country.

But then, after taking this break, I realised that I have the right to write music. This is also an act of freedom. As a clarinet player I have more freedom than a singer-songwriter who uses words to express his emotions. When I perform in the West, deep inside I feel that maybe some of the sounds will somehow reach the people of Syria. What else can we do in the midst of all this distress? All we can do is sing and play our hearts out. For people in the West, it is just too easy to blank out all the suffering in the world. So if even one person in the audience is inspired, it is a success.

In May, both of you organised a music workshop for Syrian refugee children in Irbid, Jordan. What do you remember most about this visit?

Orsho: Our visit to Irbid was organised by the Osnabruck-based aid organisation terre des hommes, which works with Syrian refugee children. I conducted a singing workshop with young refugee women. They were so shy in the beginning. Their image of a singer is typically shaped by what they see on TV. This makes them think: I don't look like a pop star, so why should I sing? Also, there is this kind of dodgy, nightlife kind of image of women singing in our culture. But in the end, it was very impressive to see how these girls gave a concert in front of their parents.

Azmeh: Syria is the biggest human tragedy since World War II. Half of all Syrians have had to leave their homes. We only visited this refugee centre for a day. But the real heroes are all the volunteers in these places who work incessantly without being seen. In the end, all the kids were full of joy and humour. It shows that even in the darkest moments, there is room for dancing and singing.

We also brought them recorder flutes and managed to play at least some notes with them. If only one of the kids was inspired to continue playing, this visit was worth it. In November I will have a one-week workshop with children at Jordan's Zaatari camp. For me, charity concerts are not enough. Working with refugees is very inspiring for us, and we can also inspire other people to become active.

Kinan Azmeh is a world-renowned clarinettist. Born in 1976 in Damascus, he was the first Arab to win the premier prize at the 1997 Nicolai Rubinstein International Competition, Moscow. He graduated from New York's famous Juilliard School and is a founding member of the Syrian fusion band Hewar. Azmeh has toured extensively around the world as a soloist, composer and improviser.

Dima Orsho is a Syrian soprano. Born in 1975 in Damascus, she studied at the Arab Conservatory of Music in Damascus and is the first Syrian soprano with a Masters degree from The Boston Conservatory. She has performed as a soloist around the United States, Europe and the Middle East and is a member of Hewar.

Giessen, Eichsfeld, Kusel, Berlin – cars bearing old German number plates are the latest trend on the streets of Cairo. Many Egyptians regard the discarded plates as chic. What ... END_OF_DOCUMENT_TOKEN_TO_BE_REPLACED

Tunisia has been going through a severe economic and political crisis in recent years. More than one in three young people there are unemployed. For many skilled, qualified and ... END_OF_DOCUMENT_TOKEN_TO_BE_REPLACED

German imams have publicly expressed their solidarity with the women of Afghanistan. In a letter of protest, the clerics say that the Taliban regime's decree barring women from ... END_OF_DOCUMENT_TOKEN_TO_BE_REPLACED

At the end of every year, the team at Qantara.de gives you a run-down of the ten most-read articles on the site over the past 12 months. Here is a quick overview of the stories ... END_OF_DOCUMENT_TOKEN_TO_BE_REPLACED

Social engagement is often motivated by religious factors. A new book explores the background to these community efforts and appraises how effective they are in helping to ... END_OF_DOCUMENT_TOKEN_TO_BE_REPLACED
Author:
Marian Brehmer
Date:
Mail:
Send via mail

END_OF_DOCUMENT_TOKEN_TO_BE_REPLACED
Social media
and networks
Subscribe to our
newsletter