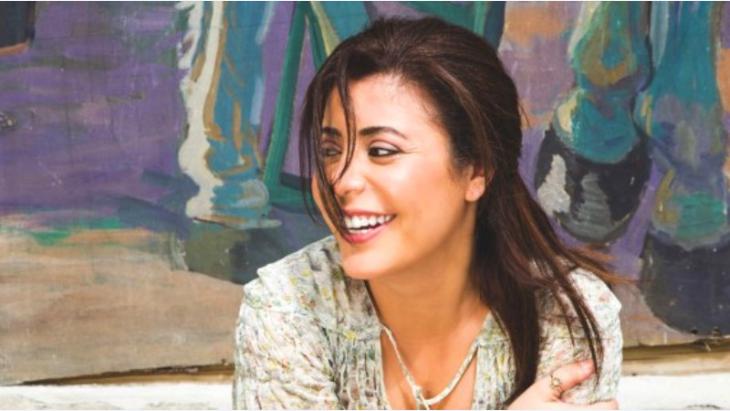 At Germanyʹs recent Berlinale, the Lebanese director Reem Saleh presented herself as the great hope of Arabic-language cinema with her first feature-length film "Al Gami’ya". Interview by Ahmed Shawky

A Lebanese person shooting a film about a district of Cairo. Wasn’t that difficult? When did you decide you would make your first film about the Rod El Farag district, of all things?

Reem Saleh: It wasn’t something I consciously decided to do. It was a spontaneous thing. It started because I was there a lot over a particular period, visiting an old friend of my mother. She was seriously ill and her two daughters tried to meet the cost of her treatment using a great portion of their own means. Each time, I met all the neighbours there and all of them helped, either with food or modest sums of money. Even the destitute ones sat down with her in order to provide moral support. I saw how people gave everything they had. For most of them, compassion was the only thing they had to give. I had the feeling I had a duty to present this section of society that we often do an injustice to, in that we have a false conception of them. Of course they are poor. But they have dignity and self-respect. And they stick together. That was the how the project came about.

The film is called ‘Al Gami’ya’ (literally: ‘The Community’), as a reference to the solidarity in Rod El Farag. But it’s also about how people relate to one another, to the dead, to religion, to the value of life, despite all their difficult circumstances. How did you come to choose the title? How many hours of material did you have at the end and how long did filming take?

Saleh: It was difficult to find a narrative that held the film together. I could have pursued individual stories, but I would have ended up with a load of loose ends, meaning the film itself would have fallen by the wayside. Because I knew the place and the cultural factors, I decided very early on that ʹthe communityʹ and how people collected money for members of their community, should form the link between the stories and how people there live. That helped me be able to tell a complete narrative. 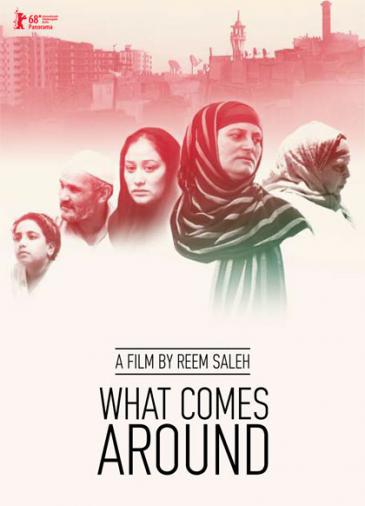 Reem Saleh accompanied the residents of the impoverished Rod El Farag district for over six years. In her film "Al Gami'ya" (What Comes Around) she documents their daily fight for survival and gives them a chance to present their perspective on deep-rooted traditions, illness and death

I shot the film over the course of six years. By the end, I’d amassed an enormous amount of material. Some of it dealt with political events. However, I’d decided early on not to use this material.

But that was the only way to be able to film as much as possible. I didn’t direct people or ask them to talk about a particular topic. I simply waited, in order to be able to catch a natural moment at some point, to win people’s trust and be able to glean information from them. That required intensive psychological work and forced me to film scenes as they were and then either use them in the film or not. Therefore, at the beginning I filmed hours’ worth of interviews with people, even though I knew from the outset that I wouldn’t use them in the film. It was just a case of showing the people in front of the camera some respect.

Egyptians have an allergic reaction to cameras, especially cameras wielded by non-Egyptians. How did you overcome this hurdle?

Saleh: I barely used anything from the material I filmed during the first year. After about eight months of shooting, the people from Rod El Farag gradually started to behave in a more natural manner. I understood that anyone going there to film such a neighbourhood in two or three months who then comes out with a so-called documentary film is generally a fraud or has themselves been deceived. At the beginning, they only reveal what they think you want to see and hear.  Only after a while does the facade begin to crumble and they start to behave naturally, because they no longer regard you as a stranger in front of whom they must dissimulate.

Egyptians really do have an allergic reaction to cameras and display a fear of them. With some of them, this is palpable and I encountered this with a few of the main characters, particularly in the case of Umm Tarek, an old woman who runs a shop without a licence and who lives in constant fear. What really helped me, however, was the fact that people regarded me as a daughter. My mother comes from Rod El Farag, therefore I too must also be part of the place and a member of the wider family. People sensed that I’d never show this family in a bad light and they were right. But regarding constant fear: as soon as pros in the film industry heard I was shooting a film in Rod El Farag, they asked me why. Did I consider the poor people there as a fertile topic for a film? But as soon as my actual motives became clear, their fears melted away.

What’s more, the inhabitants of Rod El Farag showed me who was best to speak to about different matters and how best to speak to them. In their world, they really do have their own code. Anyone wanting to penetrate this world needs to learn the code. As a result, the residents practically functioned as production assistants.

The background noise in the film is quite intense. Sentences are never completed and there’s always something else to be heard in the background. To what extent does this benefit or adversely affect the film?

Saleh: The noise level was an enormous technical challenge. Sometimes the camera team were virtually in pieces, because they had to constantly remain on the heels of the protagonists. During the wedding scene, the sound man looked at me beseechingly, because he just wasn’t able to make any normal sound recordings. But it was the natural environment and the characters who lived there that we wanted to film. Nothing could have worked out any differently, so there was no point in us trying. We also needed to find a way to portray this atmosphere on screen while still keeping an eye on the characters.

The film also addresses the topic of female genital mutilation. One of the girls collects money in the community so that she can be cut, against her father’s will. How did you come across this story and why did you want to include it in the film? 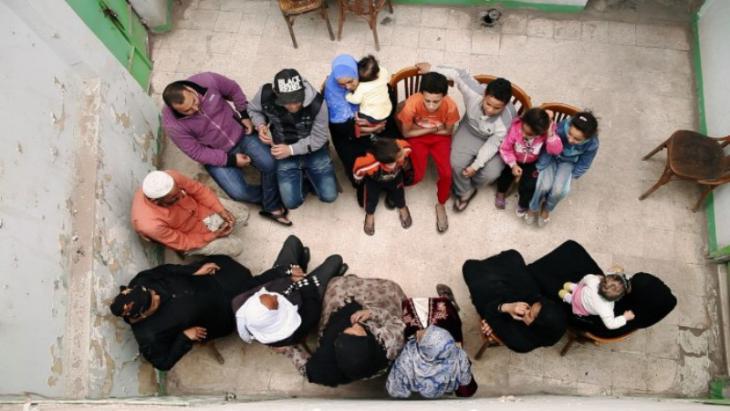 Film director Reem Saleh: "the residents of Rod El Farag really do have their own code. Anyone wanting to penetrate this world needs to learn the code. As a result, the residents practically functioned as production assistants"

Saleh: I didn’t initially want to have children as main characters in the film, because children are usually exploited to evoke sympathy, which absolutely wasn’t my intention. I just wanted to show how children learn about community by watching the adults. Dunia, the girl in question, was ideal, because of her personality and how she speaks and thinks. In this environment, that in itself is unique.

After filming and shortly before my departure, she came to me and begged me to stay for another month; the month in which she would be cut. I was afraid and tried to persuade her parents to call it off. I even turned to a religious dignitary, so that he could persuade her that cutting cannot be reconciled with Islam. The father was indeed persuaded. So I departed. And when I returned, it transpired that Dunia had used the money collected in the community to go ahead with the cutting, without her father knowing about it.

At this point it became absolutely clear that we must include the story in the film, because people believe that cutting is torture that girls are carried off for. They don’t believe that cutting is deeply rooted in the culture to such an extent that girls want it and are proud of it, because it’s a sign of having reached maturity. I am of course against it and do my best to stop it, but nevertheless it’s important to dispel this false conception.

The film ends with a dedication to your mother, who instructed you to film the inhabitants of her place of origin. You have brought their stories out into the world. Do you have the feeling of having accomplished the mission your mother sent you on?

Saleh: This question is the most difficult of them all for me to answer. My biggest worry is how the people of Rod El Farag will react to the film. Their opinion is what matters to me most. I just wanted the world to see the Rod El Farag district through the eyes of my mother, who is able to see the beauty, goodness and dignity behind the poverty. If I succeed in that, then I’ve fulfilled a large part of the mission.

The past enthusiasm of the Egyptians lives on in the Iraqis of today. But just as they were nine years ago in Cairo, current prospects in Baghdad are dim. A comparison by Birgit ... END_OF_DOCUMENT_TOKEN_TO_BE_REPLACED

Insults directed against Egyptian President Abdul Fattah al-Sisi have been particularly prominent among the hundreds of chants by Arab protestors in Algeria, Sudan, Iraq and ... END_OF_DOCUMENT_TOKEN_TO_BE_REPLACED

Political analyst Taqadum al-Khatib argues that Egypt can, in co-ordination with its European partners, develop a common vision to solve the complex conflict in Libya. For this to ... END_OF_DOCUMENT_TOKEN_TO_BE_REPLACED

The upheavals of the past year in the MENA region are arguably as momentous as those of the Arab Spring in 2011. Yet perhaps the biggest difference is that our interest seems to ... END_OF_DOCUMENT_TOKEN_TO_BE_REPLACED

In 2019, the long-running Penguin Classics series released its first novel translated from Arabic: Tawfiq al-Hakim’s "Return of the Spirit", conveyed into English by William ... END_OF_DOCUMENT_TOKEN_TO_BE_REPLACED

Comments for this article: One big family

As far as I know the word "gami'ya" means "money collected to be lent to someone in need". Example: "Dunia had used the money collected in the community to go ahead with the cutting, without her father knowing about it."
In formal Arabic it means "association" such as a human rights association or a women association. I don't think at all it has the meaning of "community".