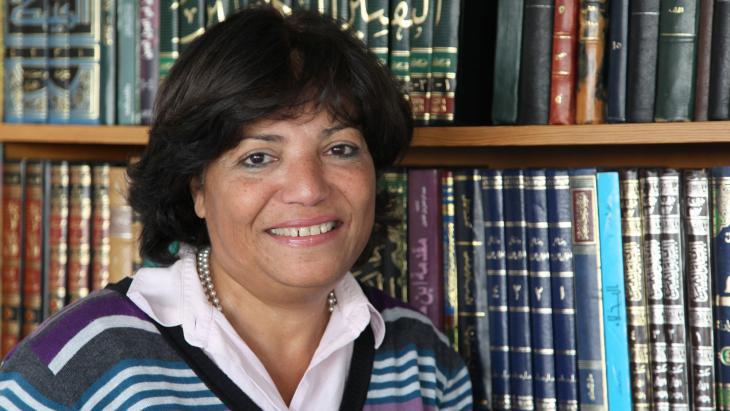 "We urgently need reform within Islam"

What is the focus of a feminist Islamic theologian's work? And what is the best way to deal with controversial Koran verses in the modern day? Claudia Mende talked to Maha El-Kaisy-Friemuth, professor of Islamic Religious Studies at the University of Erlangen-Nuremberg

Professor El-Kaisy, how do you see your task as an Islamic theologian at a German university?

Maha El-Kaisy-Friemuth: At the new departments of Islamic theology in Germany, we have the great opportunity to build up a reform-oriented Islam. That's not an entirely new project, of course, and we don't want to reinvent the normative foundations of Islam. But what we urgently need right now is a reform within Islam, so that Islam can speak to our modern situation with its present-day problems.

What do you mean by that?

El-Kaisy-Friemuth: By a reform of Islam I mean a process similar to that which occurred during the Christian Reformation. That's how we understand our scholarly work at the Department of Islamic Religious Studies (DIRS) in Erlangen. We don't reject what the ulema, the traditional legal scholars, have said about the Koran and Islam over the centuries, but we do try to think beyond that and formulate new statements for the present day.

We can refer back to a process that began in the Muslim countries in the early twentieth century. Many theologians and Islamic thinkers have already gone very much in this direction, for instance Ali Shariati or Abdolkarim Soroush in Iran; Nasr Hamid Abu Zeid in Egypt, Mohammed Arkoun in the European context and Farid Esack in South Africa. All of them – and many more Muslim thinkers – have tried to find a new understanding of Islam and a new way to formulate it. They've been looking at very different aspects; my research concentrates partly on the position of women in Islam. 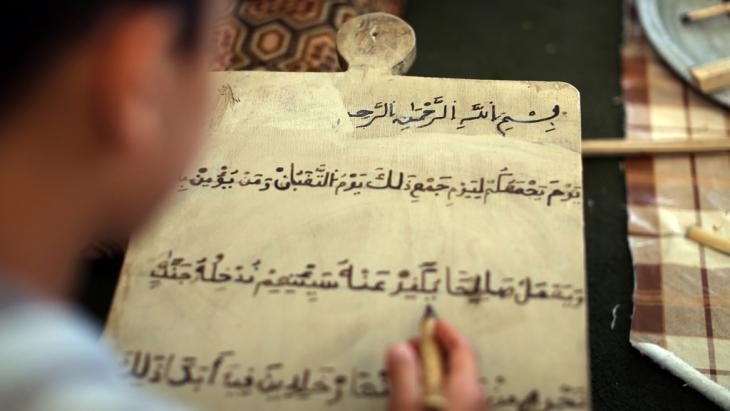 In favour of a contemporary reading of the Koran: "We don't reject what the ulema, the traditional legal scholars, have said about the Koran and Islam over the centuries, but we do try to think beyond that and formulate new statements for the present day," says Prof Maha El-Kaisy-Friemuth

How do you go about your research?

El-Kaisy-Friemuth: My question is this: in view of contradictory statements in the Koran, how can we understand the position of women in Islam today? How can we deal with problematic verses without rejecting them, but by interpreting them for the present day? Take, for example, Sura 4, Verse 3: "And if you fear that you cannot do justice to orphans, marry such women as seem good to you, two, or three, or four." The Koran is speaking here in the context of the seventh century, when relations between the genders were entirely different to the way they are now. These statements have to be respected; but how do we avoid them restricting women's possibilities today?

But surely some statements are simply not acceptable nowadays.

El-Kaisy-Friemuth: We can make the same text speak differently. Many feminist theologians try to reflect on the Koran in this way, for example by looking more closely at the historical context. The Koran was revealed in a time of transition from a matriarchal to a patriarchal society. In pre-Islamic times, goddesses were also worshipped in Mecca; the main deities were actually female. That shows that the old traditions in Mecca were under a strong matriarchal influence. But there were also patriarchal tribes on the Arabian Peninsula, which gradually came to the fore because they built up a strong trading position.

What does that mean for our modern-day understanding of the Koran?

El-Kaisy-Friemuth: It explains why the Koran fluctuates between matriarchal and patriarchal tendencies. Let me give you an example: the Prophet was married to several women. It was well known that his wives were very actively involved in building the Islamic community. When Mohammed and his followers came to the patriarchal Medina, there were strong voices there that said the Prophet's wives should stay in the background. We can see that influence in Koran verses like Sura 33, Verse 53. These verses are about social occasions at the home of the Prophet. At the end of the verse, it says: "When you ask his wives for something, do so from behind a screen."

Is this verse key to the demand that women should veil themselves and behave modestly in public?

El-Kaisy-Friemuth: The verse is often understood as meaning that women should cover themselves with a niqab. But then there are verses like in Sura 4, 28 to 31, in which the Koran speaks about women who earn money and are equal to men. If we put the two next to one another, we think: what a contradiction! To understand it we have to know the contexts. That's good research. 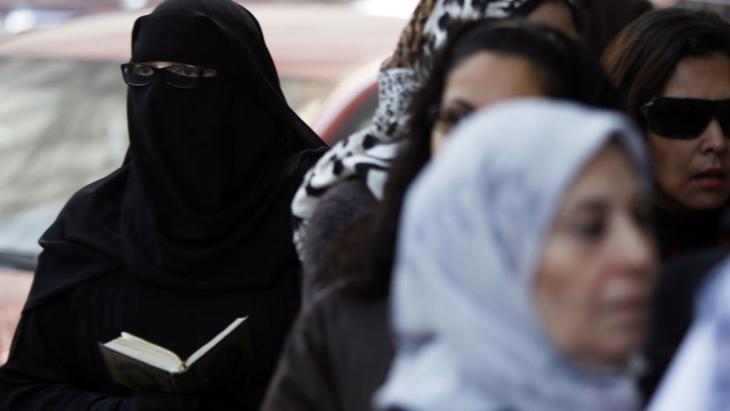 The importance of reading the Koran in context: according to El-Kaisy-Friemuth, Sura 33, verse 53 is often understood as meaning that women should wear a niqab. "But then there are verses like in Sura 4, 28 to 31, in which the Koran speaks about women who earn money and are equal to men. If we put the two next to one another, we think: what a contradiction! To understand it we have to know the contexts."

How can these contradictions be resolved?

El-Kaisy-Friemuth: First of all we have to differentiate between judgements from the Koran itself and judgements from one of the commentators, who are generally influenced by their own culture. If the evaluation comes from a commentator, then we have to look at the context of the passage. Is it a fundamental valuation? Or does it refer to a specific situation?

Sura 33, Verse 53 is about how to behave when you're invited to a meal by the Prophet. For me, it doesn't contain any rule about women's behaviour, only instructions for polite guests. The background is the beginning amalgamation of various tribes with different traditions of politeness into one Muslim community.

Is this kind of Islamic theology only possible in the West at the moment?

El-Kaisy-Friemuth: In most countries of the Islamic world, with the exception of Turkey, this kind of theology would be difficult right now. However, there is a considerable number of progressive Muslim scholars in Iran or Morocco, for example, who take their orientation from the rationalist schools of Islam. There are notable statements on it in the Islamic tradition. They are also important for us, but they are not the end of the debate. We're developing the tradition further, going back to things that have been said before and discussing them in new ways.

Who are your personal role models?

El-Kaisy-Friemuth: For me, for example, the feminist Islamic theologian Leila Ahmed is an important figure. She was born in Cairo and teaches in the USA, working mainly on gender issues. In Erlangen, we want to foster different forms of reform-oriented Islam. But these new approaches can also come from a traditional or a rational school. Our long academic history is very rich in different theological traditions.

After at first agreeing to accept the grand prize as "Cultural Personality of the Year" in the Sheikh Zayed Book Award, Juergen Habermas then decided to decline the honour. A ... END_OF_DOCUMENT_TOKEN_TO_BE_REPLACED

Philosopher Juergen Habermas was due to be awarded a major Arab prize in Abu Dhabi, but has turned it down following criticism. This decision torpedoes Arab efforts at a ... END_OF_DOCUMENT_TOKEN_TO_BE_REPLACED

At nearly 92, Juergen Habermas is still advocating for a robust and transparent civil society. Now Germany's greatest living intellectual has rejected a book award from the United ... END_OF_DOCUMENT_TOKEN_TO_BE_REPLACED

Violent and racist crimes are on the up in Germany, according to official statistics on politically motivated crimes. Crimes by right-wing extremists hit their highest levels ... END_OF_DOCUMENT_TOKEN_TO_BE_REPLACED

In his book "Ground Zero: 9/11 und die Geburt der Gegenwart" (Ground Zero: 9/11 and the Birth of the Present) Islamic scholar Stefan Weidner analyses the consequences of the ... END_OF_DOCUMENT_TOKEN_TO_BE_REPLACED

Among Muslims, the image of women as "cossetted hijab-wearing princesses" is frequently invoked. But Muslim women have long wanted to be more. In her essay, Karoline Roscher- ... END_OF_DOCUMENT_TOKEN_TO_BE_REPLACED

Comments for this article: "We urgently need reform within Islam"

Indeed. We urgently need a liberal/modern Islam. One would be surprised by the collection of people who are privately atheist. Islam is going to lose it's most dynamic people if it doesn't change.

END_OF_DOCUMENT_TOKEN_TO_BE_REPLACED
Social media
and networks
Subscribe to our
newsletter