There is no democracy in Iran. President Ahmadinejad silenced the "green opposition movement" after his disputed election. Exiled artists, however, are criticising violence and injustice. The cartoonist Mana Neyestani has 15,000 followers on Facebook, for instance, showing that the idea of democracy is not dead in Iran 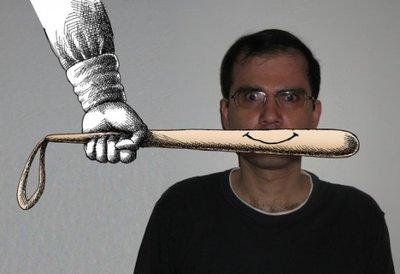 An Iranian smiley, of sorts: Even though some minor freedoms remain, the government strictly controls all communication networks, says Mana Neyestani

​​How do Iran's intellectuals perceive the trend towards democracy in Turkey, where a constitutional referendum recently boosted the government's supremacy over the military?

Mana Neyestani: Iranian intellectuals pay close attention to what happens in countries like Turkey or Malaysia, and do their best to assess international matters. But they need efficient communication with people to share their knowledge. Iran's government is standing in the way, prohibiting newspapers, controlling television networks, censoring books and films, filtering the internet and attacking student movements. Even though some minor freedoms remain, the government strictly controls all communication networks.

Do people hope there will be a referendum like in Turkey someday?

Neyestani: Secularism and democracy cannot be imposed with bayonets and army force. I am glad that Turkey has reduced the military's power. On the other hand, I agree with Turkish intellectuals who worry a future Islamist regime might be taking root. Suppressing religious tendencies, however, only tends to strengthen radical parties, so the solution is to respect religious beliefs and broaden the understanding of democratic principles at the same time. In Iran, there is a long way to go before we can think about such referenda.

Turkey has been influenced by European "soft power" in the sense that the government knows the country has to meet EU standards if their country is ever to join the EU. In regard to Iran, would that kind of influence be helpful?

What is your personal situation? Do you feel repression? 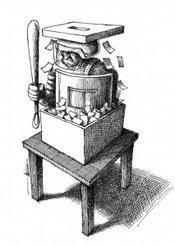 ​​Neyestani: Of course I do. Anyone who wants to stay independent and work outside the regime's official policies is under pressure. Books, movies and music are strictly controlled, but the greatest pressure is on newspapers and magazines. Most of our reformist newspapers have been banned. Those that are still working are very cautious and quite aware of the risks, even fearful. For me as a cartoonist, there is no opportunity to work in Iran.

So you rely on electronic media?

Neyestani: Yes, I use online media to reach out to Iranian internet users all over the world, in particular Iranians who live in Iran and use anti-filter software to follow news on the web. Sadly, the number of people I can reach is limited because the government is censoring the internet and many places still lack easy internet connections.

What kind of pictures put you at risk?

Neyestani: For cartoonists in Iran, there are two sorts of red lines. First, there are official and clear red lines. We are not allowed to tackle religious subjects, depict clerics or criticise the supreme leader. But there are also vague and variable red lines. Each new political situation can lead to a new taboo. Recently it has become taboo to discuss nuclear activities and possible fraud in last year's election.

Today it even takes courage to use the colour green because it may be considered to stand for the "green" pro-democracy movement. A large share of the Iranian people has strong religious feelings and will not accept any jokes in this field. Many people still consider cartoons as a way to insult someone – and they only appreciate them if they serve as weapons against their opponents. 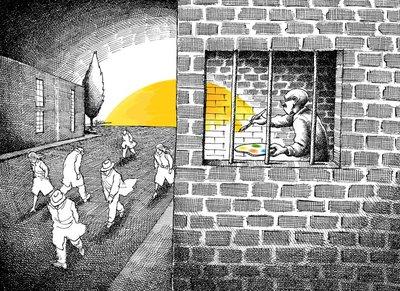 Artist in solitary confinement: Mana Neyestani was put into prison by government officials, but managed to escape. He is now in exile in Malaysia. "For me as a cartoonist, there is no opportunity to work in Iran," he says

​​What is Ayatollah Ali Khamenei's strategy?

Neyestani: It seems to me that the government is basically trying to make any kind of political activity risky and even dangerous. It was mostly well-educated and urban people who protested last year. So now the government is trying to instil fanaticism in the lower classes in order to keep the middle classes in check. The government is emphasising social gaps and certainly not trying to engage with opponents.

What do you personally think about the planned stoning of Sakineh Mohammadi Ashtiani? This kind of news may seem a cynical game played by Islamic leaders and Western mass media: Would it sometimes be better to keep silent?

Neyestani: Without any doubt, stoning a person is inhumane. In my eyes, people who stay silent are guilty too, and not only those who actively take part in killing a person that way. In one of my cartoons, I portrayed fanatics throwing stones they were taking from their own apathetic souls, so in the end they were emptying themselves.

The Iranian government is not looking for justice. That was also evident when it recently accused three Americans of spying. Western governments would not send their James Bonds on foreign missions by bicycle! I believe that international pressure can help prisoners, and that silence amounts to an approval of burying them alive in their cells. 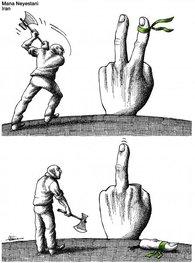 Be silent, remain seated: "There is no doubt that Iran's current situation is partly due to the way Iranians have traditionally been brought up," Neyestani says

Neyestani: Ever since the revolution, official cultural policy has preached a kind of radical morality. But private companies have published translations of Tintin or Harry Potter, for instance. These translations have attracted a lot of fans. Until the late 90s, publishing comic books was not allowed. They were said to prevent the growth of children’s imagination. But that is nonsense. Children can learn quickly, and they can be taught many cultural and anti-cultural problems. Comic books can teach love, friendship and thinking – and not just strict obedience.

What is your message to children, as an Iranian cartoonist?

Neyestani: I love to draw on my inner child when I'm working for kids. I don’t like the top-down perspective. From childhood, we are taught to be silent, to ignore our rights and remain seated. There is no doubt that Iran's current situation is partly due to the way Iranians have traditionally been brought up. I love to make children feel confident and tell them that being naughty or not taking orders is not always bad. I love to tickle their imagination.

Mana Neyestani is an Iranian cartoonist. He has also written comic books and created storyboards. He was born in 1973. Currently he works for the websites "Mardomak" and "Radiozamaneh".

Marjane Satrapi
East Is Not East, West Is Not West
In the cartoon novel "Persepolis," Iranian illustrator Marjane Satrapi has created a sensation with the story of her childhood in Iran. The book has been translated into several different languages and has met with enthusiastic acclaim. Petra Tabeling spoke with the artist

The Documentary "The Green Wave"
The Rise and Fall of Iran's Protest Movement
Ali Samadi Ahadi's dramatised documentary The Green Wave retells the drama of the 2009 presidential elections in Iran, unintentionally revealing the weaknesses of the opposition against the hardliners around Ahmadinejad and Khamenei. By Stefan Buchen

END_OF_DOCUMENT_TOKEN_TO_BE_REPLACED
Social media
and networks
Subscribe to our
newsletter