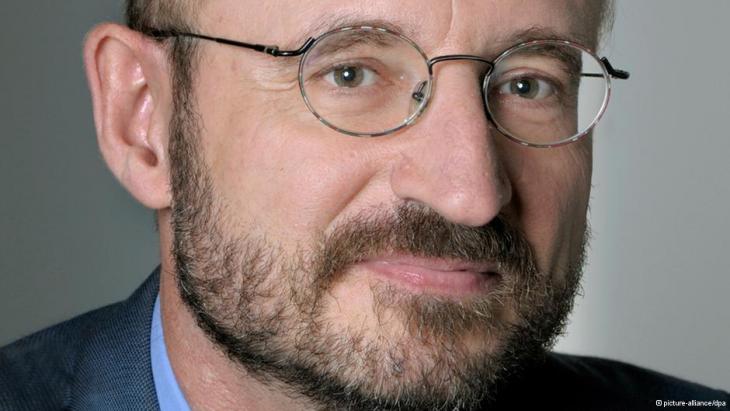 According to the Islamic scholar Mathias Rohe, it is high time for the Muslim population living here to find religious foundations that are clearly within the framework of the secular constitutional state. Loay Mudhoon talked to him.

​​The Archbishop of Canterbury, Rowan Williams, caused a scandal in Britain with his suggestion of integrating aspects of Islamic law into the British legal system. In Germany, a number of journalists have issued warnings against a "further step by the Western world towards subordinating itself to the minority of Muslim immigrants who are unwilling to integrate". Are these fears justified?

Mathias Rohe: In my opinion, they’re not justified. Alarmism is all the rage these days. Some commentators think nothing of placing Islamist terrorism, "honour killings" and new mosques on the same level, and citing them as proof of an alleged Islamification of society. Yet the development in Europe shows that it is very much possible to defend society against violence based on Islamic beliefs. Crimes such as "honour killings" must be combated, but they have no legitimacy in Islam. And constructing religious buildings is one of the rights guaranteed by the constitution; citizens legally setting up a religious infrastructure are simply exercising their freedom of religion. Some representatives of the "majority society", it would seem, have certain gaps in their knowledge. Incidentally, as far as all the evidence shows, large majorities of the Muslims in Europe – which could get even larger – are certainly willing to integrate or have long since done so.

What do you think of Williams' suggestion? Can it even be reduced to a blanket plea for the parallel existence of the Sharia and British law?

Rohe: The archbishop made a very differentiated statement on the subject, clearly distinguishing between acceptable and unacceptable aspects of Sharia law. I would have preferred a more objective debate, although I don’t support the content of the Archbishop’s suggestion.

How realistic is his idea of a plural jurisdiction? Might these ideas question the basic principle of equality in the eyes of the law?

Rohe: That is at least factually possible, and therefore highly problematic. Naturally, every individual is free to deal with conflicts beyond the bounds of state mechanisms. That happens every day in families. And mediators and tribunals work well in various areas. The problem is when such "voluntary" institutions are set up for the use of parts of the population that already live at considerable distance from the state’s rules and regulations and its institutions, some of whom aren’t even familiar with the laws here. The example of Canada (temporary foundation of Islamic tribunal institutions) shows that pressure is then exerted on the weaker participants to turn solely to such institutions and thus sacrifice some of the rights guaranteed by the state. To be specific, this generally affects women, as the institutions apply the relevant traditional interpretations of Islamic law.

Rowan Williams referred to the integration of aspects of Islamic law into the British legal system as "inevitable" and stated that a restricted application of Islamic law might even strengthen British society as a whole. What effects could applying Islamic norms have on Muslims’ willingness to integrate?

"The archbishop made a very differentiated statement on the subject, clearly distinguishing between acceptable and unacceptable aspects of Sharia law," says Mathias Rohe

Rohe: Some aspects have long since been integrated, for example the instruments of traditional Islamic business practice – which present no significant problems from a legal point of view. Even the German state of Saxony-Anhalt has launched an Islamic bond to raise capital. Britain has introduced a form of adoption that has less far-reaching consequences than standard full adoption with the resulting status. It may well be designed mainly for Muslims, bearing their legal traditions in mind, but it is open for all as a new model. Particularly in family law, however, one should not be too quick to talk about "inevitability". It is a fact that a parallel structure of Islamic law has evolved in Britain, particularly among immigrants from the Indian subcontinent, which the Archbishop is apparently referring to. But the British should nevertheless attempt to promote the advantages of their state legislation and make it clear that it does allow a certain flexibility that can also be religiously motivated, for example in marriage contracts. It’s also important to develop cultural sensitivity in state institutions, taking the living conditions of such immigrants into consideration. As a whole, the field of marriage and family law is a sensitive one, and not just "private" with regard to the need for protection. Hence, we have to insist on the basic idea of equal rights of the genders and the religions, as principles that apply for all. Most Muslims see it that way as well. Plus, promoting willingness for integration must not take place at the cost of giving up one’s own basic ideas.

Other critics have claimed that there has been subtle pressure to link certain (sub) aspects of the Sharia with civil law for some time in Britain and other European countries. How real is this pressure in Germany?

Rohe: In international cases, our own legislation requires us to apply the law of their countries of origin to foreigners to a certain extent. Hence, we have enabled such a link for some time, although not in cases where the outcome would be intolerable for our concept of justice. With regard to internal cases, the only people making this type of further-reaching demand in Germany are isolated extremists. Admittedly, there are cases here, in which women married in Germany solely on the basis of Islamic rites want a divorce, for example. Rejecting them in state courts on the grounds that a divorce is impossible, as they have no valid marriage certificate, is not necessarily the wisest thing to do. We’re familiar with the idea of a declaratory annulment of non-existent entities. But as far as I am aware, the vast majority of Muslims here have come to terms with our laws very well.

Under the umbrella of Germany’s free and democratic constitutional order, the country’s inhabitants have freedom of religion (Article 4 of the German constitution). What rights can German Muslims derive from this?

Rohe: They can assert their rights on an equal basis with all other faiths, consciences and creeds, including visibility and actions in the public eye. The German constitution is open to all religions. These rights range from building mosques to founding Muslim burial grounds, practicing Halal slaughter methods and setting up Islamic religious education lessons, right up to indirect effects such as in private employment relationships (e.g. with regard to prayer times, religious holidays or clothing customs) – provided they meet the respective statutory requirements. Naturally, freedom of religion also has its limits, but these must not be drawn up according to majorities and minorities.

Many Muslims and non-Muslims talk about "Islamic commandments" when they actually mean "Islamic culture". How does German law deal with cultural traditions?

Rohe: Cultural customs are not protected by freedom of religion, but fall under the more restricted remit of free development of personality set out in Article 2 of the constitution. Incidentally, this field presents a number of tasks for Muslims in Germany: much of what people regard as Islamic and find objectionable is rooted in cultural practices and beliefs. One example is the sometimes grotesquely exaggerated formal concept of honour in patriarchal structures, which has repeatedly prompted terrible crimes.

What should Muslims do to help the modern secular constitutional state to take the normative standards of their religion into better account?

Rohe: For a section of the population living here permanently, which has become part of our society, it is high time to formulate religious fundamentals and find interpretations that fit into the inalienable parameters of the secular democratic constitutional state. We have the instruments, they just have to be used. Many people here aren’t scared of " Islam", but of its extremist negative aspects, which are manifested in a wealth of attacks and hate propaganda. Admittedly, we must always make it clear that this is a small majority of Muslims, whose actions and ideas are strictly condemned by the vast majority. Moreover, we must not put Muslims here into a position of collective liability for distressing phenomena such as the oppression of Christians and other religions in many parts of the Islamic world. Furthermore, the process of finding integrative interpretations of Islam can only succeed if the institutional requirements are met, such as by introducing Islamic religious education lessons and setting up appropriate training institutions for teachers and Imams. That will cost money and effort, but there is no alternative.

Professor Mathias Rohe is a scholar of law and Islam studies. He holds the Chair of Civil Law, Private International Law and Comparative Law at the University of Erlangen-Nuremberg. Since 2001, he has headed the Society of Arabic and Islamic Law (research focus: Islam in Europe and current developments in Islamic law, Islam and rule of law).

Qantara.de The Archbishop's Sharia Faith Market before the Courts The Archbishop of Canterbury created a furor by voting for the application, within limits, of the Sharia. The idea is not a new one, however. Critics maintain that for some time England has been under pressure to combine aspects of the Sharia with civil law. Gina Thomas reports Sharia Law in Germany Islamic Bonds Provide Debt Relief The eastern German state of Saxony-Anhalt has been looking for creative investments to ease its burden of debt, and has found a new source of funds in an unusual, high-growth market: Islamic bonds. Christine Harjes reports Emran Qureshi - Heba Raouf Ezzat Are Sharia Laws and Human Rights Compatible? In their correspondence, Emran Qureshi (journalist and expert for Islam and human rights) and Heba Raouf Ezzat (lecturer for political science and womens' rights activist) discuss the role of the sharia in Islamic countries and in how far sharia laws are compatible with human rights.

END_OF_DOCUMENT_TOKEN_TO_BE_REPLACED
Social media
and networks
Subscribe to our
newsletter