Syria: "Iran is not fighting in Idlib"

The Syrian war isn't over yet. Assad and Russia have been bombing Idlib for months. It is striking that Iran refuses to fight in the decisive battle for the last bastion of the insurgents, says Middle East expert Andre Bank in an interview with Diana Hodali

Assad and Russia have been bombing Idlib province, controlled by rebels and jihadists, since April. What is their goal?

Andre Bank: The Assad regime has long wanted to completely re-conquer Syria. After the former rebel-held areas – Ghouta east of Damascus, Daraa in the south and the countryside around Homs in central Syria – were gradually taken back by the Assad regime with the help of Iran and Russia in 2018, it was only a question of time as to when they would turn to the rebel stronghold of Idlib.

Late last summer, an offensive against Idlib was already imminent. Then, very surprisingly, an agreement was reached between Russia and Turkey, which stabilised the situation.

Could you outline the agreement?

Bank: The Idlib agreement was that Turkey would keep control of the province through its external military observation posts. In return, Russia demanded that Turkey take action against Hayat Tahrir Al Sham (HTS). The HTS Jihadist Alliance emerged from the Nusra Front. The former Syrian al Qaida offshoot is the most powerful aggressor within the province of Idlib. But there are also rebels who are closer to Turkey and belong to the Free Syrian Army. HTS is not close to Turkey. But Russia and Assad would not attack. The deal was admittedly relatively fragile from the very beginning. 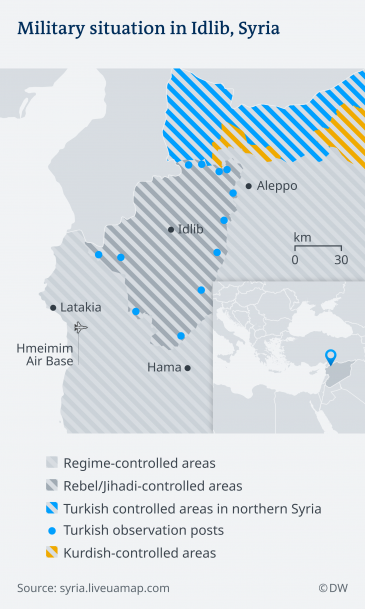 In Idlib and adjacent areas, more than three million people live under the control of the jihadist alliance Hajat Tahrir al-Sham (HTS) and other rebel groups. A large proportion of these are refugees from other parts of the country and fighters who were taken there with their families after the reconquest of former rebel bastions such as Homs, Aleppo and East Ghouta

"Iran and Russia are not pulling in the same direction"

What did Turkey expect from the deal?

Bank: Turkey has controlled an entire strip of northern Syria since its two military offensives in 2016 and 2017. Turkish interest has long been less in Idlib and more in the containment of Kurdish-controlled areas in the northeast, the north and in Afrin. A land swap was agreed which led to Turkey controlling north-western Afrin and the Kurds retreating to the area east of the Euphrates River.

Idlib and the northeast are the only two remaining areas within Syria not currently controlled by Assad, Russia, Iran and the pro-Assad militias.

So Turkey never had any interest in Idlib going to Assad?

Bank: Indeed not. It was always about keeping a foot in Syria for the post-war order. Since the autumn of last year the Turkish military has failed to really contain HTS. In fact, HTS is clearly the strongest military actor, especially in the southern and central parts of Idlib province. The Assad regime has kept up the pressure, hoping to recapture this area and has co-ordinated with Russia in this regard.

Does Turkey provide the rebels and HTS with military or logistical support?

Bank: Here we need to differentiate. Ankara provides direct support to those rebels, calling themselves among other things the National Liberation Front. They are supplied with weapons, training and also retreat possibilities. The jihadists of HTS  on the other hand are not directly supported by Turkey.

What role is Assadʹs ally Iran playing in Idlib?

Bank: One thing that is often forgotten in the current situation: Iran, Lebanese Hezbollah and other Shia combat units are not fighting in Idlib. They played an important role in the rapid re-conquest of former rebel strongholds in 2018. But they are not represented in Idlib because their leaders know that the fight for Idlib will be particularly bloody. After al, there is no massive military asymmetry in favour of the regime in Idlib, as there was in Ghouta or Daraa in 2018.At the same time Iran and Hezbollah are keen to play an important role in the future of Syria. Yet the conflict over Idlib is increasingly showing that Iran and Russia are not necessarily pulling in the same direction in Syria. There is no agreement between them as to what a future Syria should look like.

Russia is also bombing Idlib. Moscow must be concerned that Assad and his regime quickly regain control of the entire country.

Bank: I don't believe that Russia is only involved in these bombardments to re-conquer the entire region. The Russian bombardments are intended to increase pressure on Turkey in the short term, so that Turkey steps up its fight against HTS, thus allowing new negotiations to begin. 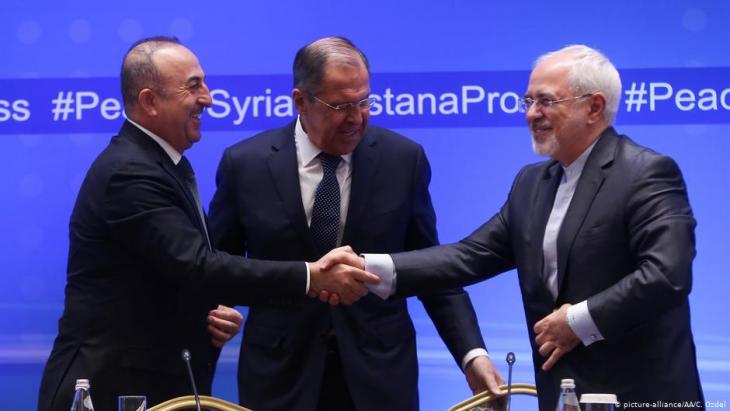 Fragile deal: "The agreement on Idlib was that Turkey could keep control of the province with the help of its observation posts from outside. In return Russia asked Turkey to take action against Hayat Tahrir Al Scham (HTS)," explains Syrian expert Andre Bank

Russia wants to significantly reduce its presence in Syria. After all, the deployment is expensive and not popular with everyone in Russia.

So has the situation in Idlib become more complex due to the strength of the jihadists and rebels and divergent political interests?

Bank: It is clear to many actors that Idlib is a different prospect compared to the other rebel strongholds that have already been conquered. Aerial bombardment alone will not enable this region to be recaptured. But that is what has happened so far. And these bombardments are extremely brutal: cluster bomb operations in residential areas, bombings of schools, hospitals, bakeries.

The victims are the civilian population. Can they protect themselves at all?

Bank: It is the whole scorched earth programme that we have already witnessed in Syria in previous years. The aim is to make people's lives hell. Many civilians – families, children and old people – are fleeing to the north of the province. This increases pressure on Turkey to open the border or at least provide humanitarian aid. But the Turkish border remains closed. For the Assad regime, it is still a matter of intimidating people with massive violence. Assad's ground troops, however, have been considerably weakened. A ground offensive would only work if Iranian special forces and non-Syrian Shia militias were present. But these militias refuse to participate because they know that many of their fighters would die.

So what will happen in Idlib?

Bank: My short-term forecast is that there will be a very brutal war of attrition in Idlib, with limited military land gains for Assad and Russia. For more than three months now, since the end of April, they have been carrying out a massive air bombardment of Idlib without gaining much territory.

Bank: The fate of the people in Idlib really should concern us. My plea is that we finally give some serious thought to coming up with a solution for these some three million people who are virtually trapped.

So far everyone has shrugged their shoulders and done nothing.

Bank: Unfortunately, Europe is currently dominated by a political discourse that opposes the reception of refugees, especially from Syria. There must be safe escape routes from Idlib for the civilian population. After all, they are being bombed from above and harassed on the ground by brutal violent forces. In the future, these people will potentially be dominated again by Assad and his apparatus of violence. And on the other side is the Turkish military.

Andre Bank is provisional director of the GIGA Institute for Middle East Studies in Hamburg.

Iran is far more modern than many people realise: our view is clouded by media distortion and the overriding political narrative. The nation’s historic and cultural riches are ... END_OF_DOCUMENT_TOKEN_TO_BE_REPLACED

Saudi Arabia and its allies have agreed to set aside their differences with Qatar at a summit meeting of the Gulf Cooperation Council. The restoration of diplomatic relations ... END_OF_DOCUMENT_TOKEN_TO_BE_REPLACED

In an act of subversive diplomacy, Israeli singer and actress Liraz Charhi has recorded her latest album in secret collaboration with Iranian artists. By Carl Holm END_OF_DOCUMENT_TOKEN_TO_BE_REPLACED

In August 1978, four men set fire to the Cinema Rex in the Iranian city of Abadan, killing more than four hundred people inside. The event is said to have started the Iranian ... END_OF_DOCUMENT_TOKEN_TO_BE_REPLACED

Many in the West equate Middle Eastern music with the folklore of "A Thousand and One Nights". Tayfun Guttstadt demonstrates just how erroneous this is END_OF_DOCUMENT_TOKEN_TO_BE_REPLACED

END_OF_DOCUMENT_TOKEN_TO_BE_REPLACED
Social media
and networks
Subscribe to our
newsletter