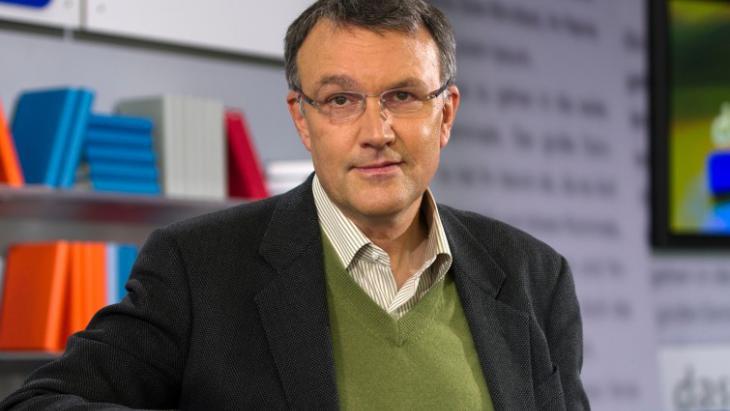 With the occupation of Ramadi and the ancient yet symbolic city of Palmyra, Islamic State (IS) now has control over about half of Syria. According to Middle East expert Michael Luders, an end to its advance is not in sight because IS knows that the US is reluctant to send in ground troops. Interview conducted by Peter Hille

Mr Luders, is the occupation of Palmyra an important victory for the Islamists or is it just new fodder for its propaganda machine?

Michael Luders: No, this is indeed a significant victory for Islamic State, because the city of Tadmur, which is close to the ancient ruins of Palmyra, is the first city under the control of Assad's army to be conquered by IS. So this is, psychologically speaking, a blow to the regime.

The oasis city of Palmyra is famous for its ancient temples and cultural treasures. Is that one of the reasons for the IS invasion?

Luders: IS is certainly also aware of the role this historical site plays in humankind's cultural heritage. There are grounds for suspecting that IS will sell everything it can transport away from the site. And there are strong indications that this ancient site, which has survived for over 2,000 years, will be blown up. This would be in line with the logic espoused thus far by Islamic State: everything that predates the inception of Islamic religion is regarded by its fighters and ideologists as un-Islamic and worthy of destruction. 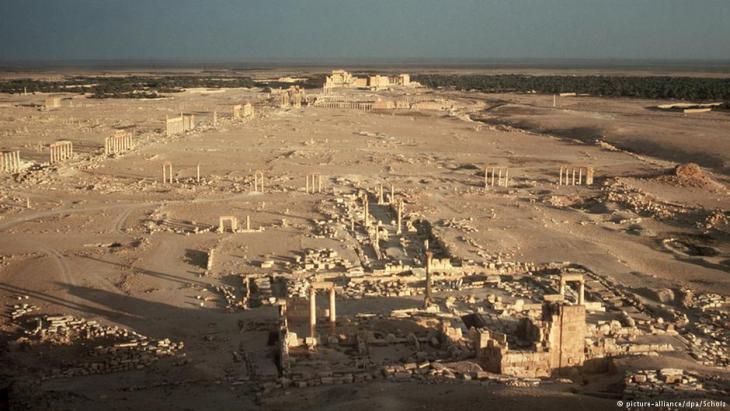 In the hands of the jihadists: since IS militias conquered the city of Tadmur and the nearby ruins of the city of Palmyra (pictured here), many fear that historical sites such as the Baal Temple dating from the first century BC are under serious threat of destruction. According to a governor of a Syrian province, the extremists have already destroyed ancient statues in a Palmyra Museum

What is the strategic importance of Tadmur, the city near the ruins, which has a population of 70,000?

Luders: You have to look at the geography: Tadmur, or Palmyra, is only 150 kilometres from Homs. From a geostrategic point of view, Homs is a major city where all north–south and east–west routes in Syria come together. In the past, Homs was an embattled city which saw fierce fighting. In addition, countless oil and gas fields are located between Palmyra and Homs. Therefore, Homs is likely to be IS's next target. If they take Homs, the Assad regime will be in trouble.

In neighbouring Iraq, IS has managed to seize the provincial capital Ramadi. For weeks we were being told that IS had been weakened. Was that untrue?

Luders: Yes, that was a completely exaggerated depiction primarily concocted by Western secret services. After Tikrit was recaptured by the Iraqi army and Shia militias, the CIA – but also the German foreign intelligence service (BND) – spread the word that Islamic State had its back against the wall. In hindsight, this analysis was wishful thinking. The truth is that Islamic State is currently in a phase of great self-confidence. It has understood that it can evade American airstrikes if it advances in very small units instead of convoys.

The Iraqi army reports that airstrikes have at least been partially successful: allegedly, the self-proclaimed IS caliph al-Baghdadi was seriously injured in the wake of a US airstrike in the spring and his deputy, al-Afri, was killed. Do you think these reports are reliable?

Luders: We have had such reports many times before. As an outsider, it's impossible to determine if they are true or just war propaganda.

Are Fallujah and Ramadi IS's gateway to Baghdad? Over a week ago, IS captured the city of Ramadi. A few days later, the strategically important city of Tadmur (with Palmyra) fell to the Islamists. Ramadi is situated in the predominantly Sunni province of Anbar. Both the Iraqi government and the USA decided to rely on Iraqi forces in the fight for Ramadi and were sceptical about accepting assistance from Shia militias who have the backing of Iran

If Palmyra is an important milestone for IS on its road to Damascus, how significant is Ramadi in terms of Baghdad in Iraq?

Luders: Ramadi is a mere 100 kilometres from Baghdad. This is almost like assuming control of Potsdam when your target is to take Berlin. Viewed from the West, Ramadi is the last major city on the way to Baghdad. IS will certainly try to target Baghdad. If it advances further, IS will be able to shell the city's airport. That would be a psychological defeat for the regime. However, it will be impossible for IS to actually capture Baghdad. IS is a purely Sunni extremist group and can only move around in areas predominantly inhabited by Sunnis.

What would one have to offer the Sunnis, who currently believe that between IS and the Iraqi government, IS is the lesser of the two evils?

Luders: That's the key question. Ultimately, there can be no military victory over Islamic State. As long as it is deeply rooted in Iraq's Sunni population, it can only be pushed back, reined in. Victory over IS is only possible if the moderate Sunnis in Iraq rise up against those in Islamic State circles who are corrupting them. However, they will only do that if the government in Baghdad, which is taking a purely pro-Shia line, reaches out to the Sunnis.

In this respect, a lot of lip service has been paid in recent months, but nothing has happened. The Sunnis are almost completely cut off from the allocation of resources in Iraq, which explains why they support IS. Don't forget, the military leadership of IS is not made up of bearded Islamists, but of supporters of the former Saddam Hussein regime, members of the military and secret services, who know exactly how to fight a war. They know that the Americans and others cannot win a war on the ground. In this respect, for the time being, time is on the side of Islamic State. 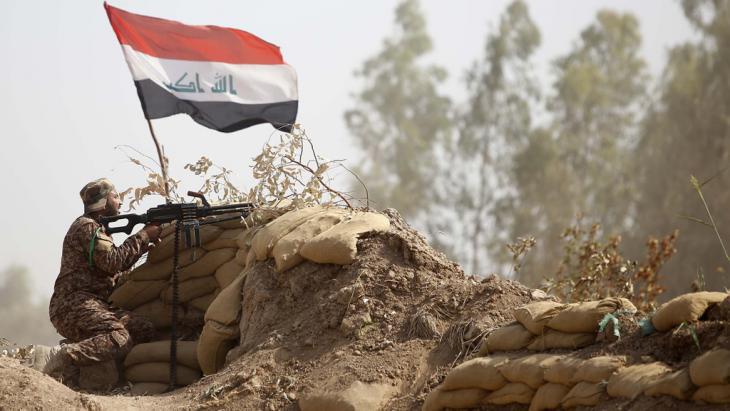 "After Tikrit was recaptured by the Iraqi army and Shia militias, the CIA – but also the German foreign intelligence service (BND) – spread the word that Islamic State had its back against the wall. In hindsight, this analysis was wishful thinking," says Middle East expert Michael Luders. Pictured here: an Iraqi soldier during the counter-attack on Ramadi

How can the continued advance of IS in Syria be stopped? Will the West have to enter into a pact with Assad?

Luders: There is no doubt that Bashar al-Assad and his regime are criminals. However, Bashar al-Assad is the only remaining person capable of containing IS, in Syria at least, using military power. The West has to make up its mind: does it want Assad's downfall, as proclaimed in the past? That would create a power vacuum in Damascus, which will be filled either by IS or by the al-Nusra front, the Syrian branch of al-Qaida. Since no-one in any Western capital favours that option, there is only one remaining alternative: to approach Assad and offer him military support. That would mean the West throwing its policy of recent years overboard.

Does the same apply to collaboration with Tehran?

Luders: We have seen a lot of movement in this respect. In reality, Washington tolerates everything Tehran is doing, above all the training of Shia militias fighting IS in Iraq. In Syria, things are a little different: in the absence of Shia militias like those in Iraq, Lebanon's Hezbollah does the fighting. However, there are also leading Iranian officers commanding parts of the Syrian army. Washington knows this, of course, and silently tolerates it, well aware that this is the better alternative to an occupation of Damascus by IS.

Dr Michael Luders is a journalist, political and business consultant and author of both fiction and non-fiction books. A political scientist and scholar of Islamic studies, Luders is also deputy chairman at the German Orient Foundation.

Home
Print
Newsletter
More on this topic
Interview with Iraqi political scientist Ghassan Al-Attiyah: A nation torn apartThe Syrian conflict: The illusion of a political solutionThe geopolitical situation in the Middle East: Between terror and the dissolution of orderSunni-Shia conflict: The enemy of my enemy
Related Topics
'Islamic State' | IS, Al-Qaida, Assad regime, Islam and the West, Jihadism | Jihadists, Syrian Civil War
All Topics

Recent efforts to rehabilitate Assad are setting a damaging precedent for accountability, just as the international community is expressing the need to hold Russia to account for ... END_OF_DOCUMENT_TOKEN_TO_BE_REPLACED

Nouara may be 65, but she is ready to join thousands of others who burn their ID and pay traffickers for the chance of a new life in Europe. Zineb Bettayeb reports END_OF_DOCUMENT_TOKEN_TO_BE_REPLACED

Education for girls and women is still possible in Afghanistan, says Reinhard Eroes of the Kinderhilfe Afghanistan initiative. In interview with Elisa Rheinheimer, he talks about ... END_OF_DOCUMENT_TOKEN_TO_BE_REPLACED

Locals in the Middle East have said European critics are showing bias and hypocrisy when they condemn Qatar. Observers agree that Qatar has had to deal with more criticism than ... END_OF_DOCUMENT_TOKEN_TO_BE_REPLACED

In Doha, Arabs from Morocco, Tunisia, Egypt and Algeria are gathering to celebrate the first ever FIFA World Cup to be held on Arab soil. The criticism from Europe? Over the top, ... END_OF_DOCUMENT_TOKEN_TO_BE_REPLACED
Author:
Peter Hille
Date:
Mail:
Send via mail

END_OF_DOCUMENT_TOKEN_TO_BE_REPLACED
Social media
and networks
Subscribe to our
newsletter