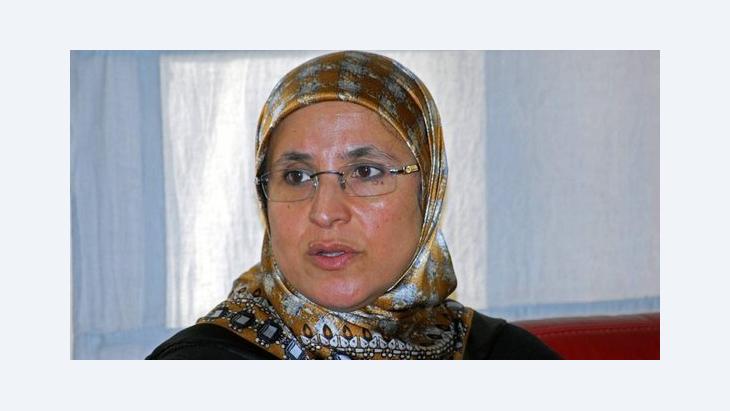 ﻿PJD politician Bassima Hakkaoui is the only woman to hold a ministerial post in Morocco's new, Islamist-dominated government. In conversation with Siham Ouchtou, the Minister for Solidarity, Women, Family and Social Development addresses the concerns of women's rights organizations over the government's gender equality policy

How do you feel about being the only female minister in the Moroccan government?

Bassima Hakkaoui: Of course I'm happy to have been entrusted with the job. The ministerial post does of course come with great responsibility, but it also gives me the opportunity to be involved in a government that is leading Morocco at a very special time. My inclusion as a woman could be viewed as a result of negotiations and the pressure that the parties felt themselves to be under – although by this I mean primarily time pressure, particularly during the last round of negotiations. Some of the ministers were also assigned different portfolios. In this regard I would like to say that politics certainly requires a solid political education. 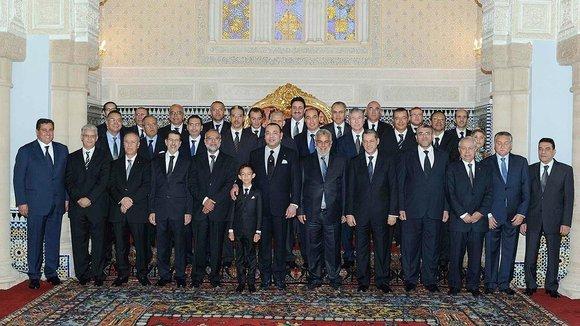 Politics as a purely male domain: Following parliamentary elections in Morocco, the lack of a quota for women in the distribution of ministerial posts has resulted in severe political under-representation. This deficit has been sharply criticized by women's rights activists

​​As far as the low representation of women is concerned, I think the time factor also had a lot to do with the fact that so few women were appointed to ministerial posts, although several key people were under discussion.

Hakkaoui: That undoubtedly played a role, because if there had been a willingness to nominate women, this would have certainly happened. In our party, the candidates were chosen by democratic means. We also committed ourselves to this process. An internal party committee was set up for this purpose. And the ministerial candidates were chosen in a secret ballot.

Did the selection process consider the ambitions to achieve a greater representation of women?

Hakkaoui: No. We had taken the decision to run a completely democratic process. Voting did not take place along gender lines, but rather each person voted for the candidate he or she felt was best suited to the post.

But the Prime Minister is a member of your party. Could you not have therefore stipulated a certain quota of women for the other parties, as was the case in the elections?

Hakkaoui: Yes, of course. The General Secretary of our party, Abdelillah Benkirane, did indeed impose conditions on the other parties, for example that if someone has already served as a minister for longer than one term of office, they should not be nominated again. And younger personnel should be promoted if they have not been working in another function over a longer period. And of course, a balance should be achieved through the presence of women. 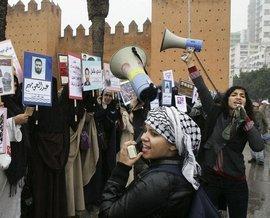 Bassima Hakkaoui of the Islamist Justice and Development Party sees no link between the nation's patriarchal social structure and politics. In fact, she says, the women's movement has already made some progress and created a "climate in Morocco that is generally more open to women"

​​But the problem lay in the concrete realization of these goals. Just a few days ago, female candidates who had already been proposed were dropped again. This applied in particular to two women whose nominations were rescinded for the reasons I stated, time pressure and the lack of political will. But I wouldn't say that the exclusion of women was intentional, because initially the parties put up several women.

Isn't that unconstitutional then? After all, the constitution stipulates that men and women should be treated equally, an approach that forms the basis of the elections that have just been held and produced the current government?

Hakkaoui: That may well be, although the constitution only states that the principle of equality is something that should be "aimed for", and we are working step by step to achieve this. I'd like to say, by way of proof that there is no contradiction here, that in the case of constitutional elections a nationwide list was only introduced to achieve a greater representation of women, not to promote the principle of equality.

On the subject of the elections, relatively few women were able to make their mark on the process. Do you have any ideas on how to boost the numbers of women in parliament?

Hakkaoui: Well firstly I'd like to praise the commitment of the women's rights movement, which instigated a concerted campaign to, on the one hand, influence the views of politicians, but also to create a climate in Morocco that is more open to women. But I think there's still a lack of transparency to this day. For example when efforts were being made to raise the proportion of women in parliament, the only solution put forward was the nationwide list, while the parties were not obliged to put up sufficient numbers of female candidates on a local level.

Don't you think that the low political representation of women is not only due to the fact that politics is dominated by men, but also due to patriarchal social structures?

Hakkaoui: Within the parties themselves it's mostly about power. And of course, men defend their constituencies against all competition at any price. Women are simply viewed as "intruders". In this respect I don't see any connection between politics and society, on the contrary: Society is demanding greater rights for women, while there are some men in positions of power who have a problem sharing this political power with women.

Let's talk about what you're going to be doing in your ministerial role. What are going to be your key points of focus at the Ministry for Solidarity, Women, Family and Social Development?

Hakkaoui: With respect to women's affairs, the first thing we have to do is hammer out a clear vision if we are going to properly improve the situation and lives of women in Morocco and empower female elites to realise their intellectual, economic and also their political potential. 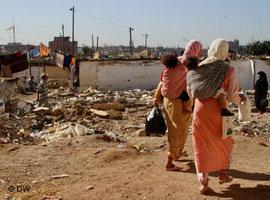 Equality as compulsory social need: Aiming for greater overall balance between the nation's various social strata will only be possible when the economic situation of women in modern Morocco is improved

​​This is the only way to create a democratic climate that will provide women with the possibility of assuming roles and tasks to which they are doubtless suited. This will also result in greater equilibrium between the different strata of Moroccan society.

Your views on Morocco's publicly expressed reservations on the UN Convention on the Elimination of All Forms of Discrimination Against Women have given rise to fears over how you will proceed in future on the question of women's rights. What is your party's stance on these reservations now?

Hakkaoui: Firstly, the expression of reservations was controversial, because the context in which they were issued was "unclear". We've always called for the inclusion of parliament in steps of this kind, after all, parliament represents the people. The news that misgivings had actually been expressed reached us via foreign sources. We were surprised by this circumvention of parliament.

For me personally, the problem lies in Article 9 of the Convention, because it could represent a curtailment of Morocco's sovereignty as a Muslim state with its system based on the principle of leadership of the faithful. And Article 16 contradicts Moroccan family law by giving men and women exactly the same rights and obligations in family matters. The Moroccan constitution sets down the inviolable basic principles of the Moroccan state. If an article of the Convention means that Morocco must submit to other laws, then this is an infringement of the principle of sovereignty.

And how will you, as minister of an Islamic-orientated party, try and bridge the gap between the ideological foundations of your party and the demands of the women's movement for comprehensive reforms?

Hakkaoui: We all share the Islamic foundations and characteristics, that is one of the basic principles of our society. After all, in Morocco we live in accordance with our laws and our constitution. Women's organizations are free to demand what they will – just as anyone in Morocco has the right to freely and openly express his views and call for whatever he likes. But in the end, the state must remain loyal to its constitutional and legal basic principles.

What's your stance on the abortion issue in Morocco?

Hakkaoui: As I've only recently assumed my post, I'm not yet in a position to take a stance on all issues. But the abortion question will certainly be one of my key focus areas. And in order to glean as clear a picture as possible of the situation, we will be consulting with specialists and affected women.

There have been reports of a new law allowing abortion in some cases. Is there any truth in this?

Hakkaoui: No, that's not correct, there is no new law on this yet. I can flatly deny that. But the question of abortion in Morocco will certainly be up for discussion when the time is right.

As Pride Month draws to a close, Richard Marcus delves into Saqi Books’ latest publication, "This Arab is Queer". Edited by Elias Jahshan, this anthology of essays is remarkable ... END_OF_DOCUMENT_TOKEN_TO_BE_REPLACED

Algeria's decision to unilaterally sever diplomatic ties with Morocco in August 2021 – days after the presidency announced in a statement their relations would be reviewed – was ... END_OF_DOCUMENT_TOKEN_TO_BE_REPLACED

Madrid's about-face on the Western Sahara conflict has enraged Algeria. Trade relations have been frozen unilaterally and a cut in gas supplies to Europe could be in the pipeline ... END_OF_DOCUMENT_TOKEN_TO_BE_REPLACED

With regard to gender justice, things look bleak in the Arab world. Laws typically discriminate against women, while national legislation all too often does not comply with the ... END_OF_DOCUMENT_TOKEN_TO_BE_REPLACED

This year’s Morgenland Festival opened with the premiere of Kinan Azmeh’s musical theatre piece, “Songs for Days to Come”, based on fifteen poems by contemporary Syrian poets. ... END_OF_DOCUMENT_TOKEN_TO_BE_REPLACED

A ceasefire has been in effect in Libya for the past year and a half. Yet after Russia's attack on Ukraine, another proxy war looms in Africa's most oil-rich country. Mirco ... END_OF_DOCUMENT_TOKEN_TO_BE_REPLACED
Author:
Siham Ouchtou
Date:
Mail:
Send via mail

END_OF_DOCUMENT_TOKEN_TO_BE_REPLACED
Social media
and networks
Subscribe to our
newsletter