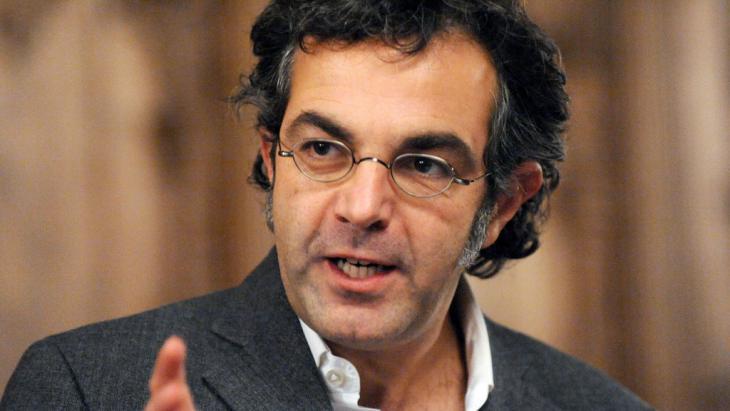 Interview with Navid Kermani
"One should take the religious façade seriously"

The writer Navid Kermani spent a week in mid September travelling through Iraq, visiting a number of different parts of the country. In this interview with Kersten Knipp, he speaks of his impressions of the country and some factors that have led to the rise of IS in Iraq

Mr Kermani, while you were in Iraq you also spent time in the capital, Baghdad. What impressions of the city did you take away with you?

Navid Kermani: Baghdad is a city in a state of emergency. There are several affluent districts where life is more or less normal and where security is good. But the rest of the city has been left to its own devices. While there are considerably fewer car bomb attacks these days than there used to be, lawlessness presides instead. The state is not visible, and that of course fosters criminality.

What was your overriding sense of the mood in the city?

Kermani: In the two-and-a-half days I was in Baghdad I didn't see anyone laugh. People are incredibly tense; they have suffered huge trauma – and not just in recent years either. The violence goes back much further: the eight-year war with Iran with up to one million dead, then the Gulf War in the early 1990s, the rule of Saddam Hussein itself – it is estimated that during his time in office, between two and four-and-a-half million Shias were killed – then came the invasion of 2003 and the ensuing chaos.

... and also apparently the consequences of cultural devastation.

Kermani: Yes. In the old museums and palaces, everything has been stolen or destroyed. Just remember the "Ali Baba" story: it is said that US soldiers encouraged Iraqis to plunder their museums. So it's all gone. If such chaos, such anarchy is created over the years, it also results in moral corruption. It doesn't happen overnight, but at some point, after layer upon layer of violence over a period of many years, it also leads to a loss of inhibitions the like of which we are now seeing in individuals in Iraq. 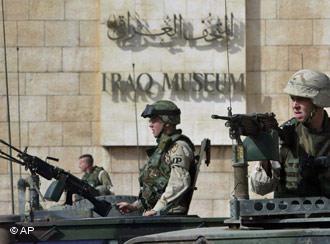 US soldiers outside the Iraq Museum in Baghdad in 2003. When Baghdad fell to the US-led coalition that toppled Saddam Hussein, the world watched in horror as looters ransacked the museum that housed some of the nation's most prized treasures. There were reports at the time that US soldiers had facilitated the looting, breaking down doors and encouraging people to loot with the words "Go in, Ali Baba, it's yours!"

So where do Iraqis look for orientation in their lives? Are there any norms?

Kermani: They are increasingly looking to their own communities. Relations are increasingly characterised by ethnicity. The old multicultural Baghdad – up until the 1940s, the Jews represented the largest and leading intellectual population group in the city – this multicultural Baghdad no longer exists. Now, people rely on the other members of their denominational group. Solidarity prevails within the group; people help each other. On the other hand, people are less likely to help members of other denominations. The sense of togetherness has dwindled to almost nothing.

What is your opinion of the role of Prime Minister Nouri al-Maliki, who stood down in August? Was it not his duty to reconcile the various denominations with each other again?

Kermani: He did exactly the opposite – and pretty much all the dialogue partners I've met accuse him of this. The supreme Shia clergy, including Grand Ayatollah al-Sistani, explained to me that Maliki deliberately caused this situation. He deliberately played the denominations off against each other in order to sew chaos so that he could become a new Saddam and present himself as the new strongman. But this plan was a catastrophic failure.

And the terrorist organisation Islamic State (IS) took advantage of this situation.

Kermani: Yes. Members of Saddam Hussein's old elite are highly active within the movement. That's generally the case with fundamentalism: many of its leaders came and come from a secular background. They were doctors, for example, or engineers. And if you look at the biographies of many IS leaders now, you'll see that often, they were not graduates of theological universities, but people leading secular lives. But they then turned against tradition and now want to return to an imaginary primordial beginning.

What sort of relationship do these people have with religion?

Kermani: One should take the religious façade seriously. Many European jihadis, many jihadis active on the ground and Wahhabism, which has contributed to the fact that this ideology was able to spread: all of that is religious; it should be taken seriously. It's a religious thought process. However, this process is turning against its own tradition. It is – and this is the protestant element involved – doing away with tradition in order to return to the basic scripture. It is, therefore, an anti-traditional movement. 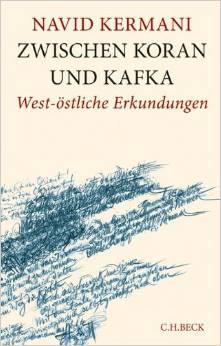 Navid Kermani is a multi-award-winning writer and scholar of Middle Eastern and Oriental Studies. He undertook his latest trip through Iraq for the weekly news magazine "Der Spiegel". His new book has been published by C.H.Beck: "Zwischen Koran und Kafka: West-östliche Erkundungen." (Between Koran and Kafka. West-East Explorations)

What impact is IS terror having on Iraq's ethno-religious fabric?

Kermani: It is obvious that the Sunni-Arab population has not acted with solidarity towards the Shias, Christians and Yazidis. Levels of mistrust are very high. People are afraid to return. They say, "we've lived alongside these people as neighbours for centuries, but when we had to flee, they plundered our houses." I don't know how many people this applies to. We know that IS is taking action against anyone who opposes it – including the Sunnis.

People are killed immediately. I can't say whether all the stories I've been told are accurate. But the fact is that the people are afraid to go back. And this is precisely the seed of the terror. The IS militia may disappear one day, but the mistrust will remain. And this, I fear, will lead to the irretrievable loss of multi-denominational Iraq, in the central regions of the country at least.

How exactly is that possible? What are the strategies of IS?

Kermani: I believe there's a difference between the current generation of jihadis and the 9/11 attackers. The latter were highly educated people with successful secular biographies. To a certain extent this was an elite group. But the people now joining the jihad from the West are – from what we know about them – mostly loser types or in any case not from particularly well-educated social strata. And these people then get unbelievable power: they get a machine gun, they suddenly become rulers, they can help themselves to the women. A considerable number of them have criminal backgrounds and convert to Islam after some kind of revelatory experience. And then they can exert the same violence as before.

They are allowed to take everything – and suddenly, they are also acting legally. That's a huge fascination. And now all this is also being legitimised along religious lines. Large amounts of adrenalin are a factor here. I also believe that Islamic State (IS) terrorises its own militia, sucking them so far down into the terrorist milieu that they can no longer return to a normal life. In this way, they aim to destroy what has for decades been a normal coexistence.

These are mechanisms of complete disinhibition. The same thing can be observed happening in other civil wars. When someone loses his inhibitions to this extent and does whatever he wants, people don't want to live alongside him anymore. This means it is possible to create an historic caesura with relatively few people, as is the case in Iraq.

Any reconciliation between Turkey and Syria’s Assad regime would have disastrous consequences for many Syrians, explains Syria expert Kristin Helberg END_OF_DOCUMENT_TOKEN_TO_BE_REPLACED

Iraq bears the scars of decades of conflict and has seen its antiquities plundered, yet the House of Manuscripts' collection has managed to survive END_OF_DOCUMENT_TOKEN_TO_BE_REPLACED

As Syrian camps housing families of Islamic State fighters get more dangerous, there are calls to bring children out, even if the mothers don't want to go. The idea of separating ... END_OF_DOCUMENT_TOKEN_TO_BE_REPLACED

Morocco has taken the 2022 World Cup by storm, with the northwest Africans reaching the semi-finals for the first time in their soccer history. As the knockout match approaches, ... END_OF_DOCUMENT_TOKEN_TO_BE_REPLACED

The Islamic Republic has been unable to quell the civil unrest that erupted three months ago, after Mahsa Amini died after being detained for violating hijab rules. Now the ... END_OF_DOCUMENT_TOKEN_TO_BE_REPLACED

The Kurds are under attack from two sides: from Turkey, and from Iran. The situation in their territories in northern Iraq is becoming increasingly desperate. Birgit Svensson ... END_OF_DOCUMENT_TOKEN_TO_BE_REPLACED
Author:
Kersten Knipp
Date:
Mail:
Send via mail

END_OF_DOCUMENT_TOKEN_TO_BE_REPLACED
Social media
and networks
Subscribe to our
newsletter