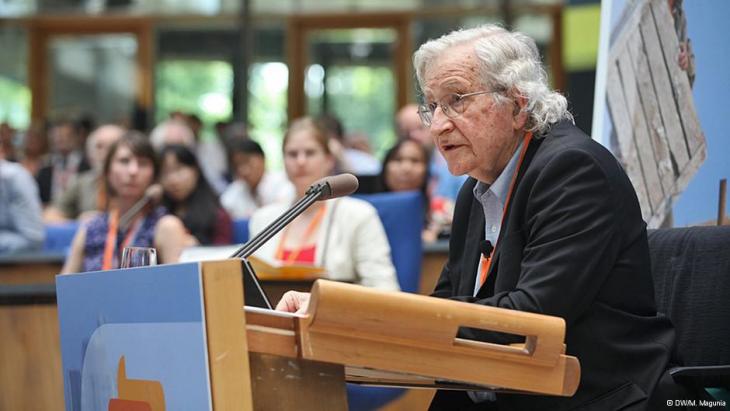 ''The West Is Terrified of Arab Democracies''

Noam Chomsky is one of the major intellectuals of our time. The eighty-two-year-old American linguist, philosopher and activist is a severe critic of US foreign and economic policy. Ceyda Nurtsch talked to him about the Arabic spring in its global context

Mr. Chomsky, many people claim that the Arab world is incompatible with democracy. Would you say that the recent developments falsify this thesis?

Noam Chomsky: The thesis never had any basis whatsoever. The Arab-Islamic world has a long history of democracy. It's regularly crushed by western force. In 1953 Iran had a parliamentary system, the US and Britain overthrew it. There was a revolution in Iraq in 1958, we don't know where it would have gone, but it could have been democratic. The US basically organized a coup. 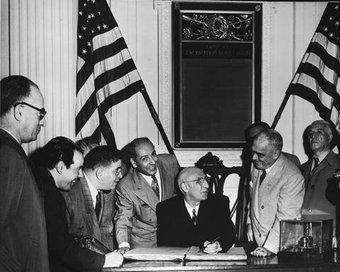 False friends: Iran' democratically elected Prime Minister Mossadegh during a visit in the US in 1951, two years before the CIA's coup d'état that ousted him

​​ In internal discussions in 1958, which have since been declassified, President Eisenhower spoke about a campaign of hatred against us in the Arab world. Not from the governments, but from the people. The National Security Council's top planning body produced a memorandum – you can pick it up on the web now – in which they explained it. They said that the perception in the Arab world is that the United States blocks democracy and development and supports harsh dictators and we do it to get control over their oil. The memorandum said, this perception is more or less accurate and that's basically what we ought to be doing.

That means that western democracies prevented the emergence of democracies in the Arab world?

Chomsky: I won't run through the details, but yes, it continues that way to the present. There are constant democratic uprisings. They are crushed by the dictators we – mainly the US, Britain, and France – support. So sure, there is no democracy because you crush it all. You could have said the same about Latin America: a long series of dictators, brutal murderers. As long as the US controls the hemisphere, or Europe before it, there is no democracy, because it gets crushed.

So you were not surprised at all by the Arab Spring?

Chomsky: Well, I didn't really expect it. But there is a long background to it. Let's take Egypt for instance. You'll notice that the young people who organized the demonstrations on January 25th called themselves the April 6th movement. There is a reason for that. April 6th 2008 was supposed to be a major labour action in Egypt at the Mahalla textile complex, the big industrial centre: strikes, support demonstrations around the country and so on. It was all crushed by the dictatorship. Well, in the West we don't pay any attention: as long as dictatorships control people, what do we care! 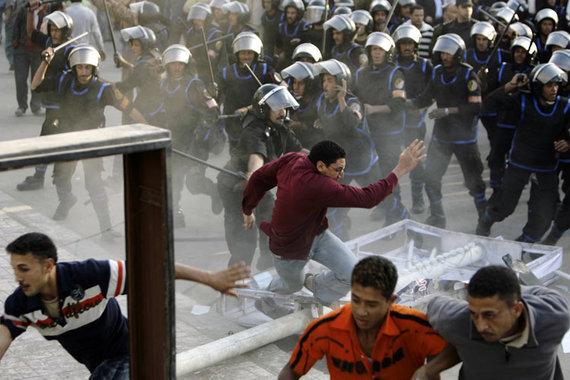 "Efforts to create democracy": On 6 April 2008 Egyptian workers, primarily in the state-run textile industry, striked in response to low wages and rising food costs. Strikes were illegal in Egypt, and the protests were eventually crushed

​​But in Egypt they remember, and that's only one in a long series of militant strike actions. Some of them succeeded. There are some good studies of this. There is one American scholar, Joel Beinen – he is at Stanford – he has done a lot of work on the Egyptian labour movement. And he has recent articles and earlier ones, in which he discusses labour struggles going on for a long time: those are efforts to create democracy.

Obama's predecessor, George W. Bush, claimed to cause a domino effect of freedom with his policy of the "New Middle East". Is there a relation between the uprisings in the Arab world to the policy of George W. Bush?

Chomsky: The main theme of modern post-war history is the domino effect: Cuba, Brazil, Vietnam… Henry Kissinger compared it to a virus that might spread contagion. When he and Nixon were planning the overthrow of the democratically elected Allende in Chile – we have all the internal materials now – Kissinger in particular said, the Chilean virus might affect countries as far as Europe. Actually, he and Brezhnev agreed on that, they were both afraid of democracy and Kissinger said, we have to wipe out this virus. And they did, they crushed it.

Chomsky: I read the article, it's very good. Robert Fisk is a terrific journalist and he really knows the region well. I think what he means is that the activists in the April 6th movement don't care about the United States. They have totally given up on the US. They know the United States is their enemy. In fact in public opinion in Egypt about 90 per cent think that the US is the worst threat that they face. In that sense the USA is of course not irrelevant. It's just too powerful.

Home
Print
Newsletter
More on this topic
Interview with Georges Corm: Double StandardsWho Is Hidden beneath the Burqa? An Appeal to the West
Related Topics
Arab Spring, Arabellion, Democracy and civil society, Human rights, Islam and the West, U.S. policy in the Middle East
All Topics

Napoleon Bonaparte’s 1798 invasion of Egypt represented the first modern attempt to incorporate an Islamic society into the European fold. Although the expedition was a military ... END_OF_DOCUMENT_TOKEN_TO_BE_REPLACED

The outpouring of solidarity worldwide following the violent death of George Floyd should prompt us to step back and fundamentally question racist structures and privileges based ... END_OF_DOCUMENT_TOKEN_TO_BE_REPLACED

Has it ever crossed your mind that you are eating plastic on a daily basis? That you are drinking it? Apart from the thousands of trending pictures and videos on social media of ... END_OF_DOCUMENT_TOKEN_TO_BE_REPLACED

Libya's plight resembles that of other war-torn countries in the Greater Middle East: internal conflict has spiralled out of control because of misguided foreign intervention. ... END_OF_DOCUMENT_TOKEN_TO_BE_REPLACED

The Arab world suffers from a system in which people are intolerant of "the other". This racist environment contributes to the growth of hostility and antagonism towards anyone ... END_OF_DOCUMENT_TOKEN_TO_BE_REPLACED

Comments for this article: ''The West Is Terrified of Arab Democracies''

The Egyptians remember all the injustices, the West simply "forgets". Barack Obama is terrified of Arab democracies... Right! The West is ALL BAD. The Arab World is morally superior... I mean, how ridiculous is that?! I can't believe Chomsky is supposed to be "one of the world's leading intellectuals" -- even I know better than him!

Chomsky, of course, is 'left' - but he is right in his assessment of the fatal consequences of the West's imperial interventions. And the Mossadegh 'putsch' is THE example for illegitimate and crude realpolitik that is morally despicable, and that reverbaretes still today and creates problems for world politics hard to solve: namely, the Islamic republic and its destructive regional politics as an anti-Shah regime. Had the US not intervened (for commercial and economic, and of course, ideological reasons) it is likely there would be no crazy Mullahs creating havoc in Mideast today. It's a true realpolitik rewriting of the 'Frankenstein' tale.

The "Arab Spring" was fomented by the Salafists intent on establishing a Sunni Caliphate. The Shari'a is completely antithetical to the Western Sense of Democracy. My guess is that Chomsky means a totalitarian style "people's Democracy" as practiced by North Korea.

The problem that was not tackled in this interview is the tendency for overthrowen Arab regimes to be replaced not by democratic governments, but by Theocracies or Islamic-dominated administrations that tend to be even worse than what preceeded them. Iran (and yes, I know Iran is not Arab) overthrew the Shah for being repressive, yet Khomeini's regime killed more persons than the Shah's SAVAK ever did. This is comething that also needs to be addressed.

END_OF_DOCUMENT_TOKEN_TO_BE_REPLACED
Social media
and networks
Subscribe to our
newsletter