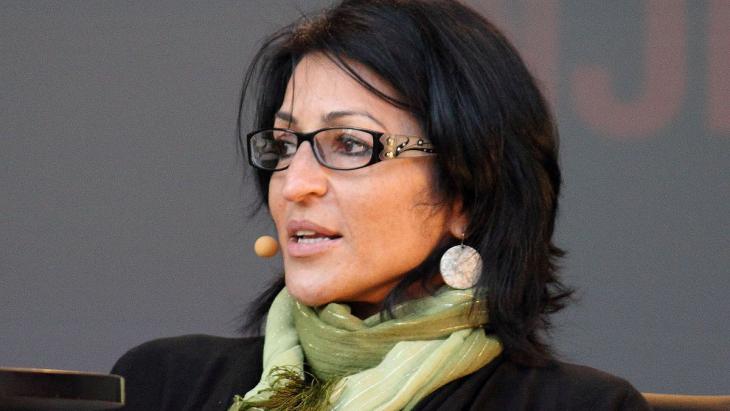 With ″Mornings in Jenin″ and ″The Blue Between Sky and Water″, Palestinian American writer Susan Abulhawa has had two bestsellers in Germany. She writes about misery and trauma, love and the Palestinians′ joie de vivre. In interview with Miriam Quiering, she talks about the way literature is able to express humanity, the German fear of criticising Israel and how stories keep the Palestinian people alive

The narrator of your second novel ″The Blue between Sky and Water″ is the boy Khaled. He has got so-called locked-in syndrome, which means that he is paralysed but at the same time completely conscious. Why did you choose him as a narrator?

Susan Abulhawa: I didn′t choose him, Khaled chose himself. It started out as his story, but as I started to write, I became more interested in the women around him, the women of his family. And so the story became about them – they are the main characters. Khaled is a very minor character, even though he is very important. He is a constant voice that binds the entire novel. I think he has a symbolic function as well, but I prefer readers to bring their own interpretation to Khaled′s life.

Khaled is deeply meaningful to me and on multiple levels to the characters in the book, to Palestine, to Gaza and to history. There are some places in the book where he talks about these connections, between the living and the dead, between history and time and especially about the sense of time not being linear.

The novel is about four generations of women. They are all strong characters. You yourself are a strong woman. For years there have been debates in Europe concerning the situation of Muslim women, often pointing the finger at things like the headscarf as a symbol of religious oppression. Do you think Islam oppresses women?

Abulhawa: No. I see women being oppressed. I don′t think they are oppressed by a religion. I think people oppress people. People do it in the name of many things, sometimes they do it in the name of religion, but usually it is done in the name of patriarchy. I think that the interpretation of the headscarf as a sign of oppression comes from otherising and dehumanising Muslims. It also demonstrates a failure to understand our way of life and what it means to inhabit the body of a Muslim woman.

We are all complicated individuals and full of contradictions. The life of Muslim women is no exception. It′s tragic when people look at Muslim societies and decide “Oh, this is what it is”, yet they have no idea about the culture and way of life in those countries.

Do you think that your books can help change opinions about Muslim women here in Europe?

Abulhawa: I think books forge connections, fostering mutual understanding between people. It addresses the universal nature of humanity and not necessarily what it means to be a European, a Muslim, an American or an Arab. Books – and novels in particular – have the power to do that. It′s so important to every culture to tell your story, your people′s story. Because that′s the face of who you are. What makes you German isn′t just that you live in this corner of the globe. You are German because you live here; everything that has happened here over the centuries has brought you to this moment. And it′s this history, your customs, your food, your culture and your ideas that make you who you are. And the way you express that to the world is through your art.

Do you feel that authors such as yourself have a mediating role to play in the conflict between Palestinians and Israel?

Abulhawa: Firstly, it is not a conflict. A conflict occurs between two usually equal parties who disagree about something. Colonisation, colonialism and neoliberalism are not conflicts, they are forms of oppression – of ethnic cleansing and erasure. And the situation between Israel and the Palestinians is an issue of settler colonialism and apartheid. We are not mediators in this process.

Yet literature is a facet of society and when you belong to a people whose very existence is denied, to whom the world says ″you′re not real, you do not exist″, writing your story and creating your art becomes an act of decolonisation. What Palestinian art and Palestinian literature does in this sort of political context is to assert our presence, our existence, our humanity and our ancient history, all of which belong to us.

Have you noticed any difference between the reactions of audiences in the U.S. and Germany to your readings?

Abulhawa: Of course. Firstly people are very diverse, but there are certain unique things that characterise different societies. In Germany I feel there is a certain reticence and fear. On the one hand Germans are tired of being the bad guys; you don′t want to be seen that way. And even though you think that what Israel is doing is wrong, you are really scared of criticising Israel.

At the same time, Germany has been extremely receptive to my books and it′s great that Germany has a genuine reading culture. It′s one of the things that makes your society so magnificent, so resilient. You can tell by the number of books that people buy and by the number of people that attend readings, the questions they ask. Searching, probing. There is a real interest in knowing, yet at the same time there is also fear and hesitation.

You are co-founder of the campaign ″Boycott, Divestment and Sanctions″, which calls for a boycott of goods from the occupied Palestinian areas. This campaign and similar political initiatives against Israel′s settlement policy often face strong criticism in the USA and Germany. They are blamed for being anti-Semitic. How do you handle accusations like that?

Abulhawa: I think the accusation of anti-Semitism is generally used to shut people up. The ″Boycott, Divestment and Sanctions″ campaign is actually grounded in international law. Boycott has a long and noble heritage as a non-violent way of resisting oppression. When you consider that Palestinians have literally been wiped off the map... everything we have has been taken, even our history is being perverted and our food and our clothes are being claimed as Israeli. It is an existential struggle: by appealing to the world to join our boycott we are demanding our dignity.

We are neither trying to push people into the sea nor kill them. BDS is simply asking for Palestinians to be afforded the same rights, the same dignity to live in their homeland as all those foreigners who come and live in our country. This demand cannot be challenged. It′s a moral demand based in international law, founded on the very principles of human rights and dignity.

The critics′ last resort is therefore to cry ″anti-Semitism!″ – mention that word and you can forget all the other arguments.

Susan Abulhawa is an author and human rights activist. She founded the NGO "playgrounds for Palestine", which has to date erected 20 playgrounds in Palestinian areas and refugee camps.

Anti-Semitic motifs have no place at Germany’s documenta art show or anywhere else in the world, stresses Meron Mendel, director of the Anne Frank Educational Centre in Frankfurt ... END_OF_DOCUMENT_TOKEN_TO_BE_REPLACED

Fifty-five years after Israel began occupying Palestinian lands, it is more difficult than ever to imagine a way out. The seeds of the two-state solution that were planted by ... END_OF_DOCUMENT_TOKEN_TO_BE_REPLACED

Yazan Khalili is spokesman for The Question of Funding, a collective of artists taking part in the leading German contemporary art festival Documenta 15. Here, he responds to ... END_OF_DOCUMENT_TOKEN_TO_BE_REPLACED

When times are tough, the exchange of ideas and perspectives becomes especially important. It takes dialogue. And at Deutsche Welle, we need distributors and cooperative partners ... END_OF_DOCUMENT_TOKEN_TO_BE_REPLACED

Every week, Jewish, Christian and Muslim youths meet to sing together. And they do so in the middle of a city where Israelis and Palestinians are often at loggerheads. Anja Koch ... END_OF_DOCUMENT_TOKEN_TO_BE_REPLACED

A law has been passed by the Iraqi parliament that criminalises any contact with Israel. In the midst of heated debates on the subject, one crucial aspect has been forgotten: the ... END_OF_DOCUMENT_TOKEN_TO_BE_REPLACED
Author:
Miriam Quiering
Date:
Mail:
Send via mail

END_OF_DOCUMENT_TOKEN_TO_BE_REPLACED
Social media
and networks
Subscribe to our
newsletter