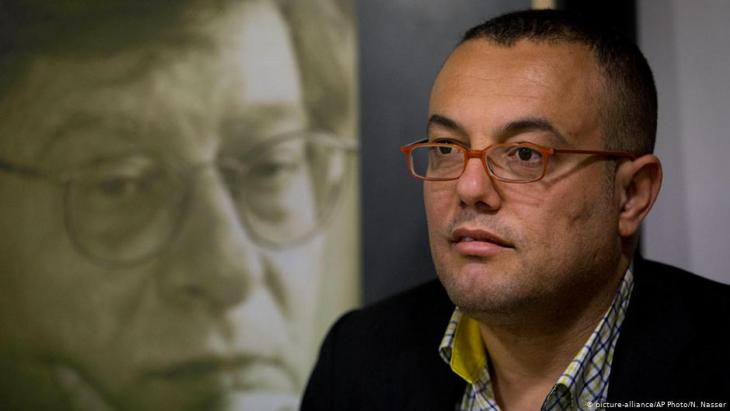 The foyer is hung with pop-art pictures of Palestinian poets and thinkers such as Mahmoud Darwish and Edward Said. The Palestinian Ministry of Culture in Ramallah is keen to present itself as open-minded, modern – just like its new boss, Atef Abu Saif. Interview by Inge Gunther

Atef Abu Saif, 46 years old, grew up in Gazaʹs Jabaliya refugee camp. There he lived, teaching policy at Al Azhar University in Gaza City, writing books (among others "The Drone eats with me", a diary of the 2014 Gaza war) and guest columns for The Guardian and The New York Times. Until a brutal assault on 18 March, when masked thugs attacked the Fatah supporter, beating him half to death and smashing his fingers – in their eyes, fitting punishment for someone who dared criticise Hamas. In April Atef Abu Saif was appointed by President Mahmoud Abbas to serve as Minister of Culture in the new Palestinian Authority cabinet.

How is your right hand doing?

What exactly happened on 18 March? Do you know who was behind it?

Abu Saif: I donʹt like to think about it. For me this event belongs to the past. All I can say is that I was attacked by about 25 men. I had just visited a friend. He asked them, "Who are you?" and they replied, "Hamas."

It happened during the "We want to live" protests, when people critical of Hamas went out on to the streets…

Abu Saif: Indeed. During that period I gave four, five interviews to Arab media. I spoke not as Fatah but voiced my opinion as a concerned citizen: that these are legitimate demonstrations, where young women and men ask for a better life. I defended their position and said we should support these demonstrations. Nobody in Gaza spoke up for them in public. I was the only one. Most of those young people were my students. Many were humiliated and tortured – I saw them a few days after they were released from prison. 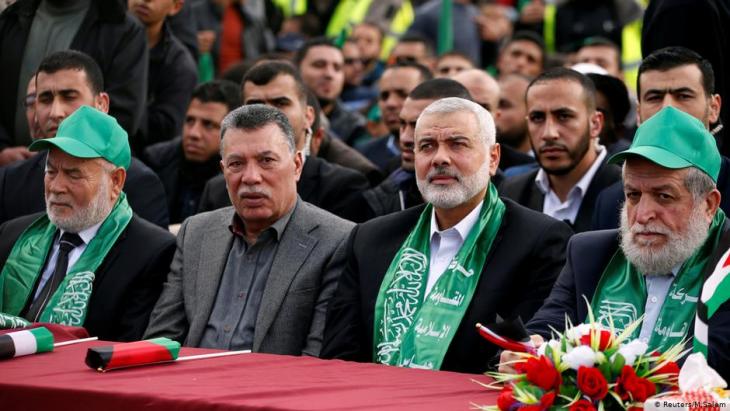 Atef Abu Saif: "It cannot be that we level the roads or build a hospital and then Ismael Haniya comes along as the highest Hamas representative and cuts the ribbon. We are not giving up on Gaza, these are our people. But we do not want to finance the Hamas regime"

Meaning they were beaten up by the police?

Abu Saif: They werenʹt just beaten. They were hung up by their feet from the ceiling, like in a slaughterhouse. I declared publicly that such treatment was inhumane.

Can you imagine returning to Gaza while Hamas is still in power there?

Abu Saif: Listen, for us Palestinians, Palestine remains our only home. I cannot imagine living in Europe. Before this most recent incident, I had already been arrested 50 times by Hamas. Whenever anything happened they would call me in and lock me up for a couple of days.

That means a life in constant fear.

Abu Saif: Of course. Hamas is the jailor of one huge prison called Gaza – that is the unspoken truth. There is an Israeli siege and a Hamas siege and they co-operate to contain the people of Gaza. But I will not let them decide whether I can live in my country. Even if they kill me.

Where do you derive your courage from?

Abu Saif: Hamas would like to see all secular liberal intellectuals leave Gaza. If you believe in an idea you should fight for it.

What are you fighting for?

Abu Saif: In 1948, my grandmother was forced to leave her wealthy life in Jaffa behind. She ended up in the Jabaliya refugee camp. During the 1967 war her husband, my grandfather, fled to Jordan. She refused to go with him. I will always remember what she told us children: "We will not make the same mistake that we did during the Nakba again." Gaza may be the dirtiest, most overpopulated place on earth. A place that is controlled by fundamentalists. Gaza may be all this, but it is the place where I feel at home.

Essawi Frej, the first ever minister of Arab origin in an Israeli government, explains in interview with Markus Bickel what can be achieved in a coalition of opposites END_OF_DOCUMENT_TOKEN_TO_BE_REPLACED

Hisham's Palace in the West Bank was recently renovated and is now opening to the public. Palestinians hope it will draw tourists. ... END_OF_DOCUMENT_TOKEN_TO_BE_REPLACED

Ibrahim Issa runs an extraordinary school where he prepares Palestinian students for a future of peace. It isn't what he originally planned to do with his life, but as things ... END_OF_DOCUMENT_TOKEN_TO_BE_REPLACED

Sudan is the exception to the rule in the United Arab Emirates’ counter-revolutionary playbook, writes James M. Dorsey. In contrast to Egypt or Yemen, where it went out of its way ... END_OF_DOCUMENT_TOKEN_TO_BE_REPLACED

On 10 September, WDR, the public broadcaster in Germany's most populous western state, introduced the 28-year-old journalist Nemi El-Hassan as the new presenter of its popular and ... END_OF_DOCUMENT_TOKEN_TO_BE_REPLACED
Author:
Inge Günther
Date:
Mail:
Send via mail

END_OF_DOCUMENT_TOKEN_TO_BE_REPLACED
Social media
and networks
Subscribe to our
newsletter