Afghanistan: Hope and Beauty in a War-torn Land

Since the mid-1980s, acclaimed German photojournalist Ursula Meissner has been regularly traveling to Afghanistan. Her photographs go beyond the war to show people's daily lives. Interview conducted by Petra Tabeling

For the past 20 years, Ursula Meissner has been regularly traveling to Afghanistan. This country pushed me to my personal limits, she says

​​Your book "Afghanistan: Hope and Beauty in a War-torn Land" has just been published. This is the fruit of many trips to Afghanistan. What motivated you to travel to this country so often?

Ursula Meissner: At the time, I was traveling there with a TV crew from ZDF (a German public television network). I also made a photo essay for the TV production. A Mujahedin leader took me along – dressed as a man – with a group through the mountains, but only after he kneeled down in front of me and checked my ankles to see if I was strong enough for the trek. At the time, I didn't know what might be in store for me. The Russians were still in Afghanistan and we sometimes had to walk for 14 hours, even at night. I was young and I saw refugees and war for the first time.

When we arrived at the front, bombs were falling and I was terrified. I thought I was going to die and I would never get out of there. But this "never" has become 18 trips because I can't get my encounters with people there out of my head. Dressed as a man, I also had an opportunity to approach women and talk with them. People are open because they feel that we Germans are close to them. We are welcome there.

I also had the support of Mujahedin commander Abdul Hak. He saw me as very courageous, especially since I'm a woman. That was a significant advantage. These experiences have had a formative influence on me.

To what extent have these experiences changed you?

Careful selection of images: there is so much more to Afghanistan than just war, says Meissner.

​​Meissner: I grew up with a sheltered way of life in a village tucked away in rural Germany. My parents were refugees in World War II. If you haven't experienced that yourself, you can't comprehend it. And I could only understand the stories told by my parents after I had experienced first-hand what it means to be afraid.

I didn't know until then what it was like to run for 10 hours at night, frightened and hungry, to sleep on the ground and get by with very little water – so many hardships. I sometimes felt desperate and didn't want to keep going. Afghanistan pushed me to my personal limits. If I had known what was in store for me, I'm sure I wouldn't have done it. I wouldn't have had the courage. But I was able to accomplish a great deal through my work, and that's precisely what renewed my courage.

There are hardly any photos of war in your book. Why is that?

Meissner: Because it would be wrong to just show pictures of war. There is so much more in Afghanistan. I want to convey the hope and positive aspects. And that normally doesn't make headlines. I want to enhance our understanding of Afghanistan. I have collected things from my travels that you don't normally read about or see. Although it's very difficult for people to secure their survival during 30 years of war, there remains a certain amount of normalcy in this chaos – everyday life goes on. Thanks to my photos - which purposely do not show images of war – I've managed to reveal this aspect.

So Western media are highly biased in their reporting?

Meissner: If there is an attack on German troops, this prompts a constant stream of stories, and they report that the Taliban is responsible. But they don't talk about who the Taliban are, what they do or why a farmer becomes a mercenary. These topics are extremely fascinating because they pave the way for addressing issues like why the reconstruction efforts are ineffective and why women and children freeze to death during the winter and no donations arrive. Why are things still progressing so slowly after five years?

In my book, for instance, I witnessed the training of police officers. Since most of them are illiterate, it's very difficult to train them. What's more, their vocational training lasts only a few weeks, and if a policeman doesn't get paid, he has to find other sources of income. This leads to continued unrest and attacks, even on aid convoys.

You travel through Afghanistan as a freelance photojournalist, and you've experienced attacks and a kidnapping. How difficult is it, particularly as a woman, to work in this country? 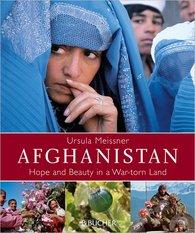 Hope and Beauty n a War-torn Land: Ursula Meissner's book was published in English, too

​​Meissner: When a journalist travels with the German army, he naturally sees other things than if he was traveling alone. When I'm in Afghanistan, I can travel virtually everywhere, as long as I don't end up in a hotspot where there is fighting. As a foreigner, I enjoy certain privileges, but it's very difficult for Afghan journalists. I don't wear a headscarf and I have a somewhat domineering manner. This allows me to gain respect among men. They see me as sexless. And I'm independent because I don't travel with the military. Criminals and kidnappings are dangerous, however. I don't travel without an assignment, but I do take these trips at my own risk.

In your book, however, you say that Afghanistan could become an ideal travel destination?

Meissner: I've just returned from Bamiyan. The beauty of this area is overwhelming and it left me speechless. You forget that there are still minefields there. Even though the Buddha statues have been destroyed, it could become a fashionable destination like the Taj Mahal in India. It's still a dangerous region, but when the Taliban are gone and it's safer there, this could become a popular place.

The United Nations say that it will take at least 20 years before Afghanistan has recovered from the war and the crises. How long will it take, in your opinion?

There is intense poverty in many provinces. It feels like the world has come to a halt, says the photojournalist

​​Meissner: Young people in the country say that first the older generation has to die. They listen to pop music, go to cafes with their baseball caps and their mobile phones, and tend to be more oriented toward Western culture. But when they come home, the father is the dominant figure. The head of the family still makes all the decisions and the younger generation suffers from that. Television will accelerate things, and it will come much faster than expected.

Meissner: I've just returned from Panjab Province, a region that most travelers never see. While I was there, I visited a hospital that has been set up by an aid organization. It's very poor there and it feels like the world has come to a halt - except for the fact that many houses have satellite antennas. People use two-thirds of their money to buy fuel for their generators so they can watch television every day.

This provides a connection to the world in a region where people still use wooden plows and where the women wash their laundry on the shoreline. Suddenly, people are exposed to things that they didn't even know existed. This has positive and negative consequences. It also leads to envy and dissatisfaction because they possess none of the things that they now see every day on television. Hunger still remains a major problem.

On the other hand, life is lively in Kabul, with its chic hotels and boutiques. Everyone hopes that things will move forwards, but none of this reaches the provinces. The Afghans can't manage it all on their own. The main thing is to help improve security structures in Afghanistan.

Ursula Meissner has traveled as a freelance photographer to war-torn and crisis regions around the world for 20 years. From Afghanistan to Sierra Leone, from Kosovo to Iraq, she puts a face on the victims of military conflicts and humanitarian disasters. Her photos have received numerous awards and been published internationally. In May, 2008 her book "Afghanistan: Hope and Beauty in a War-torn Land" was published by Bucher-Lounge.

Afghan Female Artists in Berlin
Straightening the Pictures
Cultural self-awareness is gradually awakening again in Afghanistan. An exhibition in Berlin provides a glimpse of it. Contemporary paintings by female Afghan artists can be seen there for the first time. Aygül Cizmecioglu reports

Women's Rights in Afghanistan
Without Hope
The situation of women in Afghanistan has not improved since the overthrow of the Taliban, report Afghan human rights activists. Many commit suicide to escape domestic violence. Claudia Isabel Rittel reports

END_OF_DOCUMENT_TOKEN_TO_BE_REPLACED
Social media
and networks
Subscribe to our
newsletter