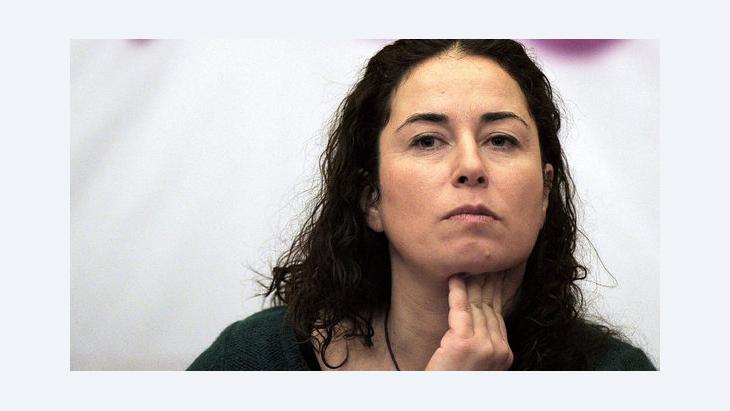 ''I Can Feel a Huge Amount of Solidarity''

How did you feel when you heard the judgement?

Pinar Selek: On the one hand, I feel exhausted. Yet, on the other hand, I continue to remain very strong. It was like receiving news of someone's death, as if you had lost someone who was very close to you. You ask yourself, "Can this be true? Is this right?"

Nevertheless, there are many reasons why I should be strong. On the day of the proceedings, there was an hour-long strike protest action at my university on my behalf. It was the first time in the history of my university that a rector took a public position and said, "No one will be able to lay hold of Pinar without stepping over our dead bodies. Whoever wants to seize Pinar will first have to deal with us." As a result, I can feel a huge amount of solidarity all around me.

I was chosen out as an example in order to frighten others from advocating similar positions to my own. Even if I am killed, although this would be a source of great anguish, I can hear my inner voice saying, "Pinar, can't you see that we have already won this battle?"

Where does the legal process go from here?

Selek: My lawyers will appeal the decision in the Turkish Supreme Court. Afterwards, the case will begin. However, the Supreme Court has declared all of the other previous acquittals as invalid.

A young man, who made his confession under torture, said, "Yes, we organized this terrorist attack with Pinar." Except for this statement, there is absolutely no evidence. And now, I have been sentenced to life imprisonment.

They have presumed that I am a murderer. Maybe no one really believes it, but it doesn't make my life easy. I get death threats in the mail and by e-mail. I have become a target. They are actually attempting to commit murder. 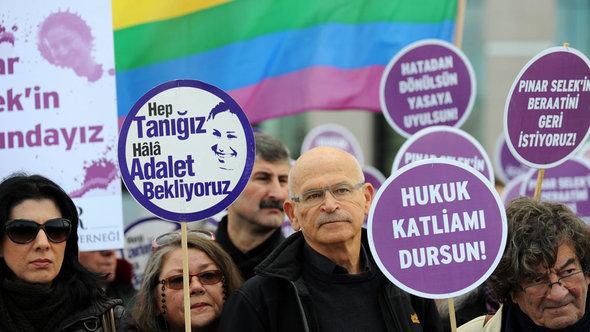 "Justice for Pinar Selek": On 24 January 2013, Selek's supporters demonstrated against the pronouncement of her sentence in front of the Istanbul courthouse. Since 1998, Pinar Selek has been suspected of terrorism on account of her research into the PKK and was accused of taking part in a 1998 bombing in Istanbul. After being acquitted three times (2002, 2006, 2011), she has now been sentenced to life imprisonment

​​Why do you think you have become a target?

Selek: This has long been a topic of discussion. There are many possible reasons. In 1998, they required such a terrorist attack and a victim. They had also arrested me previously on account of my research into the Kurdish problem. Perhaps they wanted to indicate that if I went too far with my research, I would be dealt with severely.

After I was released from prison, the acquittal was annulled, because I continued to take part in public debate. At first, I was made an example through my punishment to deter others, and later, I became "symbol of justice."

Do you intend to apply for political asylum in France?

Selek: I am continuously asked this question. I will discuss with my lawyers as to how I can best ensure my security. If I had wanted, I could have applied for asylum long ago. There are many people here in France who support me. Members of parliament, mayors, everyone… they all say that if I wanted, I could even be granted this status the following day. But this is not the point. I don't know at the moment. It is something I will consider.

The sociologist, author, and feminist Pinar Selek was sentenced in Turkey to life imprisonment. The guilty verdict for the exiled author in a case involving a supposed bomb attack has aroused international outrage. Before receiving the life sentence, Selek had already been charged and acquitted three times for the same offence.

After the attempted coup in Turkey in 2016, 134,000 people lost their jobs. Most of them are still unemployed and have to fight for health services and pensions. Many suffer from ... END_OF_DOCUMENT_TOKEN_TO_BE_REPLACED

The Kurdish YPG militia did the heavy lifting in the fight against the "Islamic State", yet many foreign YPG adherents, including Germans, have come home to find themselves under ... END_OF_DOCUMENT_TOKEN_TO_BE_REPLACED

At least 150 theatre professionals were recently fired without reason in Turkey, just days before they were expecting to receive permanent contracts. Creatives accuse the ... END_OF_DOCUMENT_TOKEN_TO_BE_REPLACED

Political analyst Taqadum al-Khatib argues that Egypt can, in co-ordination with its European partners, develop a common vision to solve the complex conflict in Libya. For this to ... END_OF_DOCUMENT_TOKEN_TO_BE_REPLACED

Turkey's President Erdogan wants to create a second Bosphorus. The cost to the economy and environment would be enormous – and that's why Istanbul's mayor is attempting to stop ... END_OF_DOCUMENT_TOKEN_TO_BE_REPLACED
Author:
Hülya Köylü Schenk
Date:
Mail:
Send via mail