Skip to main content
Interview with Prince Hassan of Jordan

"Why Do We Blame Everything on Religion?"

Prince Hassan of Jordan has been awarded the Abraham Geiger Prize for 2008 in recognition of his advocacy of ecological sustainability, reconciliation and dialogue between the religions. Nasser Jubara and Bassam Rizq spoke with him 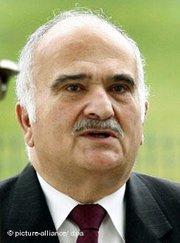 Prince Hassan of Jordan: "We must revive the principle of Shura and bring together the various Islamic schools of law as well as the Sunnis and Shiites

​​You regard the dialogue between Muslims, Christians and Jews as a necessity. Could you give us a practical example of this kind of dialogue in the Islamic world?

Prince Hassan: A concrete example of cooperation is a school being built in Rwanda by Jewish volunteers who discussed their plans with both the Rwandan government and the country's official Mufti. This and similar projects are being undertaken by peace groups in various areas of the world. And when we speak of historical Palestine, I am proud to note that I am currently doing peace work with 125 NGOs.

We are lobbying for a stop to the construction of the Israeli wall of hate and working toward people taking a more positive view of their fellow human beings. I regard the negative state of affairs in the Gaza Strip and in occupied Palestine as a form of escalation between two sides that both believe in military solutions. At the moment we are trying to prevent any further divisiveness and aggravation of the religion- and confession-based conflict in the region.

It is well known that you do not believe in the theory of the battle between cultures. But is there nonetheless a kind of cultural conflict, and on what level?

Prince Hassan: In my opinion there is one single world culture that runs like a thread through the history of civilization and from which we profit as well as contribute to. The yardstick for measuring the degree of civilization is the richness of our cultural heritage, the diversity of which we must try to preserve. This is a goal to which people all over the world should be committed.

We stand for respect for cultural differences and we value religiosity. The cultures of which we are speaking are the culture of peace and a culture of responsible participation and national citizenship far removed from egotism. Isolation and defensiveness arouse feelings of enmity against others and create a security problem. All that comes of this is hate, together with profits for the arms industry.

Peacefulness, cooperation and tolerance based on mutual respect can only come about with the proper educational background. That's why I welcome European programs supporting dialogue, because we are striving for a world citizenship to form a counter-weight to globalization, which only serves materialism and the bourgeoisie. Four billion people on this planet are living in poverty. This is where religion can play a part, not merely as edification for the faithful, but by propagating science and practical work. Believers should put their energies into building hospitals and schools and doing charity work.

What responsibilities do the Western and Muslim media have in terms of breaking down prejudices and stereotypes on both sides?

Prince Hassan: With reference to the degrading Mohammed caricatures, I can state emphatically that Islam as civilization and as faith and values system is far above being damaged by such pictures or other primitive insults. I would also like to stress that publishing such malicious images in the media is not conducive to social peace in the world.

Those who profit from such actions are not the disadvantaged silent majority but rather "religious mavericks" who instrumentalize the faith for political and personal ends. It would be better to emphasize the positive rather than the negative. Who is reporting for example on the collaboration of the Catholic Council of Churches with the Asian Muslim Council in Cambodia and Thailand to help child victims of slave trafficking?

The role of the media consists of cooperation between scholars and scientists and representatives of civil society against extremism and against the concealment of the truth. Media are also capable of rapidly communicating images that depart from the cliché. The version published in the press is not always the only correct one.

You call for cooperation between cultures and religions. Is that enough to lessen the gulfs and conflicts that keep people apart?

Prince Hassan: Some people are calling for a separation of church and state. I would rather see religious authorities rise above day-to-day politics and not represent a particular political program. Religion is there for God, the land for everyone, as we like to say.

A British historian once said that wrongly understood patriotism is a distortion of historical facts and can lead to artificial hatred amongst neighbors. We can choose between rational co-existence on the basis of paramount mutual interests while respecting our differences as an expression of civilization, or continued bloody confrontations while switching off our sense of reason.

You recently received in Berlin the award in the name of Jewish thinker Abraham Geiger for your efforts in promoting dialogue between the cultures. Germany is the country of reformer Martin Luther. Do the Muslims need their own Martin Luther?

Prince Hassan: The Lutheran reform at first led to bloodshed between the new confession and the Catholic Church. I would like to recall here the wisdom of Sheik Sahrawardi, who said: The sun rises in the East and for this reason I believe that the reform and renewal we hope for must come from ourselves.

We must revive the principle of Shura (consultation) and bring together the various Islamic schools of law as well as the Sunnis and Shiites. I would wish for such a meeting to take place in Mecca so that it can radiate its message to the growing number of groups being formed in the name of religion.

Islamic-Jewish history has been characterized for centuries by peace and tranquility, something that not all cultures have been able to achieve. Muslims and Jews were both victims of the inquisition courts and fled to the Ottoman Empire. It wouldn't hurt us to enter into a dialogue with the Jews of the world as part of a meeting of believers.

Don't you believe as well that political conflicts, especially in Iraq, Palestine and Afghanistan, compromise the dialogue between cultures?

Prince Hassan: That's exactly what it's all about! Why do we blame everything on religion? The dialogue between the Creator and humanity is based on convictions. Everything we are experiencing in today's "dialogue of hatefulness" is man-made.

Essay Naika Foroutan
A Dialogue of the Cultures Instead of the Clash of Civilisations
The issue of cultural dialogue always crops up when things have already started to go wrong. But that dialogue is not some short-term emergency measure, writes Naika Foroutan. In her essay, she discusses the basic principles of dialogue

Twenty years after 9/11, the world is faced with the dual challenge of Islamophobia and anti-Westernism. Ahmet Kuru argues that Muslims in the West, well versed in both Western ... END_OF_DOCUMENT_TOKEN_TO_BE_REPLACED

The façade of a twelfth-century cathedral is an unlikely place to find a message in Arabic script carved in stone, but so it is in the Portuguese city of Coimbra. Marta Vidal ... END_OF_DOCUMENT_TOKEN_TO_BE_REPLACED

A bird's eye view of eight hundred years of history: Brian A. Catlos tells the story of Al-Andalus in the style of a streaming series and deconstructs the myths of the Reconquista ... END_OF_DOCUMENT_TOKEN_TO_BE_REPLACED

A recent nationwide, multi-faith public-opinion survey has found that Indians value both religious tolerance and co-existence, on the one hand, and religious exclusivity and ... END_OF_DOCUMENT_TOKEN_TO_BE_REPLACED

Despite over a thousand years of co-existence, India's Hindus and Muslims often know little about each other's religious traditions. In an effort to promote understanding and ... END_OF_DOCUMENT_TOKEN_TO_BE_REPLACED 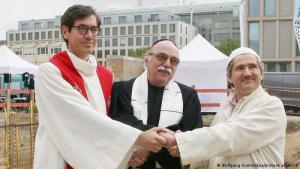 House of One: Berlin lays cornerstone for religious understanding

Last week, in the heart of Berlin, a group of Christians, Jews and Muslims laid the foundation stone for a joint house of worship that will feature a church, a synagogue and a ... END_OF_DOCUMENT_TOKEN_TO_BE_REPLACED
Date:
Mail:
Send via mail

END_OF_DOCUMENT_TOKEN_TO_BE_REPLACED
Social media
and networks
Subscribe to our
newsletter