Interview with Salah Stétié
"The Arabic Language Is Outmoded"

The Lebanese poet Salah Stétié writes in French, because he believes the Arabic language is out of date. That is why he is appealing to Arab intellectuals to take an active role in modernizing the Arabic language. Interview by Saleh Diyab 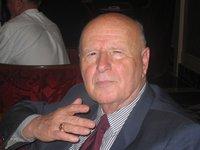 The Arabic language is simply not up-to-date, says Salih Stétié

​​What sort of relationship do you have to the Arabic language? Why don't you write in Arabic?

Salah Stétié: With all due respect for the Arabic language, it is simply not up-to-date. As a poet, I must either create a language within Arabic to be able to reflect the development of the Arab human being that I am, or I must use a foreign language.

Many writers prefer Arabic and are constantly preoccupied with changing the canon of words to suit their needs. For example, Naguib Mahfouz's language is full of mistakes if we follow the criteria of the ancient grammarian Sibawaihi. If Mahfouz had not made these mistakes, no one would have read him, and none of his books would have been translated. He is a monument to the development of contemporary Arab culture.

Other authors have decided to use a foreign language. I am one of them.

My reason for taking this step is a historical one, no more and no less. It has to do with the past, with mandatory rule and imperialism. Many Arab writers adopted the language of their mandatory or colonial rulers out of necessity. They used their language in order to antagonize and even surpass them. And, in fact, they write at a very high linguistic level. Whether we want it or not, cultures are open to each other nowadays. We must accept this opening.

Can you write more freely in French; do you thus circumvent the obstacles that stand in the way of an Arab author in the form of society and religious and political authorities?

Stétié: The Arab author has no financial income whatsoever. The publishers receive no support, either. And there are no readers in the Arab world. In our countries, readers have the lowest educational level in the world. In Germany or France people read one book a year on average, in the Arab world, a quarter of one newspaper column.

There is no real literary criticism in the Arab world. What you do find reflects the horizons of Arab thinking. The reviews in newspapers and books are purely descriptive. There are no important Arab literary magazines. The situation is truly disastrous.

Are the novelists and poets who do not write in Arabic Arab authors, in your opinion? Do they influence Arabic literature indirectly, possibly even the language, although they do not write in it?

Stétié: If an Arab author writes in a widely read language, such as English, French, Portuguese, or Spanish, he can reach his readers quickly. If he writes in Arabic, his work must first be translated into another language before he can attract international notice.

There are great Arab writers in every language – Spanish, English, French, and German. They express the concerns of Arabs and paint a realistic picture of Arab life. They are ambassadors of the Arabic language abroad. The Arab author does not forget his roots but continually comes back to the problems that have shaped him.

Do you think that one should penetrate the aura of sacredness that surrounds the Arabic language, and how can this be done, in your opinion?

Stétié: Poets, in particular, strived for a liberated, profane language. The sanctity of Arabic implied the rejection of new words, since they were not legitimized by the Koran or by tradition. One had to strictly adhere to traditional Arabic grammar so as not to destroy its exalted foundation, and, in particular, it could not be augmented with foreign words, least of all those from cultures outside the Islamic world or a language of unbelievers.

Arab poets of the modern age attacked this exalted foundation. They wanted to open the door to the thinking and perceptions of the new world. All these new ideas had to be expressed with new words.

One last thing: In the past, when Arabs themselves were the creators of the modern age, they introduced many words from Persian and Latin into the Arabic language. What is more, they passed on the works of all the non-Arab philosophers and thinkers, as a matter of course, in order to incorporate them into the Arab world. They were firmly convinced that the ideas of these creative figures had to be made accessible to all of humanity. May this view of the ancients be a lesson to us …

END_OF_DOCUMENT_TOKEN_TO_BE_REPLACED
Social media
and networks
Subscribe to our
newsletter