Interview with Sherry Jones
"My Novel Presents a Bold Aisha"

Sherry Jones's novel about the life of Aisha, Mohammed's favourite wife, was withdrawn by Random House shortly before it was due to be published for fear it might offend the religious feelings of Muslims. In this interview with Nimet Seker, Sherry Jones talks about the incident and her real motives for writing "The Jewel of Medina" 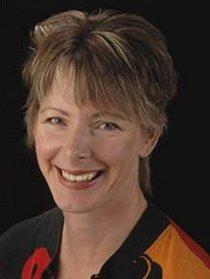 "What's exciting is that this incident has sparked a worldwide discussion over censorship and free speech," says Sherry Jones when asked about the difficulties of getting her novel published

Sherry Jones: My intention in writing "The Jewel of Medina" was to tell a great story, and in the process of doing so, to illustrate to readers both Muslim and non-Muslim the crucial role of women in the founding of the early Islamic community. You won't find sex scenes in its pages, but you will find women praying alongside men in mosques, fighting alongside men in battles, and advising the Prophet Muhammad on politics.

You'll also read about the early battles of Islam and learn about Muhammad, his closest Companions, and his wives and concubines as human beings with human frailties and flaws who must use their wits and their courage to prevail. And you will, I hope, find inspiration in Aisha, not as a sacred figure but as a flesh-and-blood woman who suffered jealousy as she watched the man she loved marry again and again, who had to learn challenging personal lessons about the real meaning of love and faith, and who had to battle the constraints of her culture to reach her own highest potential.

In the process, I hope you will learn about the origins of Islam and Muhammad's intentions for the religion, and recognize that violence, hatred, and oppression of women is not Islamic. In other words, I hope to promote a greater understanding of Islam in its pure form, and to dispel racism against Muslims.

How do you rate the fact that Random House withdrew from publication of "The Jewel of Medina" on the Islam expert Denise Spellberg's advice?

Jones: It wasn't just her advice, but also concerns of two other academic scholars whom the publishing house contacted, as well as the corporation's head of security. To answer your question, I think fear got the best of the decision-makers there, and that they over-reacted. But I understand why they did so. Our entire culture in the U.S. has been permeated by fear and loathing of Islam since the Sept. 11, 2001 attacks on the World Trade Center and the Pentagon.

It began with the televised images of people leaping from burning buildings, and was perpetuated by President Bush's rhetoric calling countries in the Middle East an "Axis of Evil." Obviously, I refused to succumb to this fear-mongering, or I wouldn't have written, or published, the book.

​​ What's exciting is that this incident has sparked a worldwide discussion over censorship and free speech. The issue isn't Random House at all, but our response as a culture to the perceived threat of violence by those offended by certain forms of expression, including artistic expression. Many similar acts of self-censorship happen all the time, in deference to extremists of various beliefs. Because of the postponement of "The Jewel of Medina," people are waking up and paying attention to these attritions of free speech. That's a good thing, because if we don't use it, we'll lose it.

What is your view of the debate in the Western media, which – like Spellberg – always assume aggression from radical Islamist forces – in this case even before your novel was published?

Jones: I think it's racist to assume that an offended Muslim will resort to violence.

A number of female Muslim writers have reviewed the novel and entered into a dialogue with you. Their critiques emphasise that your portrayal of Aisha is not realistic, despite the two years you spent on research. Can you understand this criticism?

Jones: Actually, I spent five years researching and writing "The Jewel of Medina." I think the Muslim women reviewers are dismayed to see their own versions of Aisha appropriated and altered by a non-Muslim. According to Denise Spellberg, nothing was written down about Aisha until 150 years after her death, and so her life story, rather than being rooted in unalterable fact, is an appropriation by men – by her male biographers. It is all interpretation.

Even the hadith attributed to her were transmitted by men. My novel is simply another interpretation, one that presents a bolder Aisha than these women have heard about in the madrassa. It surprises, and, in some cases, offends them.

But I am not so arrogant as to think that I have presented the definitive version of Aisha. My novel is rooted in history, but it takes liberties. I encourage Muslims, especially women, to share their own versions of Aisha, their own interpretations of her life and its significance. I have created a space on my website's message board for that purpose. Go to http://www.authorsherryjones.com and click on "Join the Conversation," then write away! I am inviting everyone to participate, in any language.

​​ Western critics, on the other hand, accuse you of portraying Muhammad in an overly positive, one-sided way. How did you go about your research, and which Islamic sources is your work based on?

Jones: Yes, and one German critic chastised me for being too soft on Muhammad and too harsh on Ali! There is no pleasing everyone with a book like mine. Remember, the book is written from the point of view of Aisha, who supposedly loved Muhammad very much. I'm sure another wife – one of his Jewish wives, for instance – would have a different view of him.

As for sources, I read everything I could find in the English language. My primary sources were Denise Spellberg, Fatima Mernissi, Ibn Kathir, Nabia Abbott, and Karen Armstrong. The German Islamic scholar Stefan Weidner has noted in the Frankfurter Allgemeine Zeitung that "The Jewel of Medina" is essentially a faithful re-telling of the Islamic traditions for a Western audience. Of course, the "reader-response" theory holds especially true with my book, because every person who reads it will come away with a different interpretation, based on pre-conceived ideas he or she brought to the text before even opening the book.

I feel satisfied with "The Jewel of Medina," and pleased with the debate that it has generated. By introducing Aisha to the Western world, and portraying the empowerment of women that occurred during early Islam, I have accomplished exactly what I wanted to accomplish in this book. In my sequel, readers will witness Aisha's full flowering as a mature woman and great political leader, develop empathy for Ali, learn how the rights of women came to be curtailed after Muhammad's death, learn about the origins of the Sunni-Shia split, and, I hope, consider whether revenge is a productive or destructive force.

The Emergence of Islam
No Prophet Named Muhammad
"To shed light on the dark beginnings of Islam" is the call of Karl-Heinz Ohlig, editor of the volume "Early Islam". Its authors claim to be able to trace the actual emergence of Islam through recourse to "contemporary sources". Daniel Birnstiel has read the book

An Anti-Biography of the Founder of Islam
The Mohamed Myth
The Dutch Arabist Hans Jansen has ventured to write a biography of the prophet Mohammed. His initially plausible criticism of the religious sources quickly turns into a sweeping condemnation, however, according to Islam expert Stefan Weidner

Reza Aslan's "No God but God"
Demonstrating the Modernity of Islam
Reza Aslan is an Iranian-American writer whose first book, No God but God, met with widespread acclaim. In her review for Qantara.de, Helena Sabbagh praises Aslan's combination of academic knowledge and an easy-to-read tone

END_OF_DOCUMENT_TOKEN_TO_BE_REPLACED
Social media
and networks
Subscribe to our
newsletter