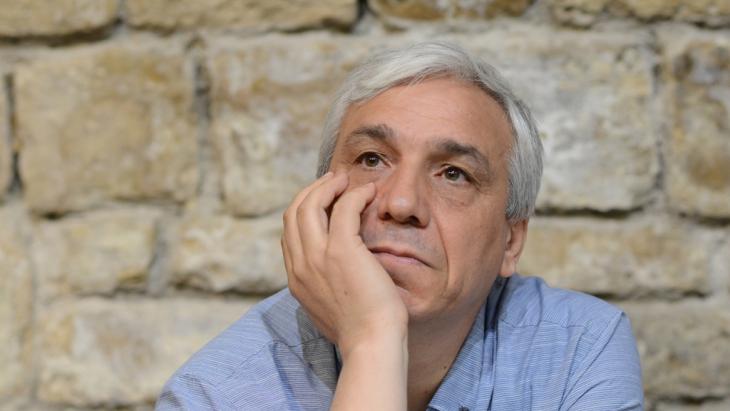 Syrian intellectual Yassin al-Haj Saleh was a revolutionary from the very first. He remains harshly critical of all those political observers and experts in the West who claim that there is no alternative to Assad and that shoring up the regime would be the lesser of two evils. Interview by Emran Feroz

You were jailed by the Assad regime for sixteen years. The reason given was your membership of the Syrian Communist Party. Can you briefly describe what happened to you?

Yassin al-Haj Saleh: Firstly let me explain the historical background of communism in Syria. A rift developed in the Syrian Communist Party (SCP) in 1972 on issues relating to the dependence on the Soviet Union and the understanding of various Syrian and Arab issues. Another important topic at that time was the liberation of Palestine and the Arab League. Subsequently, the party′s attitude towards the Assad regime also became important. One faction sought independence from the Soviet Union and adopted a more radical stance towards Israel. The other one towed the Soviet line and allied itself with the Assad regime. I belonged to the former.

I was a medical student and politically active at the University of Aleppo when I was arrested. We were crushed as a party because we actively opposed the regime, not because we were communists. People with different ideological backgrounds were good for the regime. As long as they were obedient, they were free to be communists, Islamists or Arab and Kurdish nationalists. As soon as they crossed the line, they were eliminated.

For Hafez al-Assad′s regime absolute power over the population of Syria and the surrounding region, including Lebanon and Palestine, was top priority. Opposing this regime of political slavery was considered the gravest crime. I was one of many who rebelled. However, I would never have believed that I would end up in jail for sixteen years. I even spent one year in Syria′s infamous torture prison, Tadmur.

Considering what happened to you, aren′t you surprised that many people, especially in the west, celebrate the Assad regime and defend its secularism and how it treats minorities?

Al-Haj Saleh: Bashar al-Assad′s regime is by no means secular; it is sectarian. When it comes to Muslim-majority countries, many people in the West tend to adopt what I call Huntingtonian secularism, defining secularism in an oversimplified culturalist way as something that is basically against Islam.

Many people in the west simply know nothing about Syria. Most media coverage about Syria consists of simplifications, showing Bashar al-Assad in expensive suits, accompanied by his rich and elegant wife. Reference is also usually made to his Alawi minority status, demonstrating that he is not from the Sunni Muslim majority from whom, of course, minorities need to be protected. Such coverage is rife with Islamophobic sentiments.

This myopic interpretation has made it easier for many to identify with the thuggish regime, rather than with those who were invisible for decades and are now rising up against Assad. The rhetoric of supposed ″minority protection″ traces its roots back to the legacy of the colonial powers and their discourses and practices. According to colonial logic, the Middle Eastern minorities are threatened by the Muslim majority, which is why they need protecting by the "civilised" Western powers.

In view of the jihadist threat, the Assad regime enjoys the particular support of the Western European left. What do you think about the stance adopted by Western left-wingers towards the Syrian revolution?

Al-Haj Saleh: I find it shocking that elements of the left in the west have sided with a brutal, corrupt and sectarian regime – a dictatorship which for half of a century has depended on the existence of a predatory class that exploits the impoverished and unprotected Syrian population, squeezing public resources dry while depositing billions in foreign banks. Many left-wingers in the west know that Hafez al-Assad ruled Syria for thirty years. They know that he transformed Syria into a dynastic monarchy ruled by the Assad family. They also know that this is a grave breach of the very concept of republic. Why have they never spoken out about this?

One problem is that all those who define themselves as anti-imperialists tend to identify our struggle as a regime change plan in the US sense, which naturally they reject. In the process they ignore Syria′s entire history, its society, political life and economy. At the same time, they feel encouraged to regard everything that happens in Syria in anti-imperialist terms, forgetting that regime change back in 2011 was our own initiative as Syrians! We were the ones who set out to overthrow the barbaric regime. 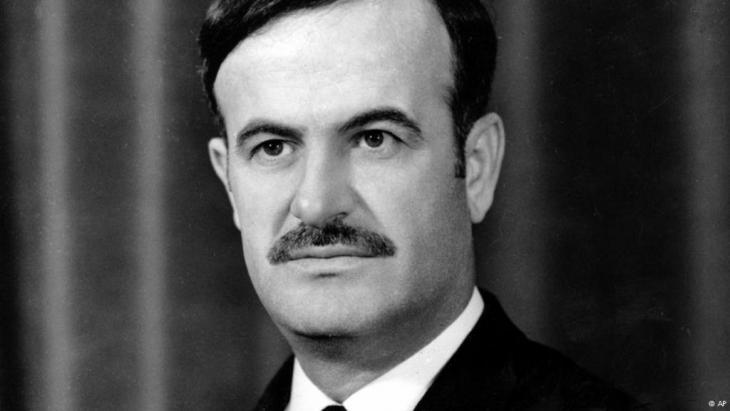 Like father, like son: in February 1982 the town of Hama in north-western Syria was the scene of a brutal massacre lasting several weeks. On the orders of the then ruler, Hafiz al-Assad, much of the town was destroyed, while tens of thousands of people were killed or arrested. Many remain missing to this day

Last December the regime recaptured Aleppo. The narratives regarding the taking of Aleppo are very different. One side talks about genocide and mass murder by the regime and its allies. The other claims that the city has been liberated from "terrorists". Which side, in your opinion, is on the "right side of history"?

Al-Haj Saleh: I think it is dreadful to use the term "the right side of history". Who are these beings who observe history and are thus able to decide who was in the right and who in the wrong? Genocide is a powerful term which needs to applied with caution. It would be more legitimate to apply it to the whole course of continuous systematic torture, killing, bombing and forced displacement which has taken place over the last six years. Those who were displaced were mainly local residents and those who captured the city were aliens: the regime′s army and foreign Shia militias from Lebanon, Iraq, Pakistan or Afghanistan. Finally, it was the carpet bombings of imperialist Russia that facilitated the entire campaign. Aleppo was basically just a reconquest.

Is it right to assume that extremist groups now dominate the rebellion? How did this happen?

Al-Haj Saleh: It has been a gradual process. The revolution began with peaceful demonstrations that went on for months – yet which from the very beginning were met with brutal force by the regime. In September 2011, almost six months after the revolution, Syrian protesters requested international protection. Many Syrians assumed that the world would not abandon them to their fate the way it had done in 1982 during the massacre in Hama. One reason for this collective assumption was the democratic rhetoric that provided the accompanying narrative for the West′s interventions in the former Yugoslavia in 1998, in Iraq in 2003 and in Libya in 2011.

Yet international protection was not forthcoming. Armed resistance began to increase: vulnerable people who had lost their trust in the world started to rely instead on weapons. A dynamic of radicalisation, militarisation and Islamisation was triggered. It was foreseeable that people who were previously not radical would become radicalised. Many without a particular reputation for piety became Islamists over night. And let′s not forget the external factors: the masses of petrodollars from states like Saudi Arabia and Qatar, not to mention the Salafist networks in the Gulf. The current situation in Syria is the ideal environment for Salafist jihadists to prosper.

Yassin al-Haj Saleh is a well-known Syrian dissident and author, who spent 16 years in prison under Hafiz al-Assad. He is regarded by many as the ″conscience of the Syrian Revolution″. His books include ′Syria in the shadows: Glimpses inside the black box′ (only available in Arabic)

EU parliamentarian Dietmar Koester criticises the Union's failure to speak up when faced with human rights abuses committed by its Middle Eastern allies, while pointing out that ... END_OF_DOCUMENT_TOKEN_TO_BE_REPLACED

U.S. President Biden has announced he will be excluding Saudi Crown Prince Mohammed bin Salman from future talks between Washington and Saudi Arabia. Is this just lip service that ... END_OF_DOCUMENT_TOKEN_TO_BE_REPLACED

The foreign policy direction favoured by Washington's new incumbent is putting a strain on relations with Turkey. The two nations look set to clash over a whole host of issues, ... END_OF_DOCUMENT_TOKEN_TO_BE_REPLACED

How can we truly appreciate the richness of cultures not our own? In her recent book "What is Islamic art? Between religion and perception", art historian Wendy Shaw explains the ... END_OF_DOCUMENT_TOKEN_TO_BE_REPLACED

In his controversial book published in 2020, French author Pascal Bruckner describes anti-Muslim sentiment as a fiction, claiming that the term "Islamophobia" is being used to ... END_OF_DOCUMENT_TOKEN_TO_BE_REPLACED

Several media reports in recent weeks have focused on the potential threat presented by Islamist groups in Germany. The discourse is fraught with generalisations, both sides ... END_OF_DOCUMENT_TOKEN_TO_BE_REPLACED
Author:
Emran Feroz
Date:
Mail:
Send via mail

END_OF_DOCUMENT_TOKEN_TO_BE_REPLACED
Social media
and networks
Subscribe to our
newsletter