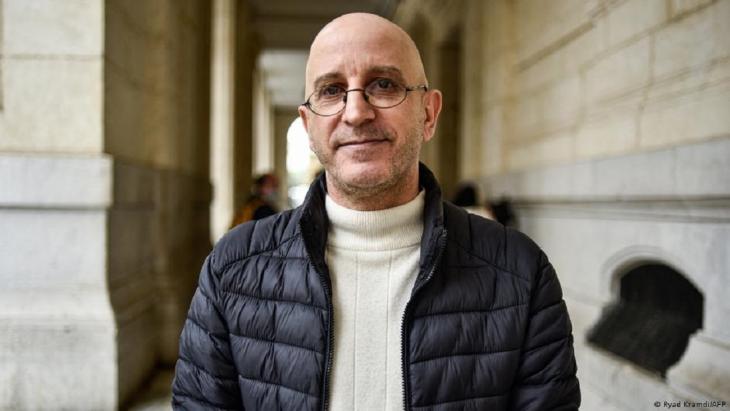 Algerian scholar Said Djabelkhir rejects the charge of "offending Islam". In interview with Ismail Assam, he maintains that he has been wilfully misconstrued. At the same time, he stresses that he was talking in a "historical" manner about Islam, calling for it to move on from the era of fatwas and to look critically at Muslim religious heritage

The court has given you a three year sentence. What are the details of this ruling?

Said Djabelkhir: I am not able to speak about this from a legal perspective. Suffice it to say that I was very surprised that the ruling was so severe. The verdict may be sound, but logically it should not carry a prison sentence. The ruling was made, but the sentence is still pending, so I am free and I am preparing my defence for the appeal.

You have uttered many controversial opinions, including those about the hajj pilgrimage being a pagan rite and fasting during Ramadan a matter of personal choice. This is what your plaintiffs describe as mocking religion. What’s your take on this?

Djabelkhir: The plaintiffs and their lawyers are mangling my words. They don’t limit themselves solely to what I say, but rather they venture into speculating about intent by saying what I mean by this or by that. As for hajj, I spoke about it from a historical perspective. I said that it was an ancient rite that existed before Islam. Similarly, a number of the rituals, such as the sa'i between al-Safa and al-Marwa, were first practiced in a pagan context. This matter is mentioned in Surat al-Baqara (The Cow) Verse 158 and in Surat al-Hajj (The Pilgrimage) Verse 67, as discussed in the tafsir or Koranic commentaries.

I merely passed on what was already there. Thus, in the case of al-Safa and al-Marwah, the early Muslims were awkward about performing this rite and they told the Prophet that they had practiced it before Islam. And again, before the Prophet Muhammad's migration (or hijra), he himself used to pray in the Ka’aba, even though it still housed pagan idols that were not removed until the Conquest of Mecca (in CE 629).

As for fasting, I was asked on a TV programme about young men who get picked on by security for not observing the fast, and I replied that fasting in Islam began on a voluntary basis. This is underlined by the widely held interpretation of verse 184 of Surat al-Baqara. There is full agreement in all the tafsir that the companions of the Prophet Muhammad fasted voluntarily. If anyone did not want to fast without a Sharia (Islamic law)-approved pretext, he would have to pay the fidya (religious donation paid in lieu of fasting).

Is this related to the fatwa you issued?

Djabelkhir: Certainly not. I have no right to issue a fatwa. Only those in an official position can do that. People interpreted my words as if they constituted a fatwa. Yet if we take the example of fasting, I put forward a historical view of this tenet. For a start, I don’t believe in the fatwa or the legal argument for it. Moreover, I speak as a scholar specialised in Sharia, which the plaintiff and his supporters, by the way, are not.

Why do you reject the logic of the fatwa?

Djabelkhir: Because it imposes religious tutelage on people. We have to look elsewhere to find a specialist in the field to give us information and analysis, whilst Muslims can think for themselves about what is right for them. There are other opinions, too, that the only one who has the right to issue a fatwa is God.

But even the most progressive Muslim countries have official fatwa councils, and this is something which many defend in order to avoid chaos. Isn’t that the case?

Djabelkhir: Yes, but fatwas are generally traditional. In my considered opinion as a scholar, the era of the fatwa is over. We need to train researchers to provide information and analysis to Muslims for them to choose. Similarly, these researchers should give the information in full, rather than trying to suppress it. Some scholars were upset when I spoke about the historical background to fasting. The idea of hiding information no longer works because the sources can be found online.

Among the other opinions which sparked controversy was that you called for music to be performed in mosques?

Djabelkhir: All I said is that "I would like to see mosques breaking out of their traditional formula". Did you know that some mosques in the Kabylie region host theatrical performances and film shows outside prayer times? The mosque can also be a cultural centre for the arts.

But there are others who say that this is not permitted from a religious point of view in Islam.

Djabelkhir: There are differences of opinion about music. There are jurists who allow it, such as Ibn Hazm who rejects all hadiths forbidding music. Imam al-Ghazali is of the same view. Personally, I don't think music is forbidden. And so long as it is halal, why shouldn’t music performances be staged in mosques?

You say that those who attack you are Wahhabist Salafists who are on a religious path that is alien to Algeria’s religious culture.

Djabelkhir: Correct. We need to accept that Wahhabism is an import that entered Algeria as far back as the 1920s, as records show.

OK, so what is the predominant religious culture in Algeria?

Djabelkhir: Wahhabism dominates in the media, and most of the influential TV channels and websites are of a Wahhabist orientation. The majority of the Algerian people are conservative, not Wahhabist, but they are subject to heavy Wahhabist influence because of these channels.

The lawsuit against you was filed by a civil party, not the Public Prosecutor’s Office. Could this set a precedent for allowing citizens to try religious scholars?

Djabelkhir: This case in particular is likely to open the floodgates. Anyone who disapproves of what an expert says will go and file a complaint against him. Thus, justice will be transformed into a space for debate and not for serving the people and resolving their legal disputes. Intellectual debate is for the media, universities and cultural centres, not the courts.

Is there a danger of strengthening the hardliners after the Hirak movement in Algeria, especially since those countries which saw revolutions also witnessed the emergence of radical Salafist tendencies, as we saw in Tunisia in the first years after the revolution?

Djabelkhir: Yes, personally I think so, both as a scholar and as a citizen. However, these extremist tendencies became more deeply established during the era of Abdelaziz Bouteflika. To be exact, the phenomenon began during Chadli Bendjedid’s time. He brought the Muslim Brotherhood from the Mashriq (East) and encouraged them to take over the pulpits and to infiltrate the universities from the early 1980s, but this influence became deep-rooted during Bouteflika's era.

You are highly critical of the books on fiqh (Islamic jurisprudence), especially the Sahih of al-Bukhari and Sahih Muslim. You contend that there are hadiths which are illogical, even though these books have great importance in the Islamic religious context. Why is that so?

Djabelkhir: We need to sift through and read the old texts anew, the traditional religious writings, and the usual authorities, whether in jurisprudence, the exegesis of the Koran or other such subjects. These books contain many writings which are no longer acceptable and which are completely contrary to reason, intelligence and science, as well as to the language of today and the human and civilisational values which unite the world and humankind.

Muslims cannot live in peace and co-exist with the non-Muslim world if they continue to adhere blindly to these old notions. The "Sahih al-Bukhari", for example, contains hadiths that are completely at odds with the logic of Muslims and non-Muslims alike. There are things which need to be reviewed and re-read, so that they are appropriate to our times and do not put us in conflict with other societies.

Home
Print
Newsletter
More on this topic
Interview with pioneering Islamic thinker Fehmi Jadaane: What is the essence of Islam, and does it need reforming?Interview with Abdullahi Ahmed An-Na'im: "We are in the middle of a transformative process"Execution for a Facebook post? Why blasphemy is a capital offence in some Muslim countries
Related Topics
Free speech and censorship, Freedom of religion, History of Islam, Koran | Quran, Quranic studies | Koranic research, Reform Islam, Sharia
All Topics

Nouara may be 65, but she is ready to join thousands of others who burn their ID and pay traffickers for the chance of a new life in Europe. Zineb Bettayeb reports END_OF_DOCUMENT_TOKEN_TO_BE_REPLACED

In Doha, Arabs from Morocco, Tunisia, Egypt and Algeria are gathering to celebrate the first ever FIFA World Cup to be held on Arab soil. The criticism from Europe? Over the top, ... END_OF_DOCUMENT_TOKEN_TO_BE_REPLACED

"Rebel Game: The Power of Football in the Middle East and the Qatar World Cup", an anthology published by Middle East researchers Jan Busse and Rene Wildangel, takes the upcoming ... END_OF_DOCUMENT_TOKEN_TO_BE_REPLACED

After a two-year hiatus, the Arab League re-convened at the beginning of November in Algiers against a backdrop of uncertainty and discord. By Pierre Boussel END_OF_DOCUMENT_TOKEN_TO_BE_REPLACED

The history of Jews and Muslims is far more entangled than you might imagine – but you have to listen out for it. In "Recording History", Christopher Silver takes us on a sonic ... END_OF_DOCUMENT_TOKEN_TO_BE_REPLACED
Author:
Ismail Azzam
Date:
Mail:
Send via mail

END_OF_DOCUMENT_TOKEN_TO_BE_REPLACED
Social media
and networks
Subscribe to our
newsletter