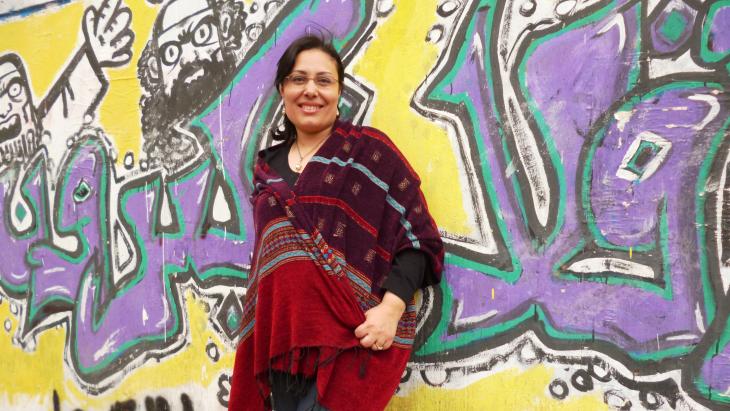 For the renowned Egyptian journalist and writer Mansoura Ez-Eldin, the revolution of 2011 provided literary fodder for essays, short stories and now a new novel. Arian Fariborz spoke with her in Cairo

Your novella "Gothic Night", recently published in English translation, reads like dark fiction in the Orwellian vein. Some readers see the story as an allegory of being unable to escape the clutches of a dictatorship and draw parallels to the political situation in Egypt on the eve of the revolution. Do you agree with this interpretation?

Mansoura Ez-Eldin: In this short story, there is not only one way of seeing things but multiple viewpoints and possible interpretations. In "Gothic Night", I wanted to show how people lose control of their destiny. The novella also reveals the break-off of communication between two people. The inspiration for this story came to me in a nightmare I had a few years ago in which I encountered a big black giant in a cloak running around the streets and pointing at people, who then disappeared. When I awoke with a start, I had the feeling that the dream reflected our lives, that we can simply vanish or die from one moment to the next. It revealed human vulnerability to me.

The story is about two cities. In one of them lives a giant who is blind and who takes away people's ability to see. The other city is on a mountain rising above a stormy sea, and the people there have to continually struggle not to fall into the water. It's all about the constant fight for survival and the omnipresence of death.

Of course, "Gothic Night" can be read as an allegory of dictatorship: I had in mind a society suffering under tyranny and gradually threatening to suffocate. I wrote the story two weeks before the revolution in Egypt, and at that time I indeed had the feeling of slowly suffocating. I had no hope left for the future of our country. My new novel, "Emerald Mountain", which came out in Arabic two months ago, takes up part of this novella, albeit in a different context. 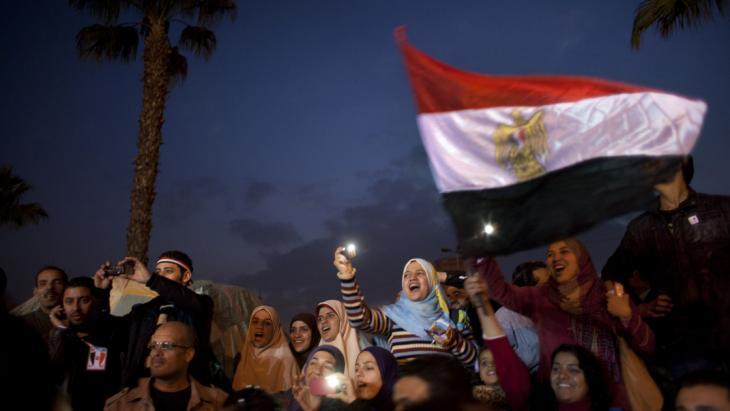 In the early days of the 2011 revolution in Egypt, Mansoura Ez-Eldin was convinced that "we as individuals and as a people could take our destiny into our own hands and change our country and the world". Three years on, the author feels that the current situation is untenable "because all the problems and injustices that already existed before the revolution exist again today"

The Egyptian revolution and the overthrow of the Mubarak system wrested you away from your desk. You went to Tahrir Square in Cairo almost daily to demonstrate with millions of other Egyptians for freedom and democracy. What was your personal experience of the upheaval?

Ez-Eldin: Before the beginning of the revolution, I was in a state of despair. I no longer seriously believed that real change could happen in view of all the repression and the torture scandals such as the case of the activist Khaled Said in 2010. I had the feeling that we were living in a slaughterhouse and not in a state that respects the law and personal rights. But then there were finally some signs that things were changing.

Before 25 January 2011 I was not very politically active, as I generally had no interest in politics. I thought it was all a farce: there was no real opposition and Orwellian conditions prevailed. Everything was a sham, and even the politicians' declarations of their intent had absolutely no truth to them. The revolution therefore seemed like a miracle to me. On the evening of 25 January, I found myself in tears. When I then finally took part in the demonstrations, I suddenly felt very strong as an individual. I was convinced that we as individuals and as a people could take our destiny into our own hands and change our country and the world. I naturally got involved in the revolution mainly because of my daughter, who was eight years old at the time, because I wanted her to live in a better country than I had up until then.

The turning point for me was 28 January 2011, the "Day of Rage". Some friends and I had taken part in a demonstration against Mubarak that began in the Amr Ibn al-Aas mosque. It was a peaceful protest, but the police responded from the very first minute with all-out brutality and violence. Tear gas and rubber bullets were fired at the protesters. It was a very violent day, and I noticed how that affected me very profoundly and enraged me. I felt an almost personal enmity against the regime and this oppression rise up in me.

Was the January revolution the initial spark for a new literary boom in Egypt, or had the trend already begun at the end of the "leaden days" of the Mubarak era?

Ez-Eldin: The literature boom already started under Mubarak, manifesting itself mainly in blogs by young writers, who regularly published posts. The revolution was the legacy of this multifaceted development in the media and on the literary scene. Many of the bloggers later became politically active. There was of course the same rigid censorship and media control back then that there is now, although censorship has social as well as political roots. 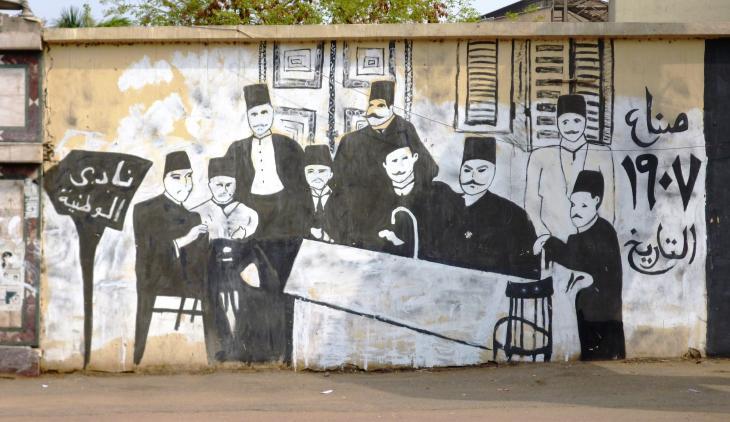 Graffiti depicting representatives of the nationalist Urabi movement in Egypt. According to Mansoura Ez-Eldin, literature in Egypt began changing before the 2011 revolution: "Many writers had long since left the old idols and traditional values behind them and gotten over their grief at the demise of the old nationalism. A new generation of writers and bloggers came of age who saw themselves as 'children of the world'," says Mansoura Ez-Eldin

Despite the censorship, however, the younger generation of writers in particular demonstrated a great deal of courage, breaking many taboos. Publishers such as Mohamad Hashem were very committed in this respect and deliberately encouraged these developments. This then served to inspire further writers.

But the new Egyptian literature had already been undergoing a transformation prior to the revolution. Many writers had long since left the old idols and traditional values behind them and gotten over their grief at the demise of the old nationalism. A new generation of writers and bloggers came of age who saw themselves as "children of the world". And they were the ones who from the outset determined and shaped the rhetoric of the revolution. After the revolution as well, though, new media such as Facebook ushered in a major turning point. Today, there are authors who write completely differently to the generation before the revolution. These are young people who have experienced a great deal in two years. They have been through a social and political earthquake and have freed themselves from many constraints that were formerly taken to be God-given.

The spring of blossoming freedom for Egypt's literary and media talents proved to be short-lived. Today, the familiar old red lines are in place again for independent authors and journalists who are critical of the regime. How did this happen?

Ez-Eldin: When Mohamed Morsi took office, I had the feeling for the first time that freedoms were being restricted. He initially had no control over the media. In December 2012, however, there were many protests, deaths and cases of torture. Media freedom was then gradually restricted step by step after the end of Morsi's rule on 30 June 2013. Since then, there has only been a single voice in the media landscape, and the other mass media are left merely to sing along in harmony. Other shades of meaning are not tolerated.

You once said that the revolution is an ongoing process, so that setbacks for democratic development in Egypt are understandable. Do you think the liberal and secular forces in the country will be able to change course again and steer the country in the direction of democracy?

Ez-Eldin: Today, when I look back at what I wrote in my articles in 2011, my former optimism is almost embarrassing to me. I think that the current situation is untenable – because all the problems and injustices that already existed before the revolution exist again today. I'm afraid that the next wave of the revolution will be more violent, more than we can bear – a confrontation that sweeps away and extinguishes everything in its path. It is like a fight between a player and a madman, where no one knows who the enemy is.

Mansoura Ez-Eldin, born in 1976 in Egypt's Nile Delta, studied journalism at the University of Cairo and worked at "Akhbar al-Adab", one of the foremost literary magazines in Egypt, until August 2011. Her novels have been translated into several languages. In 2010, she was named one of the best Arabic-speaking authors under 40. That same year, she was the only woman nominated for the International Prize for Arabic Fiction. She published her first collection of short stories, "Flickering Light", in 2001. This was followed by three novels, "Maryam's Maze" (2004), "Beyond Paradise" (2009) and "Emerald Mountain" (2014).

Home
Print
Newsletter
More on this topic
Mansoura Ez Eldin on Women's Rights in Egypt: Between Hammer and AnvilThe political mood in Egypt: Between a rock and a hard placeThe Democratic Process in Egypt: The Success of Democracy is Not a Question of Education
Related Topics
Arab Spring, Arabellion, Egypt Revolution 2011, Egypt's army, Egyptian literature, Power struggle in Egypt
All Topics

In Doha, Arabs from Morocco, Tunisia, Egypt and Algeria are gathering to celebrate the first ever FIFA World Cup to be held on Arab soil. The criticism from Europe? Over the top, ... END_OF_DOCUMENT_TOKEN_TO_BE_REPLACED

November 2022 sees the Arab world firmly in the spotlight with the COP27 in Egypt and the FIFA World Cup in Qatar. Public trust in MENA governments is weak, thanks to their ... END_OF_DOCUMENT_TOKEN_TO_BE_REPLACED

Palme d’Or winner "Boy from Heaven" is a classic crossover film in which cultural elements are mixed together in haphazard and random fashion. Shady Lewis Botros bemoans the ... END_OF_DOCUMENT_TOKEN_TO_BE_REPLACED

COP27 in Sharm el-Sheikh is turning into a PR disaster for Egypt’s military regime. Instead of praise for the host, the news is full of solidarity for imprisoned activist Alaa ... END_OF_DOCUMENT_TOKEN_TO_BE_REPLACED

"Rebel Game: The Power of Football in the Middle East and the Qatar World Cup", an anthology published by Middle East researchers Jan Busse and Rene Wildangel, takes the upcoming ... END_OF_DOCUMENT_TOKEN_TO_BE_REPLACED

Comments for this article: "The current situation is untenable"

graffiti attached to the article

as far as I know the graffiti shows rather the founders of al-Ahli Club. interesting article.

END_OF_DOCUMENT_TOKEN_TO_BE_REPLACED
Social media
and networks
Subscribe to our
newsletter